Gateway is a go, construction start expected next spring 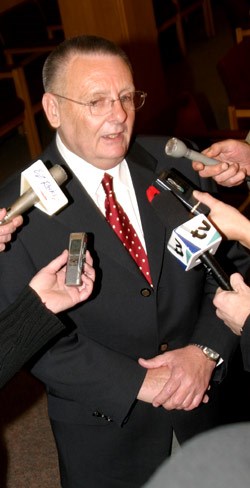 Subject to due diligence that must now be carried out by Northern Ontario Heritage Fund Corp. (NOHFC) and final approval of the provincial funding by Management Board of Cabinet, construction is expected to start next spring.

The massive waterfront project is expected to be finished in the spring of 2007.

City officials had been concerned about what might happen if Garforth and his group started construction but failed to complete the project.

But PCL agreed to provide a $53 million performance bond, ensuring that the job will be completed.

Councillor Manzo wouldn't accept assurances from Garforth lawyer Bob Paciocco about the performance bond, and announced he would only vote in favour of the project if someone could show him the actual bond.

City officials had also fretted about financial risk to the municipality if the Garforth development, known as Borealis, didn't continue operating until all NOHFC terms and conditions were met.

The agreement in principle approved tonight eliminates that risk by ensuring that the remainder of NOHFC funds are not advanced until all terms have been met.

Here's the resolution that all City councillors except Manzo voted for tonight:

1. approve the principal agreement and authorize execution of the agreement setting out the terms and conditions for advancing the Northern Ontario Heritage Fund Corp. project funding to Legacy Quest Developments Inc.; and

2. authorize submission of the Gateway Project NOHFC Stage 2 application based on the principal agreement and Borealis report; and

3. authorize City staff to prepare a contract with Trow Consulting Engineers Ltd. to prepare a site-specific risk assessment for the property; and

4. authorize City staff to negotiate the purchase of Algocen Realty's property between the Gateway site and St. Mary's River Drive be approved