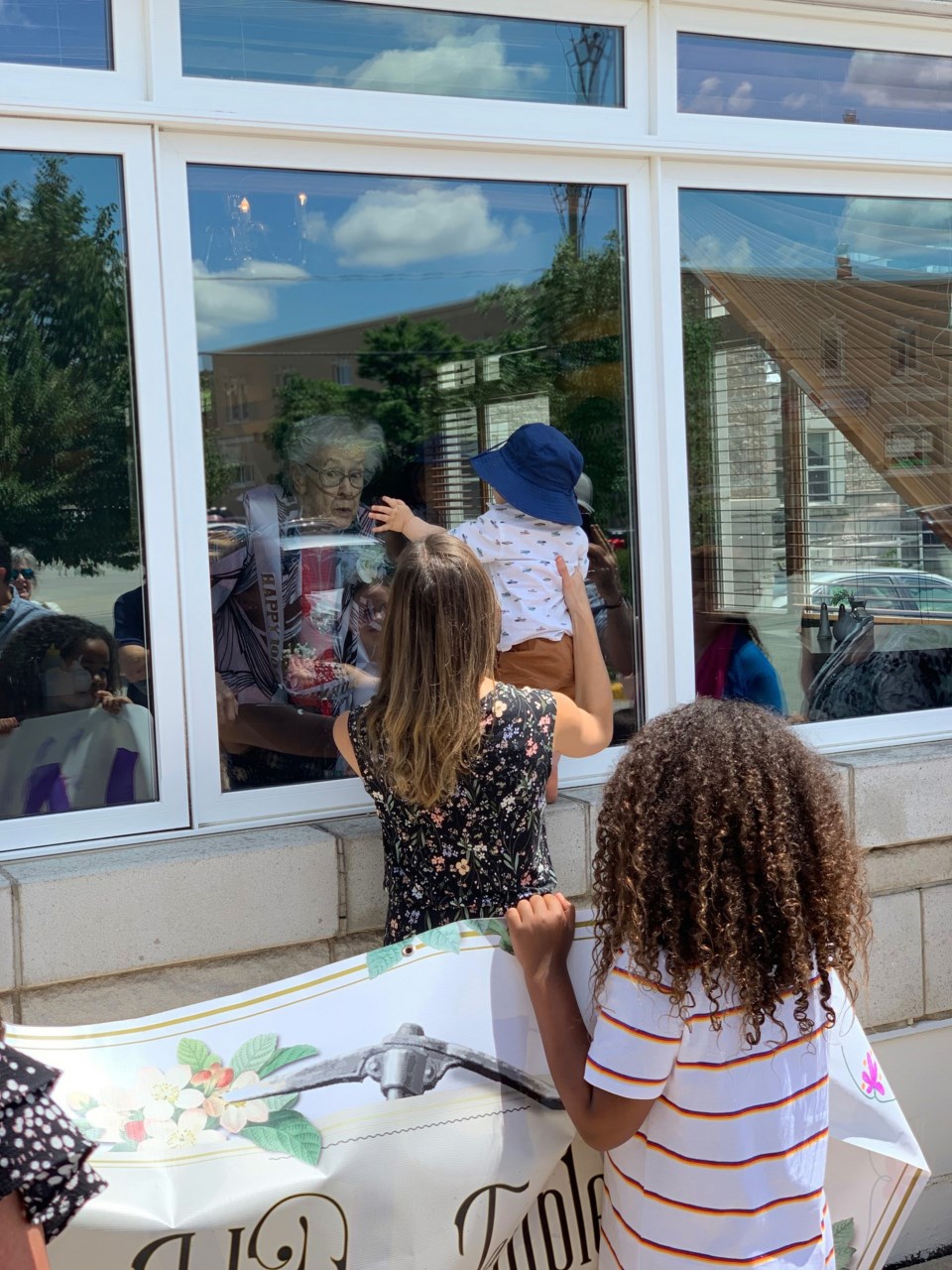 Margaret Dobie, a former Sault resident who left her mark in the community as a trailblazing registered nurse and community figure, celebrated her 100th birthday June 25.

Now a resident of Central Place Retirement Community in Owen Sound, Margaret’s children, grandchildren and great-grandchildren greeted her at the window of the retirement home.

“They couldn't have a birthday party for me (with her family inside Central Place, due to COVID-19 restrictions).”

However, Central Place management and staff arranged for Margaret’s family to greet her at the window.

“I was very humbled by the celebration. 24 of my children, grandchildren and great-grandchildren came. I was on the inside of the glass. They all had their phones, and I had my phone, so I visited with each and every one (via phone conversations),” she told SooToday.

“My great-grandchild (from Toronto) is three and asked his father ‘Daddy, can Grandma Margaret come and live with us? 100 is the end of the numbers, there are no numbers after 100 and she’ll be a baby and start all over again.’"

“His father said ‘we’ll just have to ask Grandma Margaret,’” she recalled with a chuckle.

Margaret began the Sault-based portion of her nursing career in the mid-1960s as a registered nurse at the General Hospital, adding she moved to the Sault when the ‘P-Patch’ neighbourhood was newly built.

“I was six months in obstetrics and then I moved into nursing administration.”

She became Assistant Director of Nursing, Margaret noting the change in titles over the years.

The Director of Nursing in the 1960s, for example, would today be referred to as the Vice President Clinical Operations & Chief Nursing Executive at the new Sault Area Hospital (SAH).

“I think there were many opportunities to try new things and fortunately I was in a position where I was trusted, so I took that position.”

Margaret was also the first female Sault College board of governors chair.

“I was invited to join the board because of my involvement in the hospital at that time. I was at a board meeting and the then-president said ‘there’s a big dinner coming.’ There was always a dinner once a month for the board at the college and they really treated us very well, and the president said ‘you know your wives are all welcome (to attend the dinner).’”

“Being the only female at the board table I put my hand up and said ‘I’m sorry, I have a problem. I don’t have a wife. From then on it became ‘your spouse.’”

To this day, Margaret has a nativity set on her retirement home coffee table, the item made by a member of the Sault College woodworking department.

“I was always involved in the community because the community, after all, is where the hospital is (Margaret also having been involved in committees at the former Plummer Hospital and Lake Superior State University, or LSSU).”

Of nursing in the Sault, Margaret said “there were good days and bad days, but it was great...I still hear from the former staff from the old Sault General Hospital. They haven’t forgotten me.”

“To say she was vibrant, forward thinking in her professional role is an understatement,” wrote Penny Gardiner, one of Margaret’s former workmates and Sault area resident, in an email.

“It was very basic. The patient was the reason for all of our being in hospital work. Every department, be it housekeeping, dietary, nursing or whatever, were equally important because one could not function without the other.”

“I had the advantage of becoming bilingual,” she said.

Trained as a nurse in Montreal, Margaret joined the Royal Canadian Army Medical Corps in the Second World War.

“I was taking care of the results of terrible, terrible war injuries to a lot of very young men (women not involved in combat roles in those days). Some of them were underage, lied about their age to get into the ‘excitement’ of war, perhaps.”

There, she met and married her husband Norman Dobie, who was serving in the Royal Canadian Corps of Signals (responsible for land communication and signalling).

He was wounded in Belgium, but recovered from his injuries.

Regulations prohibited married women in the army from serving near the battlefields of war torn Europe.

Nevertheless, she saw the injuries suffered by Canadian troops sent back to England from the continent.

“It was terrible. I can remember some of the young folks, and they came from all over the country. Saskatchewan, the Maritimes, I remember them very well.”

Margaret and husband Norman returned to Canada after the war and settled in Toronto, Norman working for Bell Canada. He was later transferred to Sudbury, then the Sault, Margaret and children following.

As her children grew into adults and settled in various places throughout the country, Margaret moved to Central Place Retirement Community in Owen Sound to be near one of her daughters.

Margaret was straight to the point when asked who or what she credited for her reaching 100 years of age.

“I think it’s very clear. I think it’s my faith, my family, my friends, excellent medical care and the caring staff here at Central Place.”

“I’ve been blessed with a very, very devoted family. They all call me every day no matter where they are.”

Describing herself as having “a glass half full, not half empty” outlook on life, Margaret said “if I am upset about something that perhaps may not be to my liking, then I stop and think of all the blessings I have every day, and my excellent medical care is very much a part of that.”

As for her faith, Margaret said “I don't believe in coincidence. I believe in divine intervention and this has guided me all my life, as well as my family.”