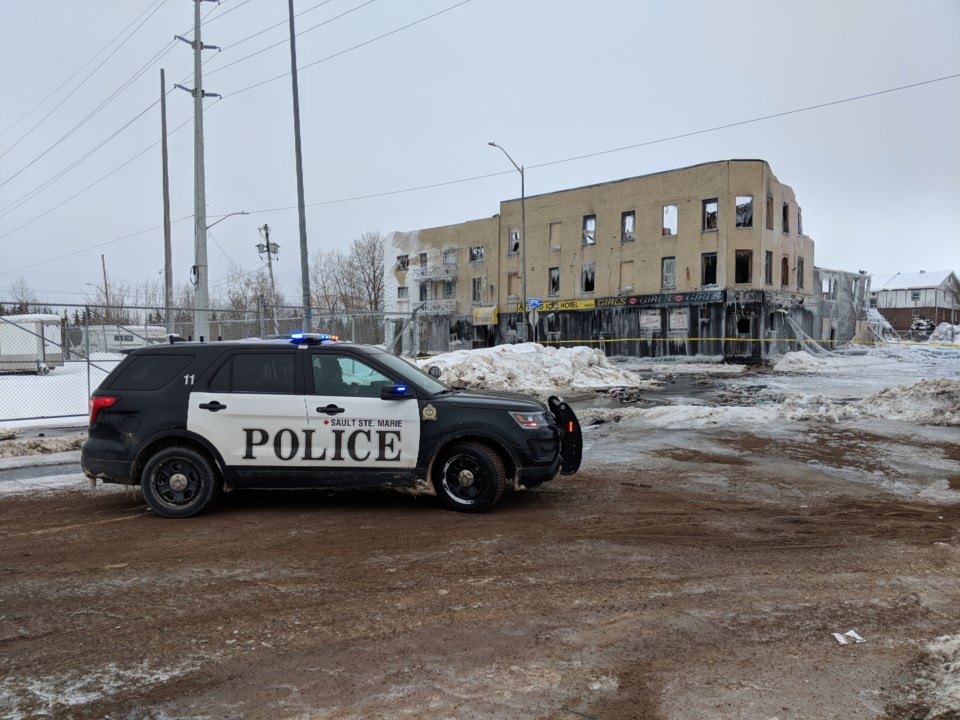 A Sault Police Services vehicle on scene at the charred remains of a nightclub at 89 Hudson St., Feb. 12, 2019. Darren Taylor/SooToday

Sault Police remain at the scene after a fire destroyed The Dime Nightclub (formerly known as Studio 10) at 89 Hudson St. Monday.

“They’re still trying to put it out...the fire’s burning right now. The Ontario Fire Marshal won’t be in to even take a look at it until tomorrow morning (to determine the cause of the fire). They’re going to wait until after the autopsy of the deceased today and then the Fire Marshal’s going to go in tomorrow,” said Sault Police Staff Sergeant Chris Chiappetta, speaking to SooToday Tuesday morning.

As a result of Monday’s blaze, one person, a 60-year-old male, was taken to hospital and died from injuries suffered in the fire.

That figure, Johnson said, combines firefighters at the scene of the Hudson Street fire as well as other firefighters staffed at fire halls ready to respond to other calls across the city.

“On scene we had three pumpers, two aerial trucks, a rescue truck and a command unit vehicle,” Johnson said, adding “it was a difficult fire to suppress.”

“The design of that structure was very compartmentalized. The fire spread into the attic and it had a rapid fire spread because of that, so that made it difficult for the firefighters and their tactics to suppress the fire.”

“Once we determined it was unsafe for our firefighters to be inside we had to pull the firefighters back out and go into a defensive mode because of the fire spread and the amount of water we were applying...it wasn’t safe to be inside any more. When the roof collapsed, it was a tar roof, so the tar added more difficulty to suppress the fire as well,” Johnson said.

No special equipment was used to fight the blaze.

“It was good old grunt work and water,” Johnson said, adding “we offer our condolences to the family (of the deceased man).”

Johnson said no injuries to firefighters have been reported.

The fire was called in late Sunday night and not considered extinguished until early this morning (though reports of smoldering remains continue), a stretch of approximately 30 hours, Johnson said.

The Hudson Street fire came after a massive blaze which consumed several business in the 200 block of Queen Street East Jan. 31.

While loss of life and preventing loss of life is, of course, the most serious matter to consider, Johnson said “there is an overtime cost for Fire Services and we’ll keep an eye on that and monitor it throughout the course of the year. I don’t want to look at two single events that would increase our overtime costs, I have to look at it from a budgetary, calendar year perspective and see what it does to the budget by the end of the year.”

Sault Fire Services did not have to call in aid for Monday’s fire from fire services in Prince Township, Aweres or Echo Bay, Johnson said.

Johnson, however, emphasized “a lot of people help make our efforts and make it work…(including) Police Services, EMS, Transit, Board of Works, PUC and Red Cross. All those groups in this community work with us and we work with them when things like this happen, and we all work together in a unified front. It’s a group effort.”