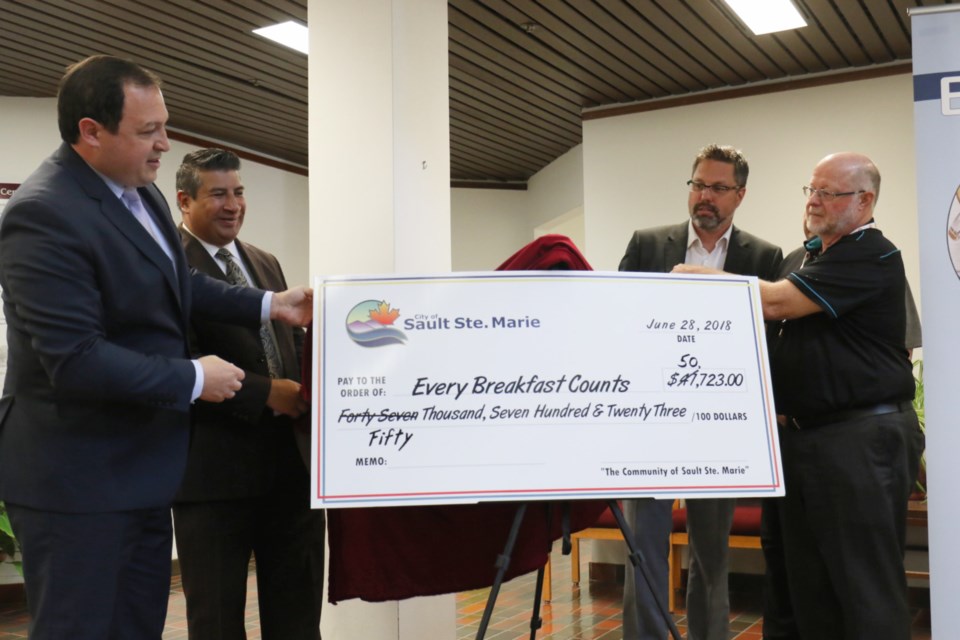 Members of the mayor's office, Algoma Family Services, Sault ste. Marie District Social Services and the local United Way were on hand to announce a total of $50, 723 that was raised during the Every Breakfast Counts fundraising campaign. James Hopkin/SooToday

The Every Breakfast Counts campaign far exceeded its expectations, raising more than $50,000 - far surpassing the $25,000 target it had set earlier this month.

Members of the mayor’s office and and its community partners - Algoma Family Services, Sault Ste. Marie District Social Services and the United Way - were on hand at city hall Thursday to make the announcement.

“It’s an amazing outcome,” said District of Sault Ste. Marie Social Services Administration Board CAO Mike Nadeau. “When the mayor told us the number this morning of what we had raised, it had far exceeded our expectations.”

“We’re so proud of the community.”

Every Breakfast Counts will see meals distributed to local children in need through ‘Kids Being Kids,’ a neighbourhood summer program that’s administered by social services, and the student nutrition program administered by Algoma Family Services.

All of the funds raised will go towards the purchase of healthy breakfast options.

“Every dollar raised is going to buy food for children, so none of the agencies standing behind me and with me, or the city, are taking or recovering any of their administrative costs to deliver this program,” Mayor Christian Provenzano told the crowd gathered for the announcement.

Now that the Every Breakfast Counts campaign has far exceeded its goal, Nadeau says that the money raised should be enough to provide about 200 to 300 breakfast meals across the city daily for the next two summers.

The Every Breakfast Counts campaign began earlier this month in order to address a service gap in food delivery programs throughout the summer months.

“We’re anticipating this program to run for two years as we start to address some of the longer term needs and develop strategies for people living in this city,” Nadeau said.