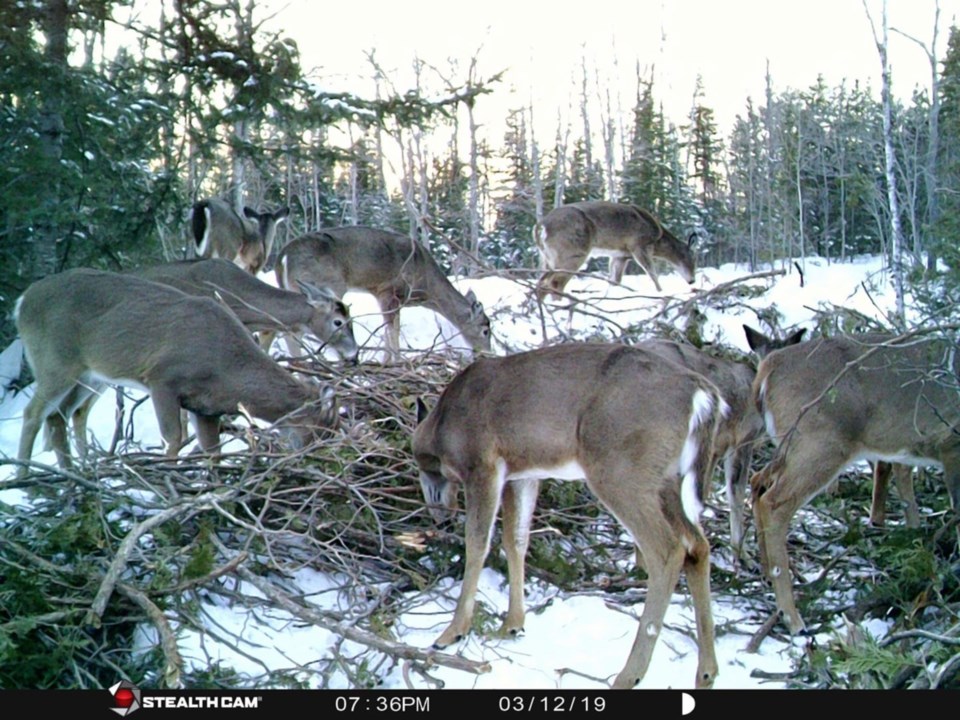 This still taken from a trail camera shows deer eating cedar at a feeding yard in Desbarats. The cedar was provided by volunteers as part of an emergency feeding. Facebook photo

The Algoma Fish and Game Club (AFGC) is carrying out a grassroots, volunteer effort to stave off the potential starvation of deer in the Algoma District following a long winter of excessive snowfall.

The not-for-profit organization approved a $1,000 emergency budget last week in order to feed deer in the Desbarats area, and has launched a GoFundMe page in order to cover the costs of purchasing more feed.

Randy Fawcett, who has been a member of AFGC since 2016, says it’s a critical time for the deer population.

“Our hope is that we can reduce the amount of fawn mortality at birth by another 20, 25 per cent by feeding and getting these does through these last three or four weeks of winter with nutritional feeding,” said Fawcett. “Plus save as many deer as we can from starvation.”

“That’s our goal right now – spot the starvation and have as high a fawning season as we can.”

The AFGC says that the deer population simply can’t get to its regular food supply – which Fawcett says consists mostly of red maple, hazelnut and cedar – and there have been several sightings of malnourished deer around the Debarats feeding area.

The club has a similar feeding yard for deer in the Point Louise area of Sault Ste. Marie.

“We don’t realize with the snow depths and everything [that] it cripples all the animals from being able to move to get to food sources,” he said.

People have also noticed that the deer are gravitating toward white pine, red pine and balsam for food sources, which Fawcett says have no nutritional value for deer.

“We haven’t had this much snow since the ‘70s,” said Fawcett. “The last time that I know the deer were fed in an emergency feeding was 1996, and at that time, MNR [Ministry of Natural Resources] initiated it and provided the feed, but that’s no longer a function.”

Fawcett got the ball rolling on the emergency feeding last week, using the emergency funds released from AFGC to purchase feed and deliver it to people that he knew were already feeding.

Volunteers are also cutting down cedars in an effort to keep deer fed until a shipment of feed is delivered from southern Ontario early next week.

“We’re going around town, we’re cutting down cedar and we’re hauling it down to the Desbarats deer yard, we’re feeding that way,” Fawcett said.

Between AFGC and St. Joseph Island Hunters and Anglers, 600 bags of feed will be shipped to the Algoma District from Rack Stacker, a feed company based in Tweed, Ont. that was started by Steve Elmy, an animal nutritionist with 21 years of experience.

Fawcett says the feed will be provided by the company at “almost cost.”

“It’s a special blend,” Fawcett said. “It’s a wet blend which helps with digestion, so it’s different grains and stuff – there’s molasses in it, and vegetable oil.”

“So it’s a high energy food source that we’re bringing in.”

While the Ontario Federation of Anglers and Hunters (OFAH) have chipped in some funds to help with the $4,000 price tag, the AFGC says that its organization is relying upon the GoFundMe page to cover the costs.

“We certainly appreciate any donations we can get, because we don’t have near the money yet,” Fawcett said.

The AFGC is also looking for donations of cedar and red maple from the public.