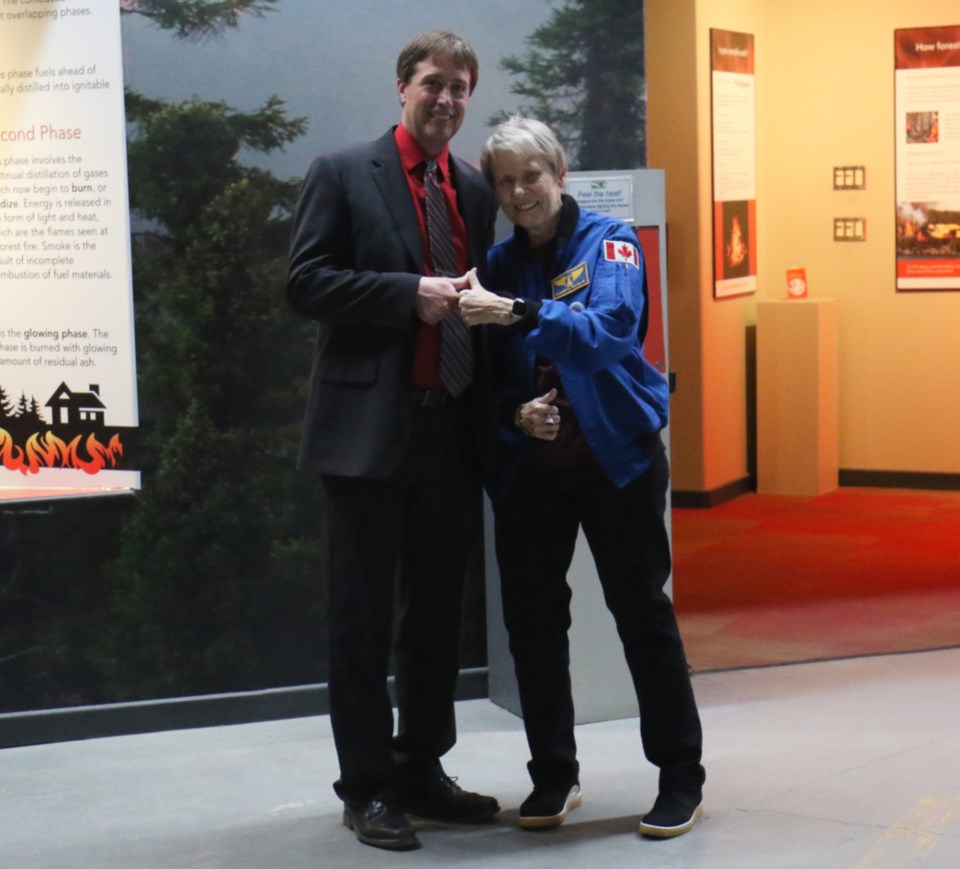 Dr. Roberta Bondar thinks it may be time to place her original blue flight training suit - which has been provided to her via a 99-year lease - in the Canadian Bushplane Heritage Centre.

Bondar returned to Sault Ste. Marie in order to deliver a presentation on space and flight at the Bushplane Museum Wednesday evening, in honour of the centre’s 30th anniversary.

“I’m older, I don’t need to wear the flight suit for credibility - I think you guys know what I do in life, and usually I’m invited to an event because of what I’ve done,” Bondar told reporters at the Bushplane Museum prior to her public speaking engagement. “So I don’t need that kind of thing, but other people need it, and I’d like to see it in own lifetime. I’d like to see people enjoy this stuff.”

“There’s no point sticking it in my home in a basement.”

It’s fitting that Bondar comes home for the 30th anniversary of the Canadian Bushplane Heritage Centre, as it’s the only place that currently houses an exhibit of her space flight artifacts.

“Everything in here is about connecting people to the technology of the world in which we live, and it’s that technology and inspiration that will move people to the next level of their thinking and creativity,” Bondar said.

“She’s in our hall of fame at the front entrance, and she’s been a huge advocate for the museum over the years - advocating for government funding for us, and advocating just about Sault Ste. Marie, and what we have to offer the community and the tourism industry coming to Sault Ste. Marie,” said Dan Igram, executive director of the Canadian Bushplane Heritage Centre. “It’s a tribute for us to be able to honour somebody from Sault Ste. Marie who’s excelled in her field, and it can inspire a new generation to excel in their field.”

During Wednesday night’s presentation, entitled Stars and Flight, Bondar took roughly 400 people in attendance at the Bushplane Museum through the most current thoughts on space travel to Mars and her work with The Roberta Bondar Foundation.

“That’ll bring me back to looking at our own planet, and the kinds of things that we still have that we’re learning from about flight, and that is looking at birds and trying to mimic them in our airplane design,” she said.

Earlier this month, Bondar was promoted to Companion of the Order of Canada during a ceremony at Rideau Hall in Ottawa.

She says that only 165 people in Canada can hold that special designation at any given time.

“It’s very nice to be recognized for my post-space flight activities, and the environment and education,” Bondar said.

The newest Companion of the Order of Canada is currently working on three books - there’s one about the migratory quarters of the whooping crane and the lesser flamingo in the works through her foundation, and she’s even working on a fictional book about a whooping crane aimed toward young adults.

Bondar, who does roughly 10 corporate speaking engagement per year in order to fund her work through her foundation, figures she has about 10 to 12 productive years left before possibly retiring.

“I’m working on three books at the same time, and doing busy things takes me away from the creative headspace,” she said.

Bondar, who wore her blue flight training jacket for Wednesday night’s event, says that bringing her space travel artifacts to the Canadian Bushplane Heritage Centre for exhibit is important to her.

Bondar wants to ultimately inspire people to take their ideas and “move farther into the distance” with them.

“I wanted to have them in the Sault, because when I was a little girl, a little person growing up, my parents would take me down to the library to see books on stars, and I felt that I wanted to give back to the community that was so responsible for me looking at the stars, and trying to reach them in a figurative speech as well as a rhetorical one,” she said. “It is important for me to have things in my hometown, because I feel this community has so much to give to not just Canada, but internationally.”

Ontario confirms 170 new COVID cases today
Jul 9, 2020 11:38 AM
Comments
We welcome your feedback and encourage you to share your thoughts. We ask that you be respectful of others and their points of view, refrain from personal attacks and stay on topic. To learn about our commenting policies and how we moderate, please read our Community Guidelines.