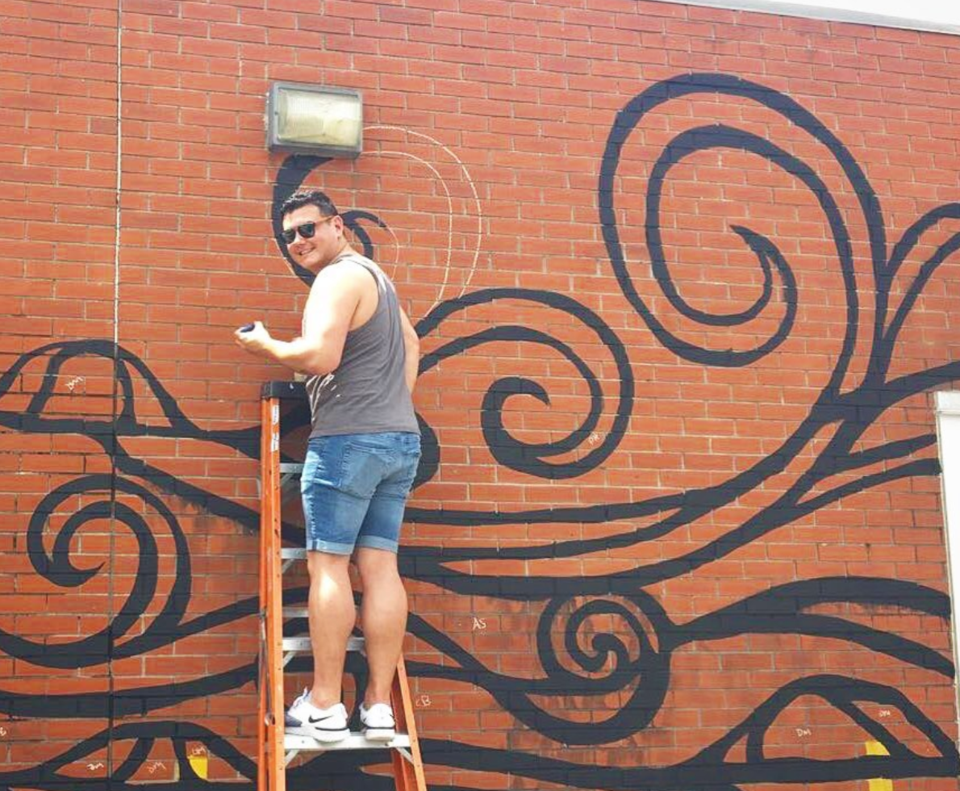 Patrick Hunter works on his mural at 298 Queen Street East. Via Instagram

Ojibwe artist and graphic designer Patrick Hunter is the latest artist to incorporate his art into the downtown core as part of the Downtown Mural Project.

Starting Sunday, he began work on the wall at 298 Queen St. E. The design - his own take on the Woodland style - encompasses a massive tree of life, roaring rapids and a crow shooting out lines of communication (a fitting analogy for the building that will soon house SooToday, an artist sponsor for this mural).

Growing up in Red Lake, Ont., Hunter had always been creative but never imagined he could make a living as an artist.

He was enterprising, however.

“I loved interactions with people,” he remembers. “I had a restaurant for a little while growing up - I went to my friend’s house, took some things out of their fridge, and started selling it. Luckily, my friend’s grandma came over and said; ‘I’ll buy some stuff!’ and she sat down and had some carrots and celery that I was selling that day.”

Red Lake was instrumental in shaping who he is.

“I’m able to connect with people because I had to,” he says. “In a small town, there’s not really a lot of people your age.”

Later, he moved to the Sault to study graphic design at Sault College. It was there he learned the importance of preliminary work.

“If you look at my sketch book, you’d be like; this is a hot mess. How does this translate to that? But the good part of that is, I’m doing rough work. That was what program taught me: plan it out. Don’t just start something and think this is the best art ever.”

It was also during this time at college that Hunter officially came out at the age of 20.

After graduation, Hunter found himself working in kitchens and retail - it was there he picked up the interpersonal and merchandising skills that would later propel his design business. He credits Sean Meades, the director of research at NORDIK, for teaching him how to charge appropriately for his design work.

Then, after a fortuitous introduction (via Grindr) Hunter was able to connect with the Canadian Gay and Lesbian Chamber of Commerce in Toronto, where he now resides at St. Clair and Bathurst.

“Pretty much Muskoka to a lot of gays here,” he laughs. “Like, I’m not going up there!"

In recent years, Hunter’s Woodland style has become more refined and minimalist - and others are taking notice. His clients include RBC, BMO, STAPLES Canada, Rogers and Redwood Classics apparel. He was also selected by eBay Canada to do an apparel collection with proceeds from sales going to Indigenous charities.

Now, Hunter views himself as a role model for young, Queer Indigenous artists.

“There was no one that showed me how to do this,” he says. “If there’s any way I can make it easier for someone coming after me to figure it out, I will share every single thing that I know. As long as you make it your own, and really love doing it, then that’s a career possibility for you. It may not be the easiest job in the world, but it makes for a more fulfilled life. At least I’ll be able to say, I’ve done every single thing I’ve wanted to do.”

He hopes that his mural will inspire people to linger downtown and take more stock in their community. This year, Hunter is happy to celebrate Pride in the Sault.

“The problem with Sault Ste. Marie is that it’s so cynical with itself,” he says. “The whole city is great, and it’s so beautiful. I hope a lot more people want to come and spend time downtown, in the community, outside of their own bubble.

If you want to check out Hunter's mural, there's a midway reveal block party with performers, food and beer happening today from 3-7 p.m. at Bruce and Queen Street East.