Cycling across Canada. In -40°C 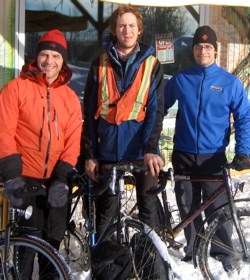 Just when I thought I was the craziest person I know, I get a call last night from a little Frenchman from Québec who is riding his bike from Vancouver to Montréal.

“I just rode 180 km from Munising today and I need a warm shower,” said François Dagenais who contacted me through an organization called warmshowers.com.

I host many cyclists from this organization.

But rarely in January.

François is a very tough 20-year-old student from Montréal.

He decided to take a little bike trip before the winter semester and flew to Vancouver [on] November 27 to ride back home.

So far, he has averaged 120 km/day through some of the worst winter weather.

The coldest day was Saskatchewan with -40°C.

François is promoting human-powered transportation and wanted to prove that it’s possible to ride all year long.

“Back home in Montréal, there are some folks who claim winter cycling is dangerous. I just wanted to make a point,” said François.

So far, no big problems and he expects to be home next Sunday (that’s 800 km in one week!).

He found kindred spirits at Vélorution with Jan Roubal, shop manager, and myself, both avid winter cyclists.

[The photos shows, from left, André, François and Jan.]

For anyone who dares, you can get more information on winter cycling here.

Have a great new year and keep the rubber side down.