After close to three hours of discussion, the same city councillor who chaired the Day Care Review Committee asked council to defer their decision whether to cut 100 city-run daycare spaces entirely, or continue operating them by moving to city schoo
Nov 23, 2015 11:09 PM By: Kenneth Armstrong 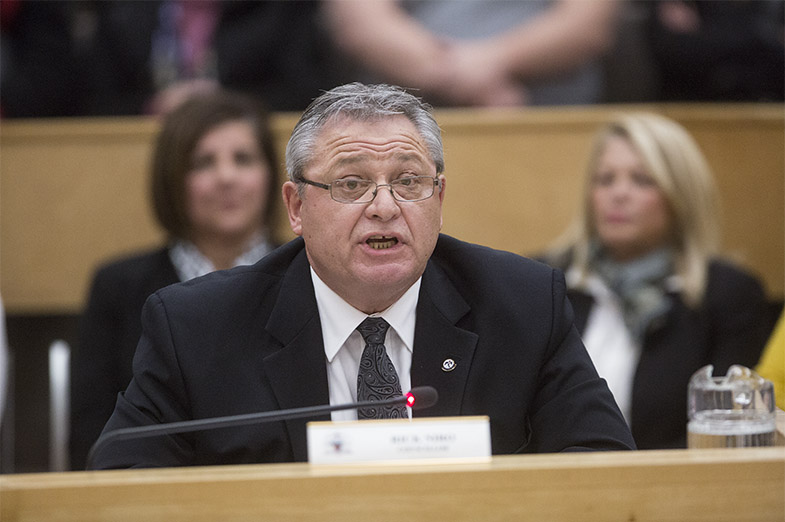 After close to three hours of discussion, the same city councillor who chaired the Day Care Review Committee asked council to defer their decision whether to cut 100 city-run daycare spaces entirely, or continue operating them by moving to city schools.

Rick Niro, who chaired the committee, asked council to defer their decision until the December 7 meeting.

“It’s my belief as the Day Care Review Committee, we really did not have the mandate or authority to put staff to work to look at all those question and answers we had tonight. I think that is council’s responsibility,” said Niro.

Councillor Matthew Shoemaker was categorically opposed to the motion to defer the decision — which had been moved by Niro, who chairs the committee — and he wondered why the report was tabled in the first place.

“They have brought it back, the information is before us. We have asked all of our questions, we’ve got everybody here. I don’t see how deferring this for two weeks so we can get the questions that we had answers to tonight — in writing. We got them tonight, we have video recording of it. Everyone knows what the answers are, they are not going to change in the next two weeks,” said Shoemaker.

He also felt it was hypocritical to defer the motion in light of council’s not approving a deferral to allow the firefighter union to respond to a motion to cut the service by 20 members.

“So to give a deferral tonight — it’s painful to say— but we were asked to defer that difficult decision and we didn’t do that. If we defer this tonight what are we saying to them? We didn’t want to hear from you guys.”

The viewing gallery overflowed with city-run daycare staff, as well as parents and their young children in support of the city-run service.

The report was tabled by the Community Services Department which — along with the Day Care Review Committee — recommended five options for the city to transition.

Many in the gallery were in favour of moving the operation of city-run daycares to schools, which was option number 5.

Rachel Punch — who served as a parent representative on the committee — said daycare staff had a hard time coming up with any cons for that option.

“I think it's a great option. It has the potential to be revenue-neutral, while at the same time it preserves a very valuable service in our community,” said Punch.

Had the motion passed, the 100 daycare spaces the city currently operate — of the 1,468 overall spaces in the city — would transfer to the schools.

Councillors asked questions of the commissioners of various city departments, including the city’s legal department.

In answer to councillor questions, Community Childcare Manager Carly Fairbrother said there were 503 children currently on the city’s waitlist for daycare, which includes city-run and other licensed childcare providers.

Wait times to be accepted to either of the two city-run daycares were between 153 and 290 days.

Of those 503 on the waiting list, 214 are waiting for infant spaces.

Currently the city only allocates three spaces to infant care.

The city would save an estimated $350,000 a year if the city were to pull out of providing daycare service altogether, said Shelly Schell, commissioner of finance.

Adopting option number 5 — moving the operation to the schools — would save the city about $30,000 a year.

Mayor Christian Provenzano asked Nadeau, as commissioner of social services and the chair of the DSSAB, how many daycare spaces the DSSAB could create if they didn’t have to help fund the city’s spaces.

Nadeau responded that up to 120 spaces could be created with the funding.

“That’s a point I am struggling with, because we do have a waiting list problem. It seems to me the money in your hands creates more spaces in the community than it does in our hands,” said Provenzano.

The Ministry of Education changed the funding formula for childcare that resulted in a reduction of over $885,000 in direct childcare program funding for the community.

Those changes went into effect January 1, 2013 and transitional funding was wound down over for 2014 and 2015.

In a report to council presented in May of 2014 by then-CAO Joe Fratesi, it was noted the taxpayers of the city subsidize the daycare through the District of Sault Ste. Marie Social Services Board (DSSAB) as well as covering the operating losses of the Jessie Irving and Maycourt centres, as well as the Best Start Hub.

Of the 100 spaces the city offers, 51 are subsidized. The city-run daycares have been running at 70 percent capacity this year, as new children were not accepted in recent months due to uncertainty about the program.

Were the city to begin transferring its daycare operation to schools, Nadeau said 26 spots would be available ‘immediately’ at Isabelle Fletcher Public School.

An additional 49 spaces will be made available at the former St. Basil Secondary School site, but not until 2017.

But there is no guarantee at this point the school boards would accept the city’s bid to operate daycare centres at those sites.