The group says it is having a difficult time shaking the anti-immigrant label it has been stuck with in Europe. Local members had no trouble finding used needles in this city's back alleys last night

Jeff Klassen
Sep 15, 2016 10:00 AM
Previous Next
1 / 1 The controversial group Soldiers of Odin are now walking the streets and alleys of Sault Ste. Marie. On Wednesday they were out cleaning up discarded drug needles off the streets while wearing their notorious black uniforms emblazoned with the groups logo. Jeff Klassen/SooToday
Expand
Previous Next

While questions linger about the Canadian wing of the controversial organization Soldiers of Odin, a chapter is now active and walking the streets of Sault Ste. Marie.

Representatives of the local chapter of Soldiers of Odin (SOO) said they have been operating in the Sault since April but have been keeping a low profile until recently.

On Thursday, in their first significant public appearance, six local SOO members went out in logo-adorned black uniforms to pick up needles in the downtown alleyways between Bruce and Gore Street.

In other parts of the world, the group’s penchant for street patrols has raised red flags for the Anti-Defamation League, a U.S.-based group that fights anti-semitism, and other forms of racism and bigotry. ADL has labeled Soldiers of Odin a group of ‘anti-refugee vigilantes’ who target Muslims and in a report released in the spring warned of its members' links to the white supremacy and militia movements in the U.S.

One of the group's Finnish founders, Mika Ranta, is widely reported to have neo-Nazi links, and has a criminal record for racially motivated violence.

The local division insists they are only doing cleanup walks locally and don't like the term ‘street patrol’. 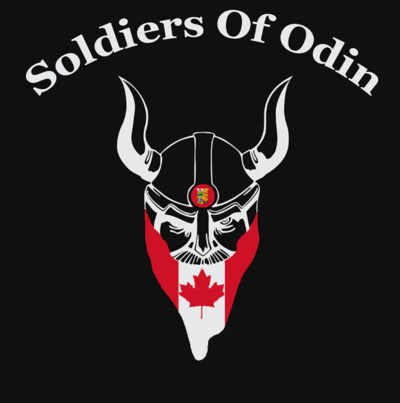 'Odin's Head,' the logo used by Soldiers of Odin Canada. Soldiers of Odin is a controversial street patrol organization that says it is out to help the community, although critics point to the anti-immigrant stance of the group's European wing.Image Supplied

“We’re scared of people thinking we’re a bunch of thugs. Today we wanted to go out in the daylight because if people see us walking around in all our black shirts at night they might get the wrong idea,” said Algoma Division President Claude Torma in an interview on Thursday. “We’re walking a very fine line right now and if we make one little move that looks wrong everyone is going to be calling us racists and thugs right away but really we’re not. We’re not vigilantes. We’re not doing patrols.”

Torma did say they plan to provide late night security escorts for a social worker whose job requires her to walk alleys and streets in bad parts of town after midnight.

Besides the needle walk, Torma said SOO Algoma has collected donated food, toiletries, and other items for The Soup Kitchen and St. Vincent Place Men’s Shelter.

Most of the collection is done via social media but they said there are Soldiers of Odin-labelled food donation boxes at local bars around town.

Torma said they currently have 11 members and are looking to recruit others.

The local group meets once a month for mandatory meetings and at least every two weeks for 'family barbecues'.

Torma said he was recently promoted to president of the Northern Ontario Chapter of Soldiers of Odin which now means all SOO from Barrie to the Manitoba border and up to Hudson Bay preside under Sault Ste. Marie leadership.

Soldiers of Odin started in Finland last year with street patrols aimed at recent immigrants. It has quickly spread to countries in Europe and North America.

The group has seen its share of controversy on both sides of the Atlantic.

SOO Canadian National President Joel Angott insists the Canadian wing of the group is not racist or anti-Muslim. People are confusing SOO’s stance on extremist Islam with racism, he says.

Angott said that SOO Canada is inclusive of different races and cultures and, specifically, has First Nations, Sikh and Muslim members while the Algoma division said its group includes an immigrant from Trinidad, two people who identify as Anishinabek, and an Arabic-speaking first-generation Canadian of Lebanese descent.

“I am not a racist and when you call me this it cuts me to the core. We’re not against Islam. We’re against the extremists and Sharia law. That’s where (people calling us) racist comes in. We don’t want Sharia law implemented in Canada. That’s one thing that we will stand up against and not agree with,” said Angott, who is based in Winnipeg.

“Being called racists all the time is weighing down on some of us. I don’t understand why people want to insist on calling us that when what we’re really doing is out collecting food for the poor, picking up needles from the streets, and doing everything we can to help people,” said Torma.

The blog Anti-Racist Canada (ARC) — an anonymous group that says it is concerned by racist movements — has been tracking SOO Canada mostly via social media since at least March of this year.

An ARC representative, who identified themselves only as ‘nos’, questions why public statements by people like Angott decrying racism don’t seem to match with the activity of its members in private and sometimes secret Facebook groups.

When asked about this, Angott told SooToday he had received a Facebook request from a profile with that name but that he did not know who that person was, who Ernst Zündel was, or that holocaust denial “was a thing” and he has since unfriended the account.

Angott said that over the summer Soldiers of Odin purged some of its Canadian members for having racist views, and has deliberately distanced itself from racist groups.

“We’ve slowed down on accepting members until we’ve fully checked them out and fully vetted them. We did have some people with ulterior motives come into our organization. We weren’t as vigilant as we should have been with these types of people. We did some research, back checking on who they are and what they stand for and we have released people that didn’t have the values that our organization carried (because) they were racist,” said Angott.

Soldiers of Odin is known for doing street patrols.

Members go on neighbourhood safety walks dressed in black clothing adorned with the group’s logo, known as ’Odin’s head’ – a white line drawing of the Norse god Odin wearing a horned helmet and a cloth covering his face.

Angott says there is nothing violent about it.

“It’s just us going around to see and address problems like finding places with mobility issues or looking for broken glass at a park,” said Angott. “We don’t condone violence. If we see someone being harmed, we’ll keep our distance and phone somebody. We won’t engage; that’s not what we do. That’s what the police are for.”

“We’re aware that such an organization exists but at this time have nothing to report regarding them in our community,” said Constable Troy Miller of Sault Ste. Marie Police Service.

*************************
Editor's note: Comments on the above article have been disabled due to repeated inappropriate posts. Please read our Terms of Service before commenting on any comment section of SooToday.com.

A magical destination for individuals and families of all ages