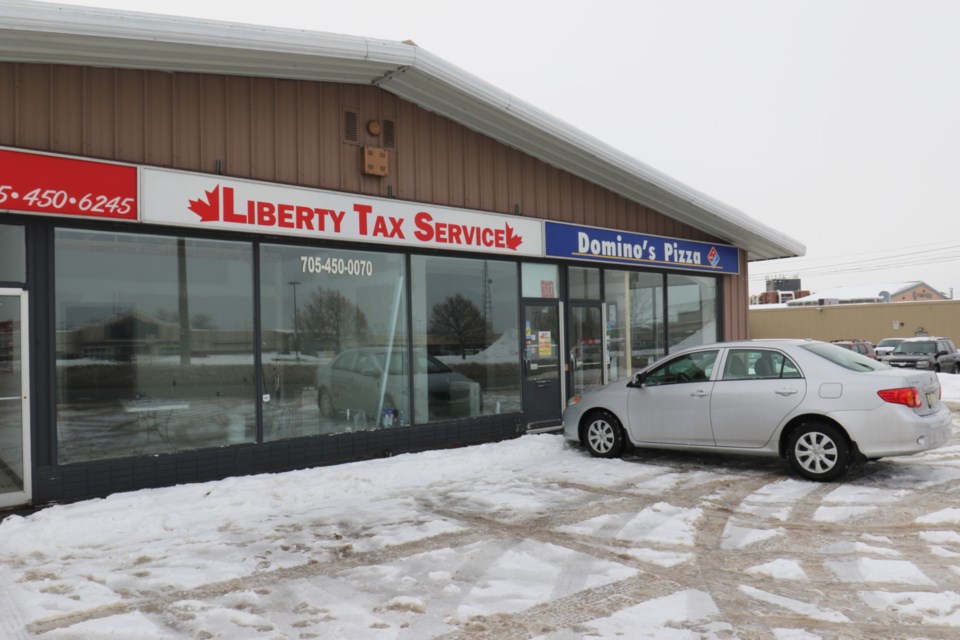 The Alcohol and Gaming Commission of Ontario (AGCO) has confirmed that Hello Cannabis' proposed location for a cannabis retail store at 317 Northern Avenue East has received two submissions regarding the proximity of the location to Soo Pee Wee Arena. James Hopkin/SooToday

Hello Cannabis CEO Stephen Verbeek says that his company’s application for Sault Ste. Marie’s first cannabis retail store should satisfy all requirements laid out by the Alcohol and Gaming Commission of Ontario (AGCO) - even if the proposed location at 317 Northern Avenue East isn’t among the municipality’s preferred locations.

In its comments on Hello Cannabis’ AGCO application during the 15-day public hearing period, the City of Sault Ste. Marie noted that the 71 metres separating the proposed location and Soo Pee Wee Arena doesn’t meet a 150-metre setback requirement outlined by city council as part of its criteria for preferred cannabis store locations.

The city also provided AGCO with a map illustrating its preferred locations within the municipality.

“If the proposed location isn’t meeting those criteria, we would hope the AGCO considers that as part of the licencing process,” White told SooToday. “It would be our view that the location of retail cannabis stores in Sault Ste. Marie meet the criteria that’s desired by council.”

"We were approved by the AGCO for that location"

Verbeek maintains that the Soo Pee Wee Arena is privately owned, and therefore not subject to setback requirements that were approved by city council during a January 2019 council meeting.

“To our knowledge, and what we were told by the city, is that this is a privately owned facility - not a municipally-owned community centre, which would be in breach of both AGCO and municipal bylaws for operating and obtaining licences for a cannabis retail store,” said Verbeek. “We were approved by the AGCO for that location. We had spoken to the city about that location. We were informed that it is indeed privately owned, [and] also a facility that serves alcohol, which falls under very similar rules, regulations and guidelines as cannabis distribution - not entirely though, but similar.”

“We made our say as to why we like that location as opposed to some of the suggested spots that the municipality had suggested. To our knowledge, it was OK. The AGCO clearly believed it was OK, as they have a pretty rigid system and robust system that allows them to be able to ensure that there are no breaches for municipalities or them, and so we applied at that location and we received our public hearing permits 15 days ago, and so far so good.”

The first cannabis retail store to open under the Hello Cannabis banner in Dundas, Ont. received three comments on its AGCO application, which Verbeek says were all ‘non-material’ in nature.

“We are under the impression that we will not receive any complaints that we will not be able to address or make some form of compromise if required, and then we will submit responses to said complaints. The AGCO will review them and hopefully, what we are predicting, they will accept and agree with our rebuttals and our chosen path to essentially address any said concerns and ensure that they don’t come to fruition or cause any detriment to the community,” Verbeek said.

A tale of two sets of criteria

According to the City of Sault Ste. Marie, council has determined that potential cannabis store locations should be properly zoned for retail sales, and be situated at least 150 metres away from schools, parks, community centres and existing treatment centres.

But according to the Cannabis Licence Act, the province only requires a 150-metre buffer from schools - not parks, community centres and treatment centres as outlined by city council.

“I should confirm that our criteria is something that exceeds the minimum criteria provided for by the province, and the province is the licencing authority,” said Chief Administrative Officer Malcolm White. “We’ve provided our comments to the province, but in the end, it’s a provincial decision.”

Verbeek anticipates that Hello Cannabis will open its doors at 317 Northern Ave. E. in March.

It’s expected that construction at the site will wrap up in the coming weeks.

“We hired entirely locals for the store, and are bringing our upper management and our experienced team to train them, and we want this store to represent Sault Ste. Marie - not a faceless corporation,” Verbeek said.

The AGCO has provided Hello Cannabis with written submissions received during the public hearing period, and the company has five calendar days - in this case, until Jan. 28 - to respond to any submissions.

All submissions and responses will be considered by the AGCO registrar before making a decision on retail store authorization.

The AGCO has confirmed that it has received two submissions related to the proximity to Soo Pee Wee Arena.

"The other was a member of the public concerned about the proposed location and proximity to the arena," said AGCO senior communications advisor Raymond Kahnert in an email to SooToday.

The AGCO can't confirm when a decision will be made by the registrar.