With the steel mill seven months out of insolvency protection, City Council moved this week to kick-start the drive for a major commercial port
Jun 19, 2019 8:31 AM By: David Helwig 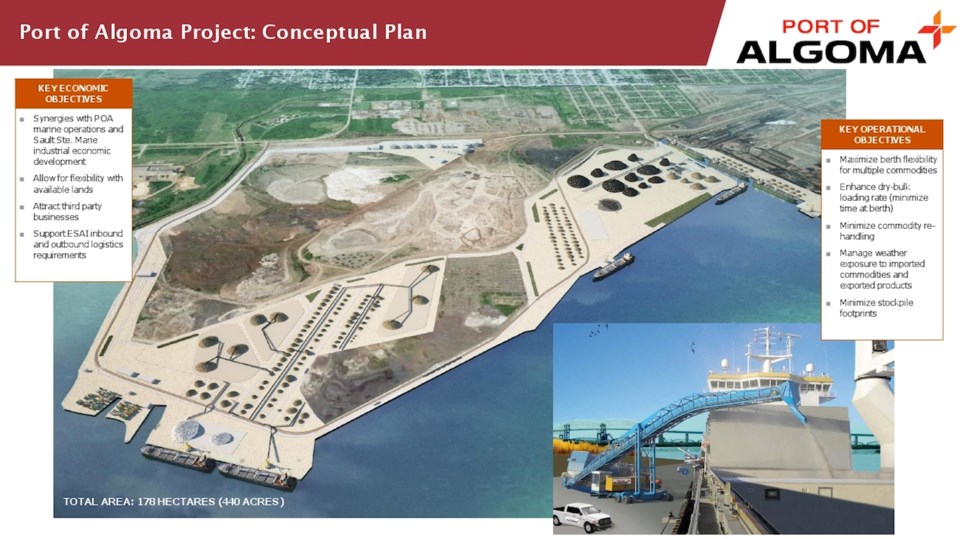 Visions of a thriving commercial port launching the Sault into a new era of economic growth still dance in the heads of Sault Ste. Marie's city councillors.

In May 2014, the Port of Algoma initiative was launched with a total of $5.3 million from federal, provincial and city governments and the local steel mill.

The first phase of what's now referred to as the Algoma Docks project was completed and further work was suspended until the steel mill could emerge from Companies' Creditors Arrangement Act (CCAA) protection.

The Algoma Docks agreement with FedNor and Northern Ontario Heritage Fund Corp. (NOHFC) is due to expire at the end of this month.

So on Monday night, Sault Ste. Marie City Council voted to ask FedNor and NOHFC for an extension.

"This is due to the length of the CCAA proceedings and also, with the new ownership and management structure in place at Algoma Steel, further time is required to determine the path forward for this project," Al Horsman, the city's chief administrative officer, said in a report to Mayor Provenzano and city councillors.

"The city's federal and provincial partners are aware of the lengthy process to conclude the CCAA proceedings and have advised that to ensure that the funding allocated for the project is available for future use, an amendment is required to extend the project completion date," Horsman said.

"We are seeking approval to extend to Dec, 31, 2019. This amendment will allow sufficient time to complete the 'go-forward' plan with the new ownership and management team at Algoma Steel."

Also this week, councillors voted to apply for funding under the province's Audit and Accountability Fund, intended to identify savings of four cents on the dollar.

But City Council rejected a suggestion from CAO Horsman that the audit work be sole-sourced to KPMG LLP, which is currently helping the city develop a municipal reference model.

Giving the job to KPMG was opposed by Ward 3 councillor Matthew Shoemaker, who feels too many city contracts are being sole-sourced and has served notice he'll now be opposing all of them.

"We're not necessarily seeing it as a line-by-line audit, notwithstanding some of the differing opinions expressed in various media outlets." Horsman said.

Ward 2 councillor Luke Dufour and his Ward 5 counterpart Matthew Scott both cited the Sault operations of Workiva, which Dufour said started with one remote worker in 2010 and is now "a growing office of over 20 professionals, remote workers who are living here in Sault Ste. Marie and contributing to our economy."