Memorandum of understanding signed Wednesday with Algoma University
Oct 25, 2018 8:00 AM By: David Helwig 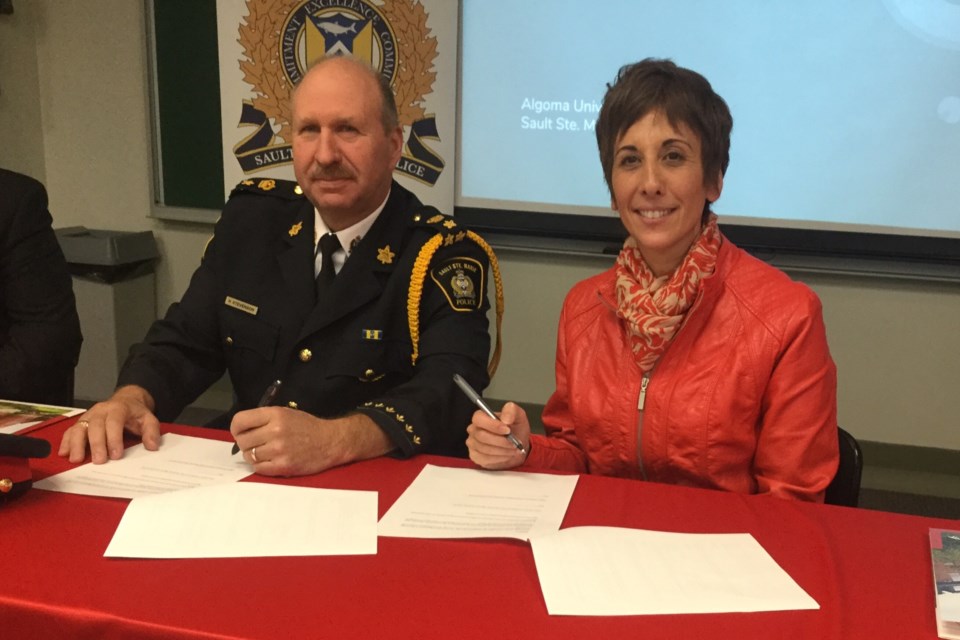 Spearheaded by deputy chief Sean Sparling, the new program is known as SHIFT (Shifting Indigenous Frontline Tactics) and will eventually be provided to all City Police personnel.

It's designed to bridge the gap between police and indigenous communities by encouraging cultural understanding and sensitivity.

"This is for everyone from civilian to chief," Police Chief Hugh Stevenson tells SooToday. "It's not about who you are in the organization or your status. It's about the entire organization being given an opportunity to understand gaps, challenges in the indigenous community, and work together to make sure that everyone feels safe in the Sault police area."

The curriculum will then be fine-tuned with input from the initial class of leaders, after which classes for rank-and-file police staff will start next May.

"For me, it's all about those young recruits...that early on in their career they get exposed to this material," the chief said.

"We're looking a cohort of anywhere from 15 to 20 at a time, depending on scheduling," said Joe Tom Sayers, Algoma University's director of Anishinaabe initiatives.

The program has been developed with input from a committee of local elders and community members.

"We're going involve culture in the delivery of the training. We're going to use our Biidaabin arbour... as well as a firekeeper. That's how we're going to start each day," Sayers told us. "And finally, we want to have a lot of indigenous foods."

"The committee felt that there needs to be a balance between cultural understanding and exposure to cultural practices, with the day-to-day issues that not only police have to face, but indigenous peoples in urban centres," Sayers told us.

Instruction will be provided by Algoma University, both on- and off-campus, using four facilitators.

Both City Police and the university are hoping the innovative program will eventually be made available across Canada.

"We both have agreed that we do not want to engage in this work if it's not going to change something in both organizations," Algoma University president Asima Vezina said at Wednesday's signing event.