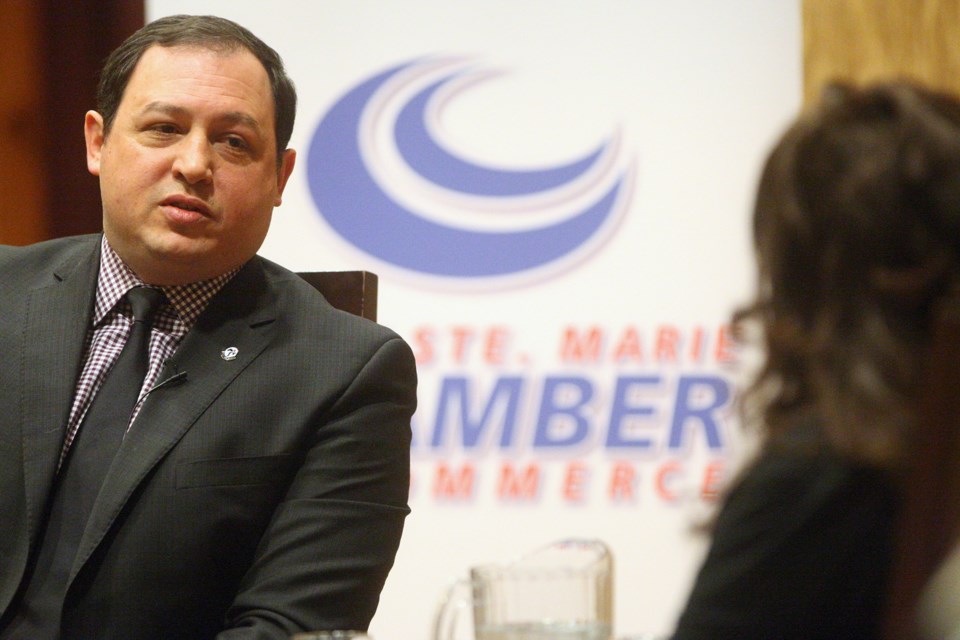 Mayor Christian Provenzano answers questions posed by Monica Dale, Chamber of Commerce President, during a dialogue sponsored by OLG. Titled "Where Are We Now?" the dialogue was held this morning at Algoma's Water Tower Inn. Kenneth Armstrong/SooToday

Speaking primarily to members of the local business community during a Chamber of Commerce question and answer session, Mayor Christian Provenzano says the city needs to take a more direct role in economic development to diversify the local economy.

Chamber President Monica Dale moderated the question and answer session with the mayor during the hour-and-a-half ‘Where Are We Now?’ dialogue, held this morning at Algoma’s Water Tower Inn.

Provenzano cited the high unemployment rate — as a result of layoffs in the local steel industry, including Essar Steel Algoma and Tenaris Algoma Tubes — as reason to diversify.

“If, down the road, something happens to one of our major employers, it has to be one tree in a larger forest, and we can’t lose sight of the forest for the tree,” said Provenzano.

The mayor said the city is in the process of retaining legal counsel for Essar Steel Algoma’s creditor protection proceedings.

“We are going to be getting into that process within the next couple of weeks in a more significant way,” said Provenzano.

Court documents have shown the City of Sault Ste. Marie is owed $14 million by the financially-troubled steelmaker.

The mayor said he is in constant communication with all levels of government, with management at Essar Steel Algoma and Tenaris, as well as the unions who represent the workers in those industries.

Provenzano said, because most taxpayer money is spent on salaries within the 1,100 city staff, one method of finding savings is by looking within.

The mayor cited Fire Chief Mike Figliola’s realignment plan, the result of which is 17 positions added to fire and EMS at a cost of 20 front line firefighter positions, reduced by attrition over three years.

Provenzano said that effort will save the city $1.5-million.

“That wasn’t an easy thing for [Figliola] to do. He’s a firefighter, he’s not an EMS guy. He’s been a firefighter for 30 years. He has taken a real beating on that,” said Provenzano.

He added, “is that the only place in the city where we have more [staff] than we need? I doubt it.”

Aside from human resource costs, the mayor cited the cost of inflation as an ongoing challenge to keeping municipal taxes low.

Some things just cost more — the salt on the road, the asphalt, different things the city is consuming to provide services — cost more, so that increases the budget,” said Provenzano.

Another challenge, said Provenzano, is the shrinking tax base.

If the city budget doesn’t adjust, to some proportional degree, with that shrinkage — then the people who are here will be carrying a larger and larger burden,” said Provenzano.

Looking forward, Provenzano would like to see more money spent on so-called ‘quality of life’ initiatives, in an effort to retain and attract young families to offset the potential of population loss.

“We need more people to stay here and relocate here that are in that demographic — that are young professionals, and will start families, and buy cars and have kids that will go to the Pee Wee and play soccer. We need to have a community that they want to live in,” said Provenzano.

Referring to Sault Ste. Marie as a ‘city of immigrants,’ Provenzano said the city needs to be accepting to new immigrants.

“I think we have to really embrace immigration. The strength of this country is multiculturalism and diversity. I think Sault Ste. Marie can be a leader in that respect,” said Provenzano.

A student from Sault College, who was in attendance for the dialogue, asked what is being done to retain the international students who attend the city’s post-secondary schools.

“I think the answer to that is ‘We don’t have a plan to retain international students.’ As disappointing as that may sound, we’re not doing anything,” admitted Provenzano.

He suggested the two city councillors in attendance — Steve Butland and Lou Turco — take that issue on.

Although Provenzano admitted municipal taxes in Sault Ste. Marie may be higher than some other Northern Ontario communities, he noted many of the other communities charge development fees to businesses building within their respective cities.

He suggested charging development fees could potentially offset the taxes charged to business, though he echoed his past statements, that he is not in support of development fees.

Provenzano said he is proud of the successful reduction of sewer surcharge costs charged by the city, through the PUC.

“Which is money in everybody’s pocket — and every business’s pocket and the industrial pockets — because everybody pays that surcharge for water,” said Provenzano.

He lauded the efforts of the PUC board to provide relief to its customers in addition to the sewer surcharge.

“We forewent the electricity distribution increase, and the water increase from the PUC,” said Provenzano.

He added, “looking at what we are doing there, that helps the businesses, but also helps the residential homeowner.”