'There is a large retailer with blue colours and a yellow sun as their emblem that does not pay an individual in town to go pick up the carts' - Ward 3 Coun. Matthew Shoemaker
Nov 4, 2019 9:37 PM By: David Helwig 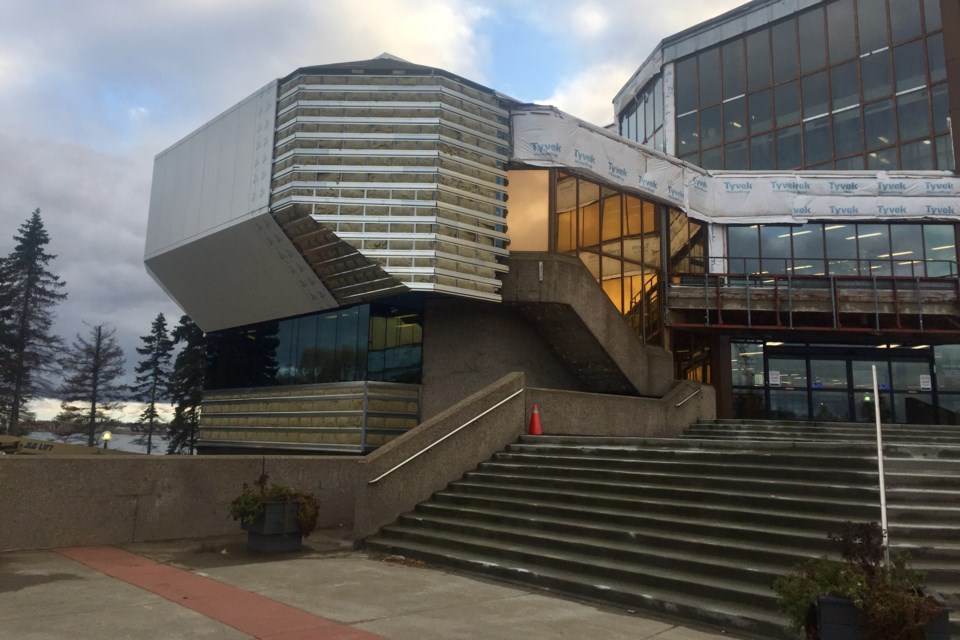 As City Council met inside the Civic Centre on Monday, Nov. 4, the exterior of the council chambers was sporting the first panels of its new white cladding, visible at the left of this photo. David Helwig/SooToday

Walmart saves you money, the warm-and-fuzzy advertisements tell us, endlessly.

One of the ways Walmart does that, Sault Ste. Marie City Council was told tonight, is by not bothering to collect shopping carts that end up off its property, leaving the clean-up job to city workers.

But Shoemaker it made abundantly clear whom he was talking about in his verbal presentation.

"There is a large retailer with blue colours and a yellow sun as their emblem that does not pay an individual in town to go pick up the carts," he said. "Their's are the ones that you see most often around town."

Most local retailers that use shopping carts either collect them themselves or use an independent contractor to pick them up, Shoemaker told the meeting.

"It is for those retailers that refuse... that this will make sure there is a mechanism in place to recover their carts."

Shoemaker described some of the local shopping-cart graveyards.

"It just takes one trip down Pine Street to realize that these things are everywhere. I saw eight of them at the bus stop at Pine and McNabb last week."

"I'm told there are 20 of them at Cara Community housing on Old Garden River Road at the bus stop."

"If you check the pathway from Sault College to Pine Street, there's five or six of them."

If the Ward 3 councillor was trying to avoid naming names, he slipped up later in the meeting when complaining that city works crews were collecting the retailer's wayward carts.

"I don't want my tax dollars going to subsidizing Walmart, and I don't think anybody else who pays taxes wants their taxes subsidizing one of the largest corporations in the world," he said.

"They're having the shopping carts stolen, but frankly the police have bigger issues to deal with than someone taking a shopping cart off the site."

"It's a lot more efficient to have a bylaw in place that says retailers are in charge of managing their shopping carts."

"Kitchener, Guelph, Mississauga, Ottawa, Markham, London and Toronto all have bylaws that state retailers are responsible for collecting their carts."

No retailer is going to pull up roots in the Sault because of a shopping-cart bylaw, Shoemaker insisted.

Ward 2 Coun. Lisa Vezeau-Allen voted in favour of the resolution but pointed out that people with disabilities or economic disadvantages use shopping carts as a means to carry food to their residences.

She urged City Council to also look at the broader issue of helping people to procure food safely.

Currently, veterans are allowed two hours of free parking throughout the year.

"It's just a way of ensuring no one is getting a ticket for being at a Remembrance Day celebration," Coun. Shoemaker said.

In other news, councillors voted unanimously to look for ways to recognize former Sault mayor, MP and diplomat Ronald A. Irwin.

Shaw Spotlight and SooToday were unable to provide live video from tonight's City Council meeting because a critical piece of Shaw equipment failed.