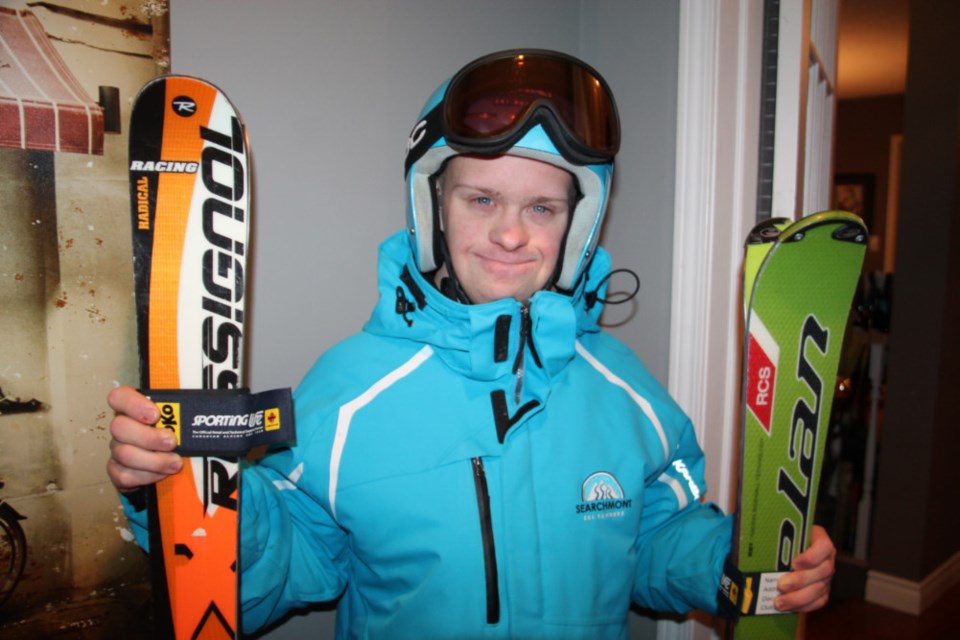 The Sault’s Carter Simpson, the lone alpine skier among the 12 local athletes getting ready to compete in the 2019 Special Olympics Ontario Provincial Winter Games, is pictured here, ready to go, Nov. 27, 2018. Darren Taylor/SooToday

Carter is the lone alpine skier among the 12 local athletes getting ready to compete in the 2019 Special Olympics Ontario Provincial Winter Games, to be held in the Sault and area Jan. 31 to Feb. 3, 2019.

“It’s fun. I like to go fast, I like the speed and I like to train hard,” said Carter, who works out at the gym daily with his mother (local chiropractor Dr. Ann Liz Simpson), skiing at Searchmont every weekend once ski season begins.

Carter has skied recreationally in BC and in competitions in other northern Ontario communities.

Those competitions include the 2011 Special Olympics Ontario Provincial Winter Games in Thunder Bay, where he won a silver medal, and at a 2017 competition in Collingwood, where he won gold.

“He grabbed his skis and kissed his skis on the podium,” Ann Liz said as mother and son spoke to SooToday.

An Elvis fan, his favourite songs include ‘Jailhouse Rock’ and ‘Suspicious Minds.’

Carter started alpine skiing when he was five-years-old.

“I’m an ex-ski racer so I knew it was something I wanted my family to get into. As soon as my children could walk in ski boots, all three of them were on the hill, and our yearly vacation is out west to ski.”

As the 2019 Games approach, Carter said he’s looking forward to meeting and hanging out with other athletes from other parts of Ontario.

“It’s serious competition, but the athletes are all very considerate and helpful. If somebody falls, they’ll stop racing and help,” Ann Liz said.