'After almost a decade of financial struggles riddled with losses, the chamber fully expects to show a profit this year' - Sault Ste. Marie Chamber of Commerce treasurer Michael Stone
Oct 9, 2019 9:39 AM By: David Helwig 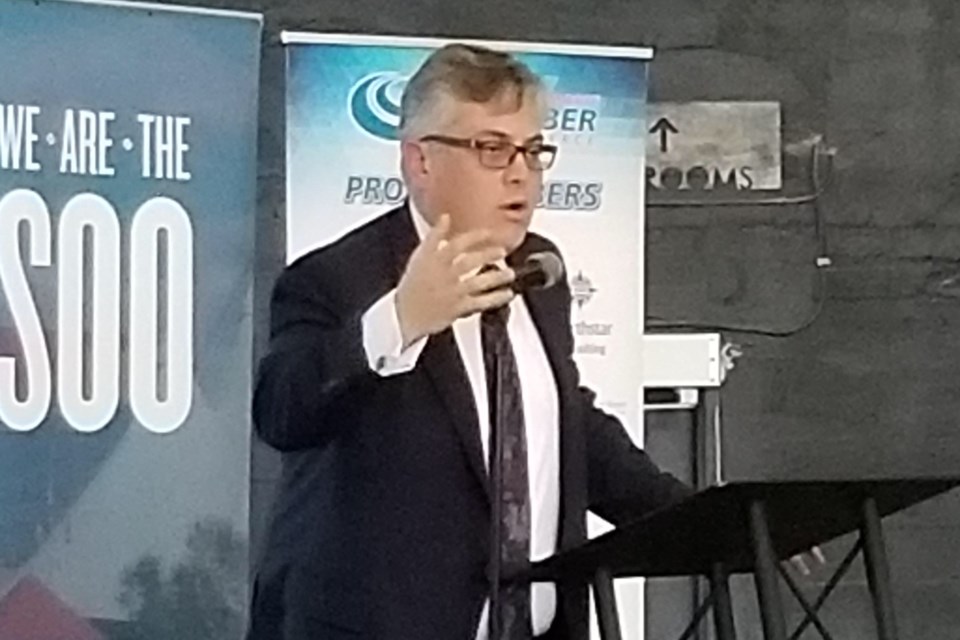 "I am extremely happy to present to you today the news that the Chamber of Commerce has hit a turning point in its financial outlook," treasurer Michael Stone told the organization's 130th annual general meeting at the Machine Shop.

"After almost a decade of financial struggles riddled with losses, the chamber fully expects to show a profit this year, a profit ahead of budget," Stone said.

Audited financial statements weren't available at the meeting, but Stone said he was confident "the colour of the ink on our bottom line this year will be black."

"As many of you in the crowd today can attest to, turning around a business from financial loss is not something that is easily done. It often takes years to correct and change."

"The chamber had to make some incredibly difficult decisions the past two years regarding the staffing levels, what jobs should remain inside the chamber and which tasks would be more cost-effectively outsourced outside the chamber's employees. These were not easy decisions, but they were necessary," Stone said.

"It's a common thing around the business world. We'll always be asked to do more with less. The chamber is no different."

As SooToday reported in May of 2018, the organization's staff was slashed at one point to just two full-timers: chief executive officer Rory Ring and Bob Burns, membership and business development leader.

"In particular, the last three years have proven to test our mettle and resolve," said Ring.

Outgoing president Don Mitchell added:  "This year was a year of restructuring, with staff assuming new responsibilities and with our board of directors assuming a more active role. Having served the Sault Ste. Marie business community for the past 130 years, your chamber has proven its resiliency and ability to adapt many times over and did so again this year."

The Sault's bastion of business has traditionally survived on membership fees and special events like its annual business awards, a sport/outdoor show and a home/renovation expo.

Ring said last year that membership was down and events weren't as profitable as they used to be.

Facing challenges including the steel mill's insolvency, the threat of crushing steel tariffs, high electricity costs and Ontario's minimum-wage controversy, the Sault chamber had immersed itself in advocacy work, activity that doesn't pay any bills.

"We've had to hit the pause button and seek some relief to get us to our fiscal year-end," Ring told SooToday at the time.

In its most recent strategic plan, the chamber committed to a 10 per cent Increase in total revenue year over year, with net positive cash flow year over year.

Membership is expected to grow by 10 per cent annually and avoidable membership cancellations are to be reduced by five members a year.

This year, the chamber did better than expected on its awards gala.

The sport/outdoor show was replaced by a health/wellness expo with new event formats that eliminated almost all fixed costs previously charged to the chamber.

More money was saved by farming out bookkeeping and accounting work previously done by chamber staff.

"Our financial priority is rebuilding our cash reserves, creating a strong balance sheet which will allow us to weather any storms that may arise," treasurer Stone said.

Carlo Spadafora, the incoming president, is a lawyer with Laidlaw Paciocco Dumanski Spadafora & Johnson LLP and a girls soccer coach whose late wife Erica Cadieux is honoured each year with a memorial soccer match at Montreal's Concordia University.

Spadafora hopes to get back to business advocacy, meeting more regularly with Mayor Provenzano, city councillors, MPP Ross Romano and whoever is elected MP in the current federal election.

"Notwithstanding the many assurances that one gets, you never really know what gets delivered to you when you step in," he says. "No matter what you prepare for, there's always a curve ball that gets thrown your way."

The following is the full list of Sault Ste. Marie Chamber of Commerce board of directors acclaimed for 2019-2020:

Beatty cited the approval process for Noront's proposed ferrochrome processing facility as an example of overregulation that he said is stalling community-building and nation-building projects.