Caitlin steps up to help Dad, Algoma Veterans with makeup sessions and barbecue 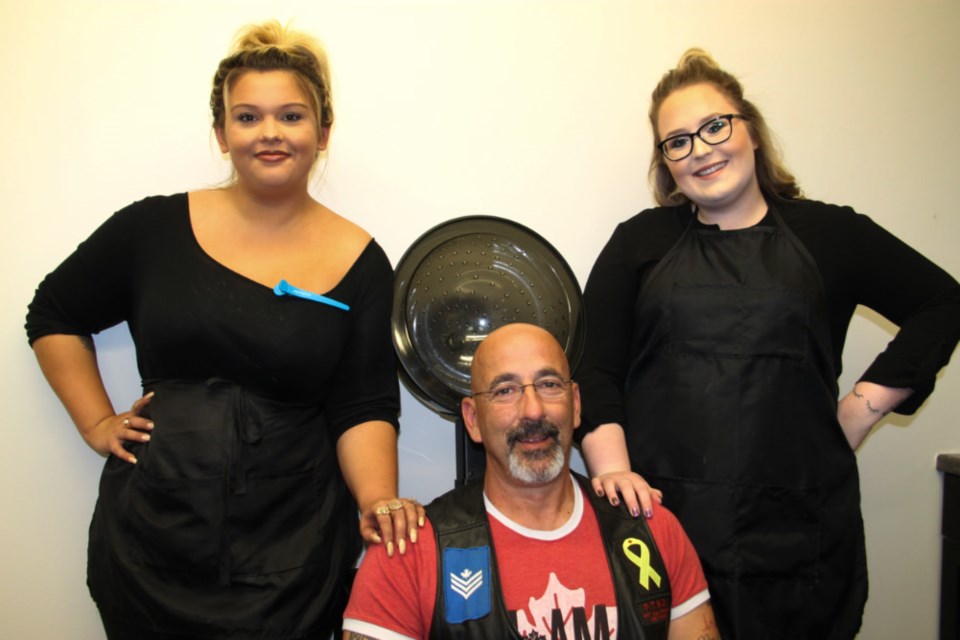 A young Sault entrepreneur will be doing her part to help the next generation of Canadian veterans Monday.

Caitlin Peel, BeYOUtiful Esthetics licensed esthetician and certified lash technician, will be holding a fundraiser Monday, Sept. 10 at Lavish Salon, located at 807 Queen St. E., to raise funds for the Algoma Veterans Association, of which her stepfather Frank Iezzi is president.

Caitlin will be on hand for waxing, eyebrow shaping, eyebrow and eyelash tinting between 11 a.m. and 8 p.m.

“Those services are quick, so then we can get more people in on Monday. Other services like eyelash extensions would take longer. I want to provide services that take about five or 10 minutes,” Caitlin told SooToday.

Her stepfather Frank, a Sault native, served with the Royal Canadian Air Force (RCAF) from 1987 to 2008, including a six-month posting in Afghanistan in 2002.

“I feel it touches me on a personal level. I see how my Dad’s been affected (by experiences only a veteran knows), and I feel there’s not enough awareness out there, people have no idea what the veterans have done for us,” Caitlin said.

“A lot of them go through PTSD and depression and have suicidal thoughts. We have Remembrance Day, that one day out of the year where people are thankful, and every other day of the year you don’t hear enough about it.”

Olivia Braido, Lavish Salon owner and hairstylist, meanwhile, will be barbecuing outside the salon between 5 p.m. and 8 p.m. Monday.

“I have family who have served in the military and a cousin who’s currently serving. It’s close to home for me, like Caitlin. With the profession we’re in and the platform we have, we have hundreds of clients put together, so we want it to be good,” Olivia said.

All proceeds from Monday’s esthetic services and barbecue will go to the Algoma Veterans Association.

Glancing at Olivia, Caitlin said “as young entrepreneurs in the community, we want more community involvement and donating, so we’re hoping events like this will get more awareness out.”

“There are the older veterans who are taken care of in homes but there are the veterans like myself, and probably another one, two or three hundred in the Algoma district...people don’t know about us. We went to Afghanistan on a peacekeeping mission and it turned out to be a war, and we lost over 150, plus those with injuries, and those with (unseen injuries such as) PTSD,” Frank said.

“I’ve had depression, anxiety, a wide range of physical injuries from the military...just every day, trying to get out of bed and get going (is sometimes difficult),” Frank said.

Frank’s vision, and that of the Algoma Veterans Association, is to establish a getaway for modern day veterans, to be known as the Superior Ridge Retreat, through raising funds to buy an existing cottage or build new on a parcel of land.

“It’s going to be, basically, a place for veterans to come out and relax, grow a garden, go fishing, maybe do some yoga out there, and hopefully down the road bring psychiatrists and psychologists there,” Frank said.

“We want it to be wherever we can find some cottages and some water. At Gordon Lake there are several cottages, the land is there, the water is there. Until we raise enough money to purchase a place, it’s dependent on fundraisers.”

“I hope the community sees what these young women are doing for us. It’s a big step. I’m very proud of both of them. I hope more of them, more businesses, will come out and do the same thing. It will really help the veterans in our community, those who are not elderly, they’re younger. We’ve got to remember that,” Frank said.

No appointment is necessary for Monday’s fundraiser at Lavish Salon, Caitlin said, but those wishing to make an appointment or needing more information may contact her at (705) 987-4423 or through the BeYOUtiful Esthetics Facebook page.

The Algoma Veterans Association may be reached through the group’s Facebook page.

More information on the group is also available at its website which also contains a link to its GoFundMe site to help establish the Superior Ridge Retreat.

City sweetens pot on miscellaneous road work. Will your street get done?
May 28, 2020 10:32 PM
Comments
We welcome your feedback and encourage you to share your thoughts. We ask that you be respectful of others and their points of view, refrain from personal attacks and stay on topic. To learn about our commenting policies and how we moderate, please read our Community Guidelines.