Appeal against Goulais Wind Farm to be heard

In its ongoing campaign against establishment of Wind Farms in Algoma, the group known as Save Ontario’s Algoma Region (SOAR) has announced that an appeal, filed by Heyden resident Doug Moseley against the Ontario Ministry of the Environment 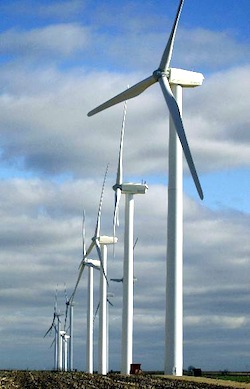 In its ongoing campaign against establishment of Wind Farms in Algoma, the group known as Save Ontario’s Algoma Region (SOAR) has announced that an appeal, filed by Heyden resident Doug Moseley against the Ontario Ministry of the Environment's (MOE) October 4, 2013 approval of the Goulais Wind Project, will be heard later this month.

A news release from SOAR, issued Tuesday October 22, stated Moseley met the appeal deadline and has requested a hearing from the Environmental Review Tribunal (ERT), with the help of Lake Superior Action Research Conservation (LSARC) and the law offices of Eric Gillespie.

Now, SOAR has announced the preliminary hearing will be held Tuesday, November 19, 2013 at 10 a.m.

Both hearings will take place at the Captain Tilley Community Centre, 592 Highway 552, in Goulais River.

Prior to those hearings, SOAR has announced there will be two public meetings held, hosted by Moseley and LSARC Co-Chair George Browne, to inform concerned residents of the perceived dangers posed to human health by industrial wind turbines.

Written requests from concerned citizens to make submissions at the ERT Hearings must be made by 10 a.m. Wednesday, November 13 to the ERT's Eva Pietrzyk at eva.pietrzyk@ontario.ca

The MOE, on October 4, 2013, green-lighted SP Development Limited Partnership's proposal to build a renewable energy facility, consisting of 11 wind turbines designed to generate a total capacity of 25 MW, in the unorganized Townships of Pennefather and Aweres.

SOAR and LSARC both oppose industrial wind development, not only in Algoma but also province-wide, insisting wind turbines are harmful to human health, a disruption to wildlife and the environment, costly and inefficient when it comes to power generation, and an eyesore on the Algoma landscape.

Those appealing the process must provide evidence of claims that a wind farm will be harmful to human health, wildlife and the environment.