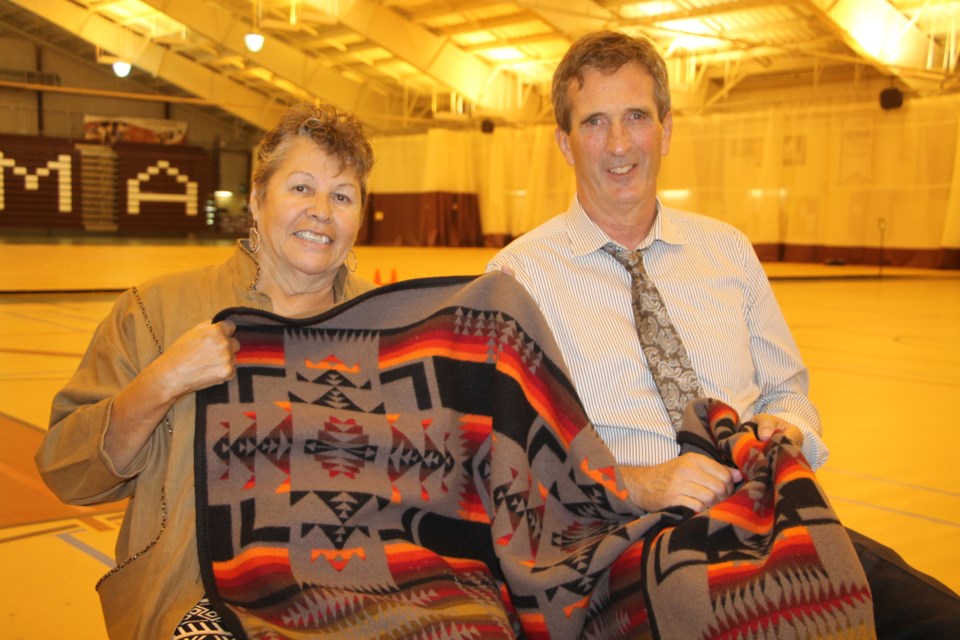 A large group of people gathered in a room at Algoma University’s George Leach Centre Wednesday, as the injustices and struggles of Canada's indigenous people were recounted, one blanket at a time.

“It’s very impactful when you relive it, it’s always got that pain,” said Shirley Horn, Algoma University chancellor, and a survivor of Shingwauk Indian Residential School.

Algoma students, staff and faculty, as well as some out-of-town visitors, participated in the KAIROS Blanket Exercise.

The exercise, presented by the Ottawa-based, non-profit, ecumenical KAIROS Canada social justice group, walks its participants through Canadian history from an indigenous perspective.

Participants, KAIROS states, are invited to ‘experience the real history of indigenous people that is rarely taught.’

As the exercise’s participants go from blanket to blanket (always standing upright and unmoving while on each blanket), they ‘move’ through Canadian history while narrators go over the long series of injustices Canada’s indigenous people have experienced over the centuries.

This is done in an effort to educate the exercise’s participants.

Those injustices include the suffering and death experienced by indigenous people resulting from the introduction of European diseases to this continent, dishonoured treaties, and the residential school experience.

Media were not permitted to photograph or shoot video of Wednesday’s activities, as the blanket exercise often brings out tearful and traumatic reactions from indigenous participants, many of them residential school survivors, their friends and family.

“When I take a look back at all those struggles, I am so pleased that I’m sitting where I am, because it’s not just a random seat being the chancellor of this university, this goes all the way back to when I was a seven-year-old child when I first walked up those steps," at the Shingwauk Indian Residential School, said Horn.

“I felt very emotional…each time I go through it (remembering the residential school experience) I’m more grateful when I come out the other end, and my family and my community are doing what they can to change things,” Horn told SooToday.

“This is a wonderful exercise because it demonstrates very dramatically what did happen to our people.”

“It takes time, you don’t just get over an experience like the residential schools in a year, I know people who’ve gone to their grave and haven’t gotten over the experience,” Horn said.

“There is progress (toward reconciliation), but first we had to go through healing for ourselves as aboriginal people, and that took quite a few years, and now we can look at the future, we’ve taken back our identity and we now have an opportunity to teach the non-aboriginal people and I sense there is a willingness from them to learn.”

Horn returned to the former residential school site in 2005 as a postsecondary student, graduating from Algoma University's Fine Arts program with Honours in 2009.

She is also an original co-founder of the Chlldren of Shingwauk Alumni Association (CSAA), and served as Missanabie Cree First Nation Chief in the mid-1990s, involved in a tough but successful struggle to win 15 square miles of territory from the federal government.

“We’re not mandating anything (such as making indigenous studies a part of Algoma University’s core curriculum, as some postsecondary schools have), we’re trying to create that climate, that culture, where Western and traditional (indigenous) knowledge is flowing together and we’re trying to build understanding.”

“What I got today was a representation of some of the true history of Canada and its relationship to indigenous people in a much more interactive way…I have that academic knowledge but to see it acted out was powerful,” Chamberlin said.

Chamberlin said he and Horn agreed the blanket exercise would make an excellent stage play, perhaps to be presented at Algoma at a future date.

“I do this exercise two or three times a week in various locations, I do a fair bit of travelling,” said Sara Anderson, KAIROS project coordinator.

The blanket exercise, which has been presented by KAIROS for 20 years, has about 400 facilitators in total, with different levels for elementary school children, adults, government departments interested in cultural competency training and First Nations communities.

“The script is constantly evolving and we’re now updating it to include indigenous developments that have happened over the past couple of months,” Anderson said.

“I was very impressed by how much leadership indigenous people took in today’s exercise and how willing they are to share some of their stories, that really deepens the experience…I’m really impressed by how committed Algoma has been, and continues to be, to make sure indigenous culture is celebrated here.”

Progress has been made on awareness of indigenous issues, Anderson said, but added more needs to be done in terms of honouring treaties between the federal government and First Nations communities.