Maybe the terrorists are making a video to explain why they're releasing James Loney and his three peace-activist friends. Now that the execution deadline looming over Sault Ste.
Dec 11, 2005 2:01 PM By: David Helwig 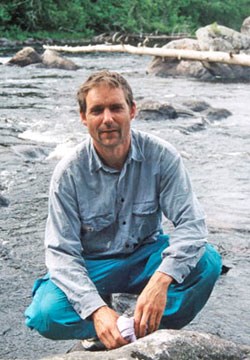 Maybe the terrorists are making a video to explain why they're releasing James Loney and his three peace-activist friends.

Now that the execution deadline looming over Sault Ste. Marie's James Loney has been exceeded by more than a day with not a drop of substantial news about the captives, speculation is starting to fill the void.

"It's quite possible they may be preparing a video to say why they are releasing him," says Bruce Kent, a 15-year-friend of hostage Norman Kember.

"It doesn't have to be bad news, that we haven't heard anything - they may be working on some way of getting off the hook without losing face," Kent says.

Norman Kember is a retired professor of physics from Pinner, Middlesex, England.

"My worry is, how do the captors extricate themselves from this, without losing face?" said Reverend Alan Betteridge, a friend of the hostage. "Either they lose face if they free them, or they are really out on a limb if they execute them. Somebody has to find a way to let them out of this."

Like Loney, Norman Kember is believed to have relatives here in Sault Ste. Marie.

If you have personal recollections of Norman Kember, SooToday.com welcomes your submissions by phone (941-0664) or e-mails sent to helwig@sootoday.com

"We have no information," Iraqi Interior Minister Bayan Jabr told The Associated Press today in Baghdad. "From the beginning I advised foreigners not to move freely and we are always ready to protect them."

'Two to three days can pass before we know what happened'

"The deadline has passed and we are now entering new territory," says BBC World Affairs Editor John Simpson, who's currently in Baghdad.

"It's difficult to be too hopeful about the future but, of course, there's always the possibility that this time will be different," Simpson said, referring to previous executions of British hostages in Iraq.

Yesterday, the global news media were using words like "hope" in their headlines about James Loney and his fellow abducted peace activists facing execution in Iraq.

Today, with the negotiation deadline long past and no word about the hostages' wellbeing, the word "concern" is creeping into more and more headlines.

Liz Colton at the U.S Embassy in Baghdad said the releases were in no sense a response to the demands of the Iraqi captors.

British Defence Secretary John Reid said this morning on that his government has received no new information.

There's also been no indication that negotiators sent to Baghdad from England had been successful in making contact with the kidnappers.

A portrait of Jim

The Sunday edition of the Toronto Star contains an account by Dwyer Sullivan, former director of the Toronto Archdiocesan Youth Corps, explaining why the photograph of James Loney shown at the top of this article was selected to accompany a number of Loney-written articles.

The image was snapped on the Mississagi River between Elliot Lake and Sault Ste. Marie.

"Jim is kneeling by the water, central but not domineering," Sullivan writes. "His face conveys sincerity, honesty and directness. There is no lie in Jim. He has the gift of stating very clearly what he sees the problem to be and what the possible solutions are," Sullivan said.

"We understand that the timeline might not be what it seems," Robin Buyers from Christian Peacemaker Teams told CBC Television yesterday. "Although it has attracted a great deal of attention here, it may not be as important to those holding our friends."

"I hope that people are continuing to pray with us and that it will be a joyous result," Monsignor Bernard Burns of Precious Blood Church told the CBC.

"We're definitely hungry to hear something, anything at this point," said Jim Loney's brother Ed. "Awful is an understatement .... It's draining and really we're just waiting,"

Ed Loney wants the kidnappers to be aware their goals are similar to those of their four prisoners, who were abducted at gunpoint in Baghdad on November 26.

"I want them to realize that they really do have people that are actually on their side," he said. "The four workers have been working hard for the release of detainees in Iraq."

"We haven't had contact," said Jerry Stein, a representative of Christian Peacemaker Teams who's staying with Jim Loney's parents here in Sault Ste. Marie. "We take that as a good sign," Stein said.

Canadian Press is reporting that the kidnappers made no contact whatsoever with authorities yesterday, even though this was the day they promised to kill their four captives unless both the Iraqi and U.S. governments released all prisoners currently held in Iraq.

In Auckland, New Zealand, relatives of kidnapped Harmeet Singh Sooden said the only word they received on Saturday was a 6 a.m. phone call from the Royal Canadian Mounted Police.

There was no news to report, the RCMP representative told them. Members of Sooden's family have booked plane tickets to Jordan for the middle of this week, hoping to be present if he's released.

However, the Iraqi government announced on Sunday that it will close all borders and ban travel across provincial boundaries to protect voters during parliamentary elections this Thursday.

Anas al Tikriti, a British Muslim negotiator currently in Iraq, says he's been trying to contact the kidnappers since last week, but negotiating release of the hostages will be very difficult.

In Clear Brook, Virginia, the daughter of hostage Tom Fox was expressing optimism.

"Both my father and I believe that the Iraqi people have legitimate concerns regarding the U.S. occupancy and presence in Iraq," Katherine Fox said in a video released to CNN. "We believe that these grievances, however, will not be resolved by taking my father's life."

She said the decision to extend the original deadline of last Thursday confirms her father's belief that the Iraqi people are honorable, just and willing to negotiate.

There's been considerable media speculation about the fact that in the most recent video released by the kidnappers, only the British and U.S. hostages appeared, wearing orange jumpsuits.

In other hostage cases, orange jumpsuits are believed to have been used to signal a pending execution.

Loney and Sooden, citizens of nations that have stayed out of the Iraqi conflict, are nowhere to be seen in the latest videos, leading to speculation in some quarters that their lives may be spared.

"I think sometimes we need to believe in miracles and so that's what we're choosing to do right now. And to remember that we cannot imagine the goodness that is possible," the CBC was told by William Payne, a friend of James Loney.