A 'punch-drunk boxer' comes back for more

Tony Martin accepted the New Democratic Party nomination tonight at the United Steelworkers of America union hall. The three-term MPP will run in the next federal election.
0
Mar 11, 2004 8:17 PM By: Chris Shoust 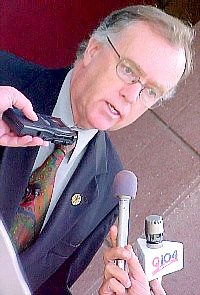 The three-term MPP will run in the next federal election.

Facing no opposition in his candidacy (Genesio Paciocco withdrew from the race last week), Martin said "It's our time again, so let's go get 'em."

Martin, who lost the last Sault Ste. Marie provincial election said he has been called "a bit of a hot punch-drunk boxer who doesn't know when to quit."

At the Thursday-night meeting, Martin's name was thrown into the ring by St. Basil Secondary principal Folgo Della Vedova, whose experience throwing sharp pointy sticks and as throws coach for Lake Superior State University's track and field club might prove useful in any upcoming election.

Seeking the nomination for the Conservative Party are Kenneth Walker and Cameron Ross.