Can a chiropractor straighten out Sault Ste. Marie City Council? Or maybe we need an Algoma Central Railway conductor to keep them on track? After Wednesday's 4:30 p.m.
Aug 8, 2002 1:00 AM By: David Helwig 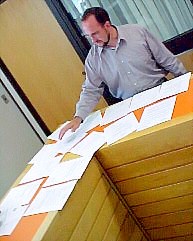 Can a chiropractor straighten out Sault Ste. Marie City Council?

Or maybe we need an Algoma Central Railway conductor to keep them on track?

Applicants included not one, but two chiropractors (Grace Tridico and Bryan Dumanski), who submitted their applications in the same envelope, White says.

City Council will meet 30 minutes before its regular meeting on Monday to select Brandt's replacement.

Councillors are free to nominate others, if they wish.

This news was E-mailed to our subscribers at 5:14 p.m. Wednesday

To receive free, real-time E-mail updates of SooToday.com's exclusive coverage of local news, just send an Email with "SUBSCRIBE" in the subject line to helwig@sootoday.com.