At Algoma University tonight, Megan Williams performed a traditional dance at a National Day of Remembrance and Action on Violence Against Women commemoration of the 20th anniversary of the massacre of 14 women at l’École Polytechnique de Montréal.
0
Dec 6, 2009 8:19 PM By: David Helwig 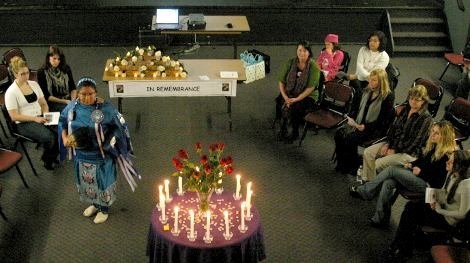 At Algoma University tonight, Megan Williams performed a traditional dance at a National Day of Remembrance and Action on Violence Against Women commemoration of the 20th anniversary of the massacre of 14 women at l’École Polytechnique de Montréal.

Guest speaker Anne O'Connor recalled how local women responded to the tragedy in 1989, calling for more involvement of men in future memorials.

The following statements were issued by the Ontario Federation of Labour and the office of Prime Minister Stephen Harper.

On December 6, 1989, 14 bright, talented, young women were murdered at l’École Polytechnique de Montréal in one of the most tragic acts of violence against women in our country’s history.

Their deaths galvanized the need to end violence against women in the hearts and minds of Canadians.

Soon after this tragedy, a powerful resolve grew out of a simple statement to ‘first mourn, then work for change.’

As we mark the 20th anniversary of this tragic event, Canadians remain committed to preventing and eliminating violence against women while making our communities safer for all of us.

Canadians have not permitted the impact of December 6 to fade. Our determination to end violence in all its forms remains strong.

Today, on Canada’s National Day of Remembrance and Action on Violence against Women, we should all take time to remember and reaffirm our commitment to continue working to protect the lives, dignity and equality of all women.

TORONTO, ON - December 6, 2009 marks the 20th anniversary of the 1989 École Polytechnique Massacre, in which 14 women were singled because they were women and murdered.

The École Polytechnique was not only a college, but also a workplace.

Two of the women murdered that day were members of the Canadian Union of Public Employees (CUPE).

"Violence against women is constant and unrelenting," said Irene Harris, secretary-treasurer of the Ontario Federation of Labour. "It has been 20 years since the Montreal Massacre, but the threat of violence is still a constant reality for all women. Since that tragic day, 486 women and children have been killed in women abuse situations. The violence is there in our workplaces and in our homes. We know that workplace violence takes a tremendous toll on women both psychologically and physically and there is the reality that workplace violence can be lethal."

"As long as the issue of violence against women is not given priority and prominence, women will continue to live in danger," Harris said.

The Ontario Federation of Labour has been working with our affiliated unions and the women's community to press the McGuinty Liberal government to take immediate actions to end workplace violence and ensure working women have workplace protections, legislative rights and strong violence prevention plans in Ontario workplaces.

The Occupational Health & Safety Act is being amended (Bill 168) to include harassment and domestic violence as it follows women into the workplace.

We welcome these protections; however there must be strong and enforced regulations with the bill.

The Employment Standards Act has provisions that include job protection for 10 weeks of compassionate leave.

The definition for compassionate leave should be expanded to cover abused women who need time to address legal issues, find housing, child care and time to heal.

Like expanded compassionate leave the right to alternative work, flexible hours and job transfers to a different work location should all be options for women dealing with violence.

The Workplace Safety and Insurance Board policy on compensation for chronic stress is too restrictive.

The policy must be expanded to cover workers who experience harassment, verbal and emotional abuse.

"To honour the memory of Teresa Vince, Gillian Hadley, Lori Dupont and the thousands of women who have faced violence we must take every measure possible in the legislature, at the bargaining table and in the workplace to ensure that violence against women in all its forms is ended," Harris said.

"While much more needs to be done at the provincial level, we have achieved some important victories and we continue dialogue with the McGuinty Liberal government around the further needed reforms," said Harris. "Sadly, the story at the federal level is much different and much more bleak. The Conservative push to dismantle the long gun registry through Bill C-391, if successful, will cost women their lives."

The impetus for the long gun registry emerged in response to the events of December 6, 1989 and it has been successful in reducing gun-related spousal homicides by 50 percent since its implementation.

Still, long guns were used in 72 percent of firearm-related spousal homicides in 2008, pointing to the continuing need for the registry and expanded gun control.

The Ontario Federation of Labour is working in co-operation with the Canadian Labour Congress campaign to preserve the long gun registry.

"Our vision of equality must lead to a world in which girls and women are safe in their homes, schools, the streets and in their workplaces," said Harris. "It is a world we can create."