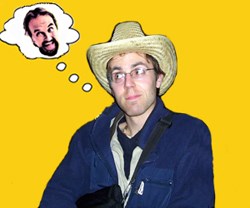 In the red corner, with a combined weight of over 500 pounds, wearing electric guitars used for loud rock and roll is Sta...rtle...fish.

In the blue corner, the challenger, weighing less than 200 pounds, often seen in amusing outfits, with an entourage of puppets, armed with songs for 7-year olds is Mr. Fre...d...Penn...er.

Friday night's match-up is looking to be a showdown of age and preferred bedtime.

Startlefish will be performing at the Downbeat Lounge on October 15th and 16th beginning at 11:00 pm. This local rock and roll band focuses primarily on original songs taken from the band's forthcoming CD, but has also been known to thrown in appropriate cover songs by artists like John Lennon, Lou Reed, and David Bowie. Admission is free of charge and audience participation is not required.

Fred Penner will be performing on Friday night, October 15th as part of the Algoma Fall Festival. Fred is known to all children under the age of 12-years old. He sings original material as well as children's standards, entertaining and amusing all with his wit and charm. Audience participation is a must. Penner's show will begin at 7:00 pm. Tickets for this "one-night-only" event are available at the Station Mall Box Office (945-7299).

It might not exactly be a match of "Rumble in the Jungle" proportions, but it will certainly seperate the men from the boys (not to mention the women from the girls).

(Pictured above is Christopher Walls, of Startlefish, thinking about his competition.)