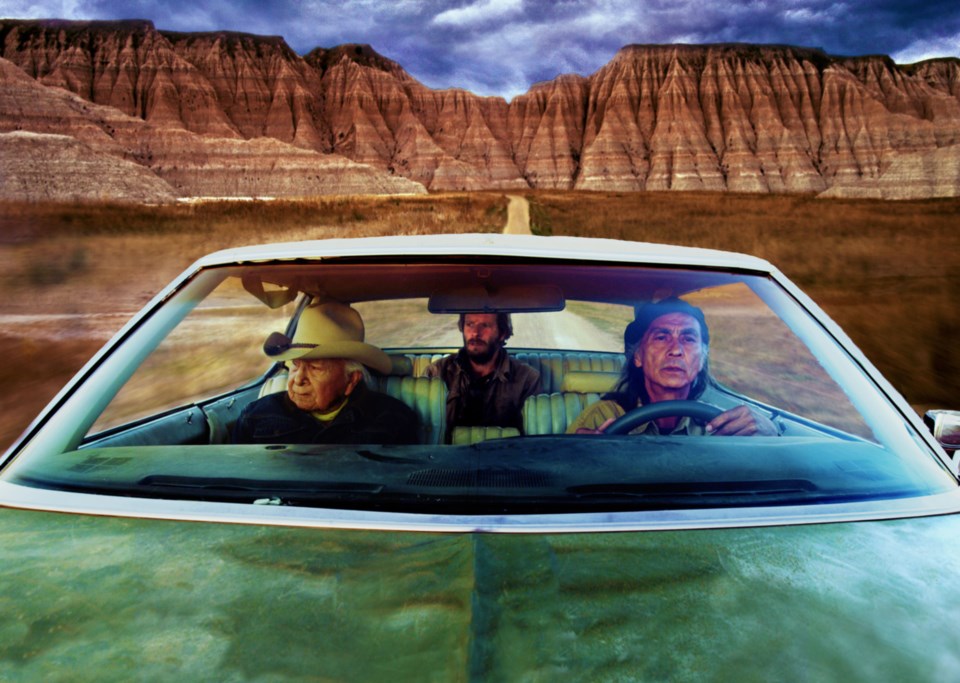 Scottish filmmaker Steven Lewis Simpson calls his latest independent film, 2016’s Neither Wolf Nor Dog, a miracle that’s come on the back of an insane amount of work.

The film, starring Dave Bald Eagle, Christopher Sweeney and Richard Ray Whitman, was shot in Pine Ridge Indian Reservation in South Dakota and parts of Nebraska over the course of 125 hours during an 18-day period.

Simpson, speaking to SooToday from his headquarters in Bulgaria, says that Neither Wolf Nor Dog has been packing theatres in small towns around the world since its release.

“The fact that it has a beginning, a middle and an end is still kind of like a miracle to me,” he laughs. “The fact that we pack theatres and we’re getting such high audience scores - I don’t think it’s because of the filmmaking per se, other than the fact that I had the skillset to make it happen.”

Neither Wolf Nor Dog, which was adapted from author Kent Nerburn’s award-winning 1994 book of the same name, is essentially a story that revolves around a white author who gets brought into present-day Native American life in the Dakotas by a 95-year-old Lakota elder and his sidekick.

Simpson, who spent 13 years working on A Thunder-Being Nation - a documentary about Pine Ridge Indian Reservation - says that he wasn’t looking to do another Indigenous story after 2008’s full-length feature film Rez Bomb, which was also shot in Pine Ridge.

But the filmmaker felt that given his experience with that Oglala Lakota community, he could relate to Neither Wolf Nor Dog - and its elder character, played by the late Bald Eagle - in a way that other filmmakers couldn’t.

“I could clearly understand that concept, and it also is an interesting way of going into an elder’s reality - and particularly, feeling the contemporary echoes of Wounded Knee,” said Simpson. “Wounded Knee has always kind of been centre stage for me, in terms of a lot of the work I’ve done out there.”

They key to telling Indigenous stories, Simpson says, is not to become overly conscious of the approach, whether cultural or otherwise.

People in the film industry generally want to represent Indigenous stories in the 'truest cultural sense' by incorporating elements such as pow wows and racial discrimination into films, but Simpson says that’s a false premise to begin with.

“Your obligation is to tell the story of these individuals - you’re not telling a story about a culture,” he said. “So for me, it’s not about putting Lakota people on screen, it’s about...being true to them as individuals.”

Once he assembled his cast for the movie - which includes Bald Eagle, and Indigenous actress Roseanne Supernault, among others - Simpson knew he “couldn’t go wrong.”

The climax of the film takes place at Wounded Knee, where a massacre carried out by the United States Army in 1890 resulted in the slaughter of several hundred Lakota, mainly women and children.

Bald Eagle - whose people, the Miniconju of Cheyenne River Indian Reservation, were among the slaughtered in the massacre - improvised his entire scene at Wounded Knee, deviating from the script entirely.

“He was closer to the reality of the massacre than even the character he played,” Simpson said.

Simpson says that after the film was released, he could see Indigenous and non-Indigenous people talking about Bald Eagle’s performance afterwards.

“I think he makes people listen to their heart,” he said. “It’s a pretty wonderful thing.”

Now, Neither Wolf Nor Dog has taken on a life of its own in small towns across the globe, but not without countless hours spent by Simpson promoting the independently-released film.

“The thing is, if you make a film with integrity, you kind of end up doing it the hard way,” said Simpson. “The easy way in film is the hard way, so it’s even more grueling in terms of how much of one’s life it consumes.”

Neither Wolf Nor Dog will be shown at the Sault Community Theatre Centre Sept. 18-19, with an educational screening of the film slated for Sept. 30.

Tickets are $16.50 and can be purchased through the theatre centre website.