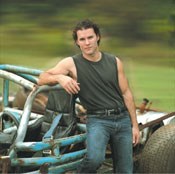 The singer's "Thicker Than Blood", taken from his Wide Open CD, was last spotted at number 56 and climbing on Country Music News National chart.

Rick Henry has the classic "kid moves to Nashville" story with a few spicy twists. Yes, Rick Henry moved to Music City seeking fame and fortune, but wound up building race cars, piloting an ultra light airplane, and believe it or not (according to his website) bounty hunting. As his website aptly notes, "fugitive recovery is not for wanna be cowboys." For the sake of country music marketing - he couldn't have dreamed up a better tale. His testosterone tale of the kid from Sault Ste. Marie wrestling fugitives, gives Henry a street-credibility and country and western legitimacy by providing a backdrop of grit and struggle.

Rick Henry spent his early years in Nashville by performing at the infamous Bluebird Cafe while struggling to pay the bills. Fortunately his adrenaline-inducing sideline work provided him with the fodder for songs that would eventually wind up on his debut CD, Wide Open. With tracks like "Bounty Huntin' Man", Henry gives a definitive image of his target audience - the "man's man".