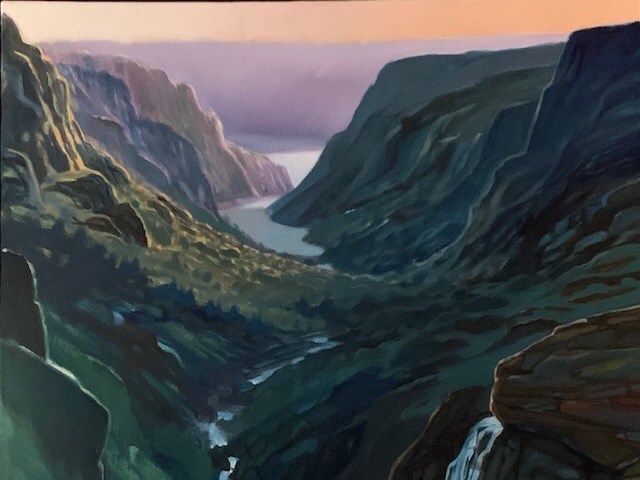 When a major retrospective of John Metheany's paintings opened in 2008 at Art Gallery of Algoma, the Sault-based artist decided to shake things up a bit.

Opening nights are often attended by people distracted by wine and fellow attendees.

Supposedly the star of the evening, art often becomes a secondary consideration.

With 100 paintings representing his entire working life on the walls, John thought there might be a better way.

"He wanted people to spend time in the gallery," says his daughter, Jan Metheany-Traveson.

"He would watch them drink wine and not come back."

"Instead of an opening, my father had a closing," Jan tells SooToday.

John Metheany decided to work in the gallery through his entire month-long 2008 one-man show, painting a massive mural 40 feet long and tall enough to require scaffolding.

"He worked every day," remembers Jan. "Some people would come back every day."

The larger-than-life mural attracted larger-than-usual crowds, and the traditional opening-night party was held instead on the show's closing night.

A larger-than-usual quantity of smaller Metheany oils sold in subsequent weeks at Roses Art Gallery and Framing on Bruce Street.

John Milton Metheany died on Wednesday here in the Sault at age 85, after many years of ailing health.

He definitely did things his own way.

A Michigan-born artist who built a log cabin in 1968 at Montreal River Harbour from driftwood and other salvaged building materials assembled without power tools, Metheany had lived in the Ontario Sault since retiring in 2001 after a lifetime of teaching art at Michigan State and Western Michigan University.

"While being aware of past and present artistic currents, John Metheany looks towards his own experiences of life to guide him," said Michael Burtch, who was director-curator at Art Gallery of Algoma at the time of the 2008 show.

"He can readily summon his vast knowledge of art historical styles to glean from them what is useful and meaningful today, synthesizing such disparate sources as the American Hudson River Valley School with the Group of Seven. The synthesis is definitely Metheany," Burtch said.

"Metheany seldom makes preparatory drawings or painted studies directly from specified places, as did Cezanne, the American landscapists Bierstadt, Cole and Lawson, or other Romantic or impressionistic painters," said the curatorial materials prepared for the Art Gallery of Algoma show.

"Like Poussin, and later Lauren Harris, he develops his compositions directly from mind, memory and knowledge."

"The number of John’s works included in public and private collections throughout the United States and Canada number well over 1,000, consisting mostly of landscape paintings in oil upon which his reputation is based," the family said in a statement issued following his death.

Metheany brought in furniture of his own making to his 2008 exhibition, to encourage visitors to sit down and enjoy the art.

He left behind a large private collection of more than 100 paintings prepared for exhibit.

"We don't know what will happen to those," Jan tells SooToday. "If interested, people can contact the family."

The family is planning a private celebration of John’s life at his cabin, as well as a post-pandemic public retrospective exhibition of his private collection.

Memorial donations to the Alzheimer Society will be appreciated by the family.