Other events this week include a techno-educational workshop, an online music festival campfire cooking workshop
Apr 20, 2021 4:00 PM By: SooToday Staff 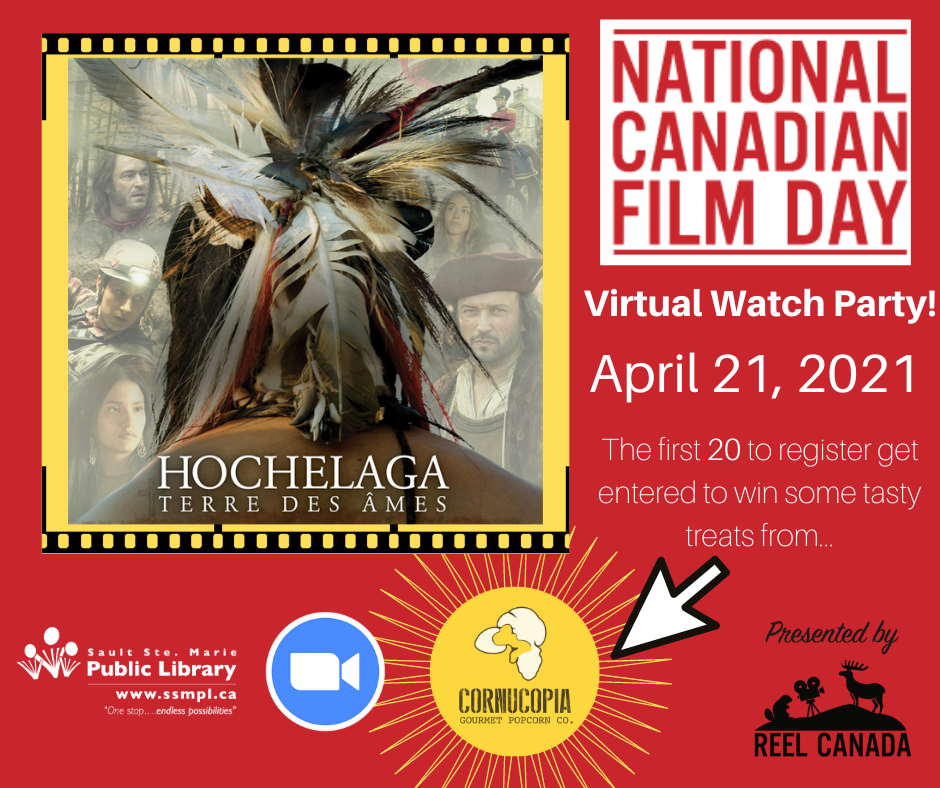 Canadian National Film Day is on April 21, and the Sault Ste. Marie Public Library is hosting a virtual watch party to celebrate. Everyone is invited to the screening of “Hochelaga: Terre des Ames (Land of Souls)”, a Canadian film directed by Franҫois Girard, starring Samian and Raoul Max Trujillo.

The first 20 people to register for the online event will automatically be entered to win a gift basket featuring goodies from Cornucopia: Gourmet Popcorn Co. Sault Ste. Marie. The film, which runs for 100 minutes, will be streamed via Zoom on April 21 at 6 p.m.

Hochelaga: Land of Souls can be described as Outlander meets Canadian history. Archeologist Baptiste Asigny travels through time and visits his Iroquoian ancestors upon the arrival of explorer Jacques Cartier in 1935.

“This movie is about the history of how Montreal was discovered. A sinkhole appears during a football game at Molson Stadium and it leads to an archeological dig by a Mohawk archaeologist. Through his discoveries, he finds artifacts of the past and the film travels back in time to the period where Montreal was discovered,” said Bentley Ahonen, reference technician at the Sault Ste. Marie Public Library.

“We chose to show this film because it highlights an Indigenous voice and provides insight into Indigenous heritage, and we thought that was important for our community,” Ahonen said.

“Given the current situation, we felt that a virtual event will provide people with an opportunity to enjoy a Canadian film from the comfort of their own house, while still being connected to the community,” he said. “I’ve watched the film and I think it’s a terrific Canadian film. I hope that everyone else will enjoy it as well.”

With the province now under a four-week lockdown to help stop the spread of COVID-19, Saultites are encouraged now more than ever to continue following public health guidelines and stay home as much as possible.

So each week, SooToday will share some of the virtual events taking place to help you make the most of these unprecedented times and have fun safely at home.

If you or someone you know is planning a local virtual event (concert, class, celebration, etc.), send the details to news@sootoday.com.

Other events taking place this week include:

To help support families during the pandemic, the Conseil scolaire catholique Nouvelon Parents’ Participation Committee is offering a series of techno-educational workshops during the month of April. These workshops hope to assist families as they continue to support their children and their learning. The following two virtual workshops, led by CSC Nouvelon techno-educational specialists, will be offered via Microsoft Teams:

Brought to you by the SUNFEST team, this year’s Festival of World Beat will celebrate local, national, and international artists in London, Ontario. The pandemic-friendly, online festival will run from April 22-24, and will stream pre-recorded performances from several of London’s signature music venues, such as Wolf Performance Hall in Downtown London, Aeolian Hall in Old East Village and the PA Shop’s staged studio in East London.

With warmer weather coming soon, it’s time to learn how to make some delicious campfire snacks when you’re outside with the family. The Greater Sudbury Public Library is offering a free cooking class on Sunday, April 25 at 3 p.m. that will show you how to make some simple recipes:

The event can be viewed on April 25 at 3 p.m. via Facebook, and a replay of the class will be available afterwards.

How to Grow a Giant Pumpkin Seminar 2021

It's never too early to start planning for giant pumpkin growing season. The Sault Ste. Marie Public Library’s seminar on how to grow a giant pumpkin is now available online on the library’s Facebook page.

If you would like to reserve your free seedling, you can contact the Sault Ste. Marie Public Library at 705-759-5447. The deadline to sign up for your free pumpkin seedling is April 30. Plants will be available for pick-up at the entrance of Bellevue Park Greenhouse from May 25 to May 31 from 9 a.m. to 4 p.m.

Have an event coming up? Add it to our Community Calendar here.

Did we miss something? E-mail us at news@sootoday.com