Beat those winter blues with some blues 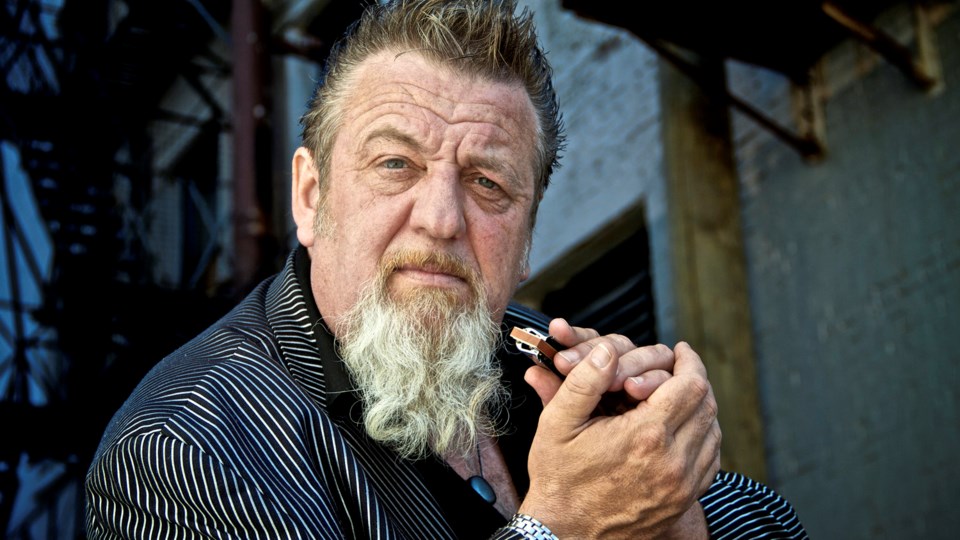 The Sault Blues Society (SBS) and Black Fly Jam want to help you combat those winter blues with – well – some blues.

The SBS turns the tables on Friday the 13th as it presents Canadian harp wizard Harpdog Brown at the Rockstar Bar on Friday, Jan. 13.

Harpdog will be joined on stage by Jordie Edmond on guitar and Mark Gough on drums.

As a lead up to his Friday night performance, Harpdog will join the weekly Mojo jam night at Reggies West on Thursday, Jan. 12.

Advanced tickets are $40 each and can be purchased at The Tech Box Office, open Monday to Friday from 10 a.m. to 5 p.m.

Harpdog Brown is a gifted singer and an imaginative harmonica player that has been a strong force in Canada’s Blues scene since 1982.

Born in Edmonton, Alberta and based in Vancouver, British Columbia, he’s crossed tens of thousands of miles playing club dates and festivals in Canada, North Western United States and Germany.

Over the years Harpdog, yes that is his real name as his passport will attest, has issued four CDs to critical acclaim. Back in 1995 his Home is Where The Harp Is won the coveted Muddy Award for the Best North West Blues Release, from the Cascade Blues Association in Portland. He is still the only Canadian to do so. A Juno nomination for the best Blues Release in Canada followed that same year. Teamed up with Graham Guest on piano, his CD Naturally was voted #1 Canadian Blues Album of 2011 by The Blind Lemon Survey. Most recently Harpdog was honoured with his second consecutive Maple Blues Award for Harmonica Player of the Year by the Toronto Blues Society. Add to that a second consecutive nomination for Blues Artist of the Year by the Western Canadian Music Awards. These are outstanding accomplishments that clearly solidify his rise in popularity and a new beginning in his career.

The album that delivered his first Maple Blues Award, titled What It Is, maintained status in the blues and roots charts throughout the year and in fact was ranked #20 worldwide Roots Music Report: Top 100 Blues Albums of 2014. Two songs on that album, Whiskey Bottle and In My Younger Days remained in the TOP 100 Songs for that same year.  It is a great collection of live, off the floor originals and a few well placed covers that resonate well with blues fans of every vintage. Harpdog's original How Come is a fan favourite and earned regular rotation on BB King's Bluesville on SiriusXM.

It is clear that Harpdog rules the blues scene in the Vancouver, BC area where his project, Harpdog Brown and The Travelin' Blues Show launched a new album Sept. 1, 2016 followed by a North American Tour. After mounting their cross-Canada tour in the fall of 2015, this will be another a collaboration project with none other than Little Victor Mac. In fact, Victor is producing the album and will also make a guest appearance. Labeled the Beale Street Blues Bopper and the King of Grit, Victor has played with Hubert Sumlin, Louisianna Red, RL Burnside and is working on his 9th album, Buzzed, Busted and Broke with Kim Wilson, Carl Sonny Leyland and Big John Atkinson.

As Harpdog recently put it, "After more than 30 years of blood, sweat and tears, it feels like I'm just getting started. I'm only 54 - that's young in the blues world!"

Harry Manx has been dubbed an “essential link” between the music of East and West, creating musical short stories that wed the tradition of the Blues with the depth of classical Indian ragas. His unique sound is bewitching and deliciously addictive to listen to.

Born on the Isle of Man, Manx spent his childhood in Canada and left in his teens to live in Europe, Japan, India and Brazil. He honed his hypnotic live show on street corners, in cafes, bars and at festivals. But it was Indian music that captured his attention and in the mid 80s he began a five-year tutelage with Rajasthani Indian musician Vishwa Mohan Bhatt (Grammy winner with Ry Cooder for A Meeting by the River). Receiving the gift of Bhatt’s custom-made, self-designed Mohan Veena (a 20-stringed sitar/guitar hybrid) was the catalyst for Harry to forge a new path with his now signature east-meets-west style of music. While the mohan veena itself is beyond exotic, Manx uses it within traditional Western sound structures.

A successful touring performer, Manx has brought his “breathtaking” solo shows across Canada and into the USA, Australia, and Europe. He has appeared at many prestigious festivals, world-class theatres, concert halls and infamous Blues clubs around the globe. Playing the Mohan Veena, lap steel, harmonica, stomp box, and banjo, Manx quickly envelops the audience into what has been dubbed “the Harry Zone” with his warm vocals and the hauntingly beautiful melodies of his original songs.

It’s in the live setting, Manx says, that the bridge between “heavenly” India and “earthy” American blues is most effectively built. “Indian music moves inward,” he explains. “It’s traditionally used in religious ceremonies and meditation, because it puts you into this whole other place. But Western music has the ability to move out, into celebration and dance. So when we play the Indian stuff on stage, it has the tendency to draw people into something really deep; they’ll get kind of quiet and spacey. Then we’ll play some more Western music, and it grounds them once more, they sort of come out of the mood the Indian music had put them in and get into the performance. I love to see that working — that effect on the audience. My goal has always been to draw the audience as deep as possible into the music.”

Manx is a prolific artist, releasing nine albums in a eight-year span with no signs of stopping. He has received seven Maple Blues Awards and his mantel shelf also holds honours from the Canadian Folk Music Awards, Vancouver magazine Georgia Straight, and the South Australia Blues Society. He received CBC Radio’s Great Canadian Blues Awards for 2007 and his albums have garnered five Juno nominations.

Blend Indian folk melodies with slide guitar blues, add a sprinkle of gospel and some compelling grooves and you’ll get Manx’s unique “mysticssippi” flavour. It’s hard to resist, easy to digest and keeps audiences coming back for more.