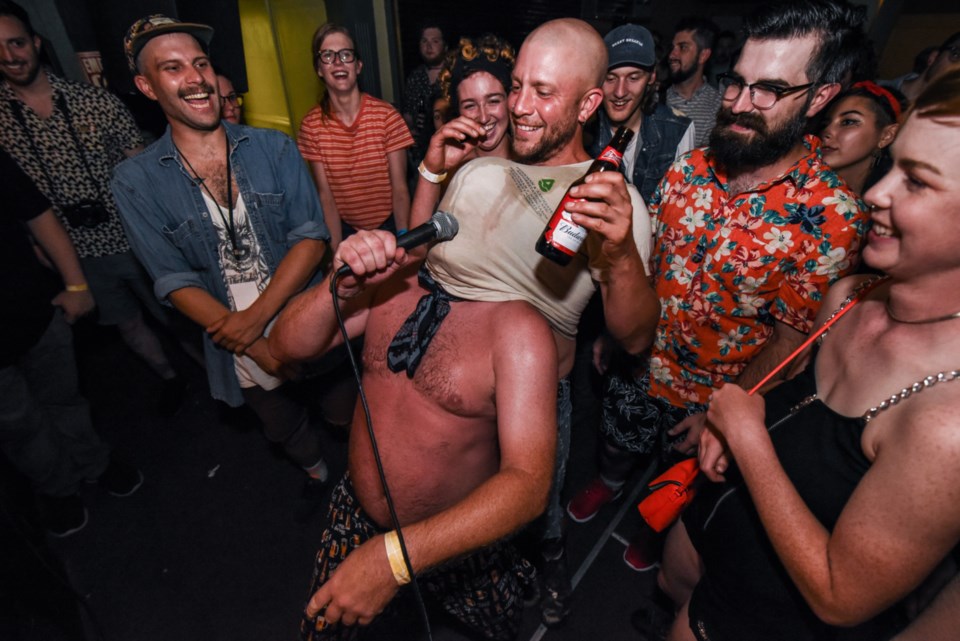 Hamilton’s own B.A. Johnston is bringing his shirtless-and-ranting style of comedic absurdity to the New American Pub next week in support of his latest musical offering, The Skid is Hot Tonight.

“I’m bleeding everywhere, but I put some Band-Aids on it,” said Johnston, who had just gashed his hand while in the midst of some food preparation when SooToday gave him a shout earlier this week. “It’s still bleeding, but under the Band-Aid.”

“Thought my knives were dull - I was like, ‘these are not sharp knives,’” he continued. “Maybe they are quite sharp, maybe I don’t need to sharpen these for a little while.”

Johnston says The Skid is Hot Tonight - a sprawling, 21-song collection released through the Transistor66 label - is admittedly “quite long.”

“I don’t like records being short, because you have to get up and flip them over,” he said. “But then I listen to the compact disc in my car, and I’m like, when will this end?”

“So I’m not sure, maybe I should’ve done a bit more editing.”

His latest tour, Johnston says, has been well-received.

He seems more than a little surprised by this.

“It’s been good, it’s been a bit busier than normal, which is both good and bad,” Johnston said. “Surprising. I just never expected anyone to show up, so I’m like, now there are people there. I’m unaware of how to deal with it.”

“I guess it’s like when a band goes from playing clubs to stadiums, expect for me, it’s like playing to 10 people...to playing to 40 people,” he laughed. “It takes some time to wrap your head around it.”

It’s hard to say if Johnston is eager to get on the stage for Thursday’s gig at the New American.

“It’s nice to finally get one, I guess. It’s been a bit of a struggle.”

“Because no one wanted me to play there,” he said, laughing. “None of the venues seemed that interested in bringing me.”

“What would one of them say? It doesn’t seem like our thing,” he continued. “That’s fair, that’s fair.”

With song titles like As I Am In Tim Hortons, I Realize I Hate Tim Hortons, I Miss 90’s Hash and We’re All Going To Jail (Except Pete, He’s Gonna Die), it’s no wonder that Johnston’s material doesn’t exactly float everyone’s boat.

Due to that not-so-mainstream material, Johnston will usually play anywhere he can.

“It’s always nice when you know the bartender,” he said. “I have played sit-down theatre places a few times. I kind of like a place where you can drink.”

“I like playing a bar where I would go to the bar. Does that make sense?”

Hell, the guy has even played venues where wing night was the headliner.

“I’ve been billed under wing night. I mean people love wing night, let’s be fair,” he laughed. “It’s a tough one to beat.”

The singer/songwriter recently held a contest to coincide with the release of his new album, with the winner getting an opportunity to watch a KISS concert from the nosebleeds with him in Toronto this past March.

In the end, Johnston says that he picked his cousin to accompany him to the show - at his mother’s request.

“I’ve been to a lot of concerts, but there’s never been like an actual fight,” Johnston said. “Me and my cousin had to get in between like, four 50-year-old stockbroker types beating the crap out of a very annoying drunk dirtbag who was in our aisle, who basically kept egging them on until finally, the one guy snapped and started clobbering this guy.”

“He was all like, ‘get him off me before I hurt him.’ He was mostly just getting punched in the face.”

It becomes clear to SooToday that Johnston is kind of at odds with his love of KISS. He says that he finds them “problematic,” and prefers to enjoy the band on a very “base level” - or in other words, he really enjoys the explosions.

“I don’t want to think too much about my like of the band, because they’re all terrible people,” he quipped. “Their songs are quite stupid.”

He’s pretty sure Thursday’s show at the New American is $10.

“I mean, it could be worth 10 dollars,” he said, albeit somewhat unconvincingly. “What else are you going to do on a Thursday, I guess?”

Tickets are available at the New American Pub, Case’s Music, or online via Brown Paper Tickets.