The toxin produced by Cyanobacteria in blue-green algal blooms produces horrifying health problems in humans and animals and incidents of the blooms are rapidly increasing in frequency and scale
Jan 5, 2020 5:00 PM By: SooToday Staff 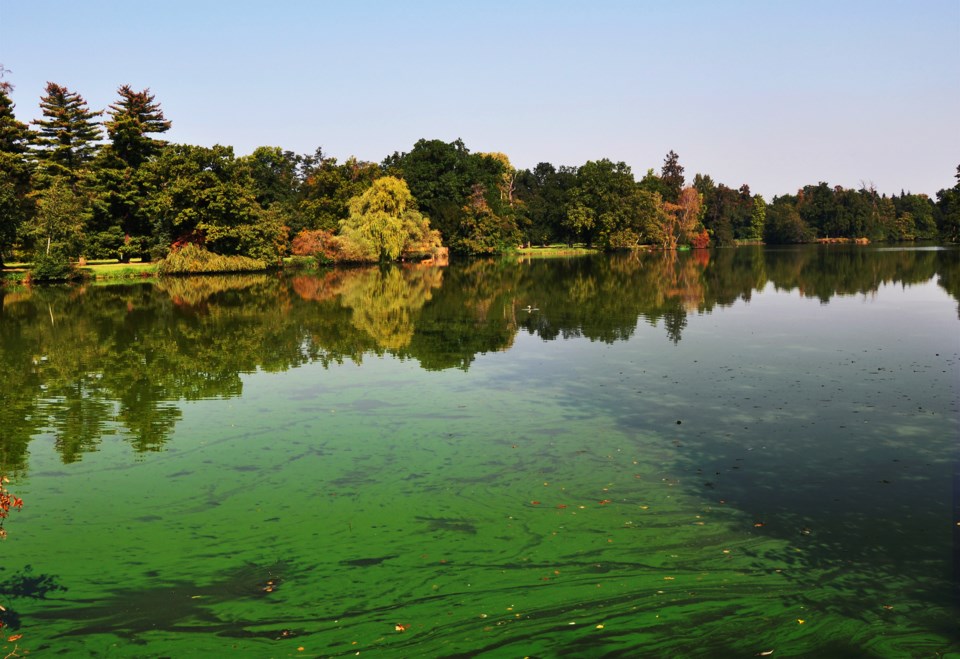 SooToday has received the following letter to the editor from Peter Chow who calls on readers to pay attention to yet another sign of the calamities of global climate change –– a sign that is close to home.

The past several years, Lake Superior has been experiencing its first wide-scale blue-green algae blooms, initially off the shores of Wisconsin and Minnesota. Last summer, in an unprecedented event, an algal bloom stretched 50 miles along the shoreline near Superior, Wisconsin.

On an evening in September 2019, a boater some 35 km. east of Thunder Bay noticed green patches stretching far out into the open waters of the lake. The next morning, a kayaker in the same area, noted the same unfamiliar sight: patches of green on the surface of Superior’s waters.

This was the first documented incident of a blue-green algae bloom in the Canadian waters of Lake Superior.

Scientists looking into the emergence of blue-green algae in Lake Superior believe this will continue and only get worse.

There really isn’t a history of blue-green algal blooms in Lake Superior, because historically, Lake Superior has been too cold and too deep.

The organism in blue-green algae is called Cyanobacteria. Its optimum growth is in warmer water temperatures. Lake Superior, no stranger to global warming and warming waters, is heating up faster than the global average of lakes. Scientists at the University of Minnesota Duluth have found that Lake Superior summer surface water temperatures have increased by 5 degrees over the past 30 years. Lake Superior is warming at the rate of 2 degrees Fahrenheit per decade, three times the global average, according to the study.

Huge rainstorms in the past few years carried massive amounts of sediment into Lake Superior. And that sediment carried a lot of nutrients - phosphorus and nitrogen - from forest floors, sewage treatment, urban and industrial detergents, and farm fertilizer runoff - which feed algae growth. Big rainstorms - the kind of events that researchers believe have triggered recent blooms — are expected to happen more frequently, especially in the Upper Midwest, an effect of climate change.

Increased algal blooms are also linked to the invasion of zebra mussels in the Great Lakes. These filter-feeding mussels eat good algae and release blue-green algae back into the water.

Cyanobacteria is one of the oldest organisms on the planet. Cyanobacteria release toxins, harmful to the liver and brain, sickening humans and animals. There have been reported cases of pets and even livestock deaths due to exposure. When you see really green, opaque, pea-soup appearing water or if you see surface scum, those are the areas that you really have to keep dogs and kids out of.

Cyanobacteria also release a specific toxin called BMAA (beta-methylamino-alanine), which is implicated in the development of ALS, or Amyotrophic Lateral Sclerosis, more popularly known as Lou Gehrig Disease. ALS is a horrible, untreatable disease, invariably progressively fatal and a gruesome way to die. Given a choice, you would rather have cancer or even Alzheimer's.

Lake Superior's algal blooms are nothing like on the scale of Lake Erie. At the western end of Lake Erie, there is a toxic blue-green algae bloom covering 620 sq. miles of water. The western basin of Lake Erie has experienced harmful algal blooms for decades. The basin’s warm, shallow waters are enriched with nutrients from nearby sewage treatment plants, industrial detergents and fertilizer runoff from agriculture, providing fertile habitat for blue-green algae.

Several years ago, the city of Toledo, Ohio was forced to shut down its water supply from Lake Erie due to illness caused by algal blooms. Boiling the water would only increase its toxicity while drinking it would cause “abnormal liver function, diarrhea, vomiting, nausea, numbness or dizziness”, read a statement from the City of Toledo, warning residents to “seek medical attention if you feel you have been exposed”.

After the news broke, bottled water quickly vanished in concentric circles around the city. A state of emergency was called and the national guard arrived with bottled water. Many residents of Toledo and neighbouring towns and areas, still drink only bottled water.

More ominously, Cleveland Clinic neurologist Erik Pioro has plotted a cluster of over 1,000 cases of ALS in the northwest corner of Ohio, near Lake Erie, many more cases than would be expected, given the normal incidence of ALS. Similar clusters of ALS have been found around lakes with blue-green algal blooms throughout the US.

The Wisconsin DNR reports that blue-green algae is present in every inland lake in the state.

This past summer, the Algoma Health Unit announced the presence of a blue-green algae bloom in Cloudy Lake in the Sylvan Valley.

The canaries are singing ever more loudly.