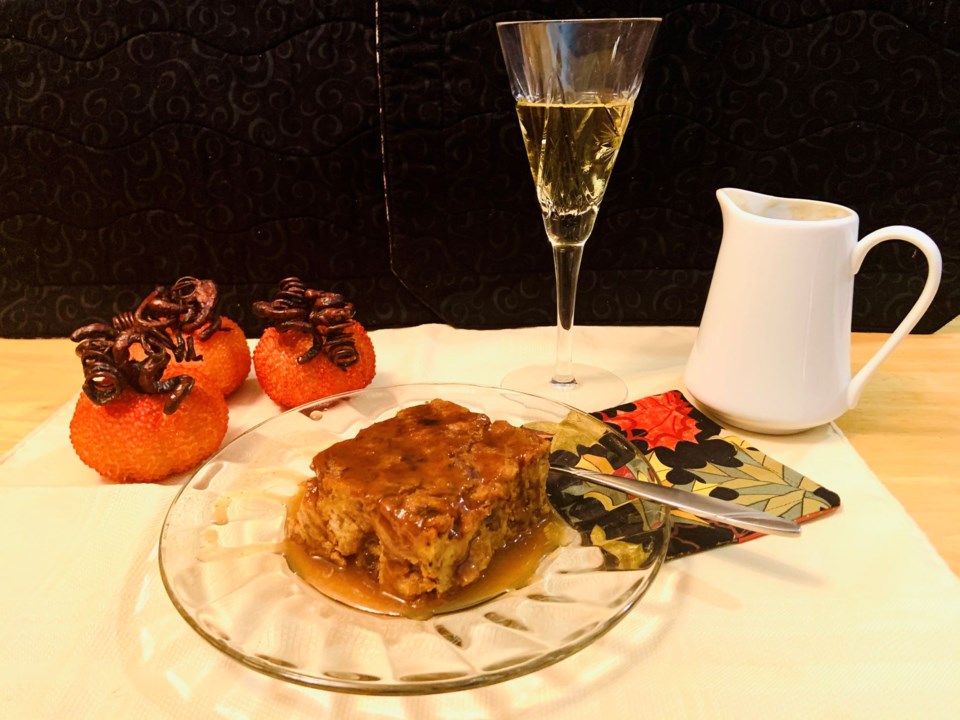 As it is more properly known, the Ermatinger-Clergue property just off Pim Street between Bay and Queen is a National Historic Site. For much of my life, though, it was always the ‘Old Stone House’. It is a great place to visit, giving us insight into the early days of this settlement below the St. Mary’s River rapids. In addition to the house itself, there is the Block House which Francis H. Clergue used as a residence in building his empire, and the new state-of-the-art interpretive centre fronting on Bay Street.

The following recipe is inspired by one of the dishes that has been baked in the Ermatinger kitchen, and it is a great one to try now at the climax of ‘pumpkin season’.

Spices - with the egg or challah bread, use 3 to 4 tsp. of pumpkin pie spice.

Whisk the half and half, pumpkin, brown sugar, eggs and spice, including the cinnamon and rum or vanilla in a large bowl to blend.

Fold in the bread cubes, and then stir in the raisins.

Transfer the mixture to an 11 by 8 inch greased glass baking dish.

Let stand 45 minutes to allow the ingredients to blend together well.

Bake the pudding for about 40 to 45 minutes, until firm, and the top and edges have turned a golden brown. A knife inserted in the middle should come out clean.

Melt the butter in a small saucepan

Add the brown sugar, bring to a simmer, stirring until the sugar is melted.

Remove from heat, and stir in the whipping cream thoroughly

Add the rum, to taste.

Note: it is well worth doubling the recipe for the sauce, as people will want more, and what is left will be glorious with vanilla ice cream.

This is a great dessert… and if you aren’t in polite company you can even lick your plate!

While a great cup of coffee would be just fine with this pudding, I know that a delicious dessert wine such as a rich Pedro Ximenex  (or PX) sherry or a good Canadian ice wine would match really well.

‘PX’ refers to the grape used for these sweetest of sherries. Currently available is the Perez Barquero Los Amigos, $ 19.95. This richly-hued ‘sticky’ carries flavours of fig, clove and honey. Absolutely yummy.

The Henry of Pelham Special Select Late Harvest Vidal, also $19.95, boasts sweet apricot and melon flavours offset on the finish by a note of lemon or grapefruit.

If you want to go all-out, both Inniskillin and Jackson-Triggs have Vidal Ice Wines which would be great with the Pumpkin Pudding.

The Jackson-Triggs Reserve is $39.95, presenting oodles of ripe peach, orange marmalade and raisin, with enough acidity on the finish to keep it from being cloying.

The Inniskillin available at $49.95 for 375 ml. and $7.95 for 50 ml., regularly carries scores in the mid-’90s from various critics. Decanter refers to its “gorgeous, creamy vibrant palate”, while the Wine Enthusiast tells us to expect “layers of maple syrup, butterscotch and butter brickle.”

South Africa’s Nederburg The Winemasters Noble Harvest 2018, $16.95 for 375 ml. would also be immensely good with the Ermatinger pudding. The International Wine & Spirit Competition awarded it a 97, referencing ”honey, nutty elements, bittersweet marmalade and rich sultanas.” This is not slated for the Sault, but check availability for on-line ordering on Saturday, Oct. 31. It would be worth the effort.

The LCBO is gearing up for the holidays, and so the releases look to carry more and more upscale wines. Fortunately, even at generally popular price points, there are scads of good wines on this release.

Plaimont Témoignage Saint Mont 2017, $14.95 is a distinctive blend of grapes we don’t usually encounter – gros manseng, petit courbu, and arrufiac. With its score of 92 from wineandspiritmagazine.com, expect a rich wine that has “succulent fruit and salty, nutty tones” that are “tightened up by vivacious acidity.”

The Winery of Good Hope Unoaked Chardonnay 2019, $14.95, from South Africa bears an 89 from winealign.com’s John Szabo, who says that “the palate is ripe and round, delivering plenty of white and yellow-fleshed orchard fruit, pear and Golden Delicious apple.”

Expect good things from Italy’s Marche region with the reliable producer Velenosi’s Querciantica Verdicchio Dei Castelli Di Jesi 2019, $16.95. Britain’s winebuyer.com explains that this wine is made from grapes that are intentionally slightly over-ripe, fermented by carefully selected yeasts to produce a full and round wine. Five to six months in stainless steel on the lees leads to a wine that shows honey and herb and apple with a characteristic slight bitter almond note on the finish.

Kim Crawford Signature Reserve 2018, $24.95, is one of four Sauvignon Blancs from New Zealand on this release. It is exceptional and distinctive, with delicate aromas reminiscent of both herb and orange blossom. It is smooth and clean and creamy with subtle flavours leading to an expansive and satisfying finish with citrus fruit playing off against the slightly bitter but pleasing impression of grapefruit pith.

Paul Mas Single vineyard Collection Réserve Grenache/Syrah/Carignan 2018, $16.95, is an attractive red blend from the Languedoc region of France. Is a dependable fruit-forward wine carrying raspberry and cherry notes along with herbal and mocha notes at the end.

Loma Larga Lomas Del Valle Quinteto 2018, $20.95, is a Chilean blend of Cabernet Franc, Syrah, Malbec and Pinot Noir. It is “plummy, spicy and leafy…youthful and refreshing and has time on its side.” – timatkin.com – 92.

While there are a number of more expensive wines on the release, I would expect that they would be hard-pressed to out-perform the Ruffino Riserva Ducale Oro Gran Selezione Chianti Classico 2015, $49.95, from Tuscany. As a “Gran Selezione”, the wine was aged for three years before bottling, and always in more neutral containers, from concrete to large Slavonian oak casks to barriques which were at least four years old. After continued aging in bottle, we finally have a wine that is gorgeously smooth, intense and focused, with dark fruit and tobacco notes emerging late and lingering. The wine is balanced, integrated, elegant and long. It will keep for years but is so polished it is already enjoyable.

Already in stock at the Great Northern Road store is Mouton Rothschild’s Mouton Cadet Heritage 2017, $24.95. Predominantly Merlot, this wine is structured and deep. Though a bit austere on opening, with integrated tannins cloaking the fruit slightly, given a chance to breathe it soon reveals good satisfying dark fruit. It is a great bet for buying now and laying down for a time. Presently, however, it will serve admirably with roasted meats such as lamb or beef, especially if a spicy sauce is involved.

There is still time to book a table (up to six people) for the Mediterranean tasting at Tempo in the Marconi Multicultural Event Centre being held on Tuesday, Nov. 10.

Guests will be treated to a gastronomical tour of five countries with dishes prepared by Chefs Dan and Brennan, along with appropriate wines matched with the dishes. Cost is $75 per person, which includes tax and gratuity. Call 705-942-5556 to book.

Former Saultite honours her Nonna Ortenzia with recipe for meatballs
Nov 25, 2020 10:00 AM