It's not just the grapes, it's the temperature

Tressot, Anyone? In this column, Vin takes us inside the workings of one aspect of the wine industry and shares his picks for best bang for your buck at the LCBO
May 5, 2021 10:00 AM By: Vin Greco 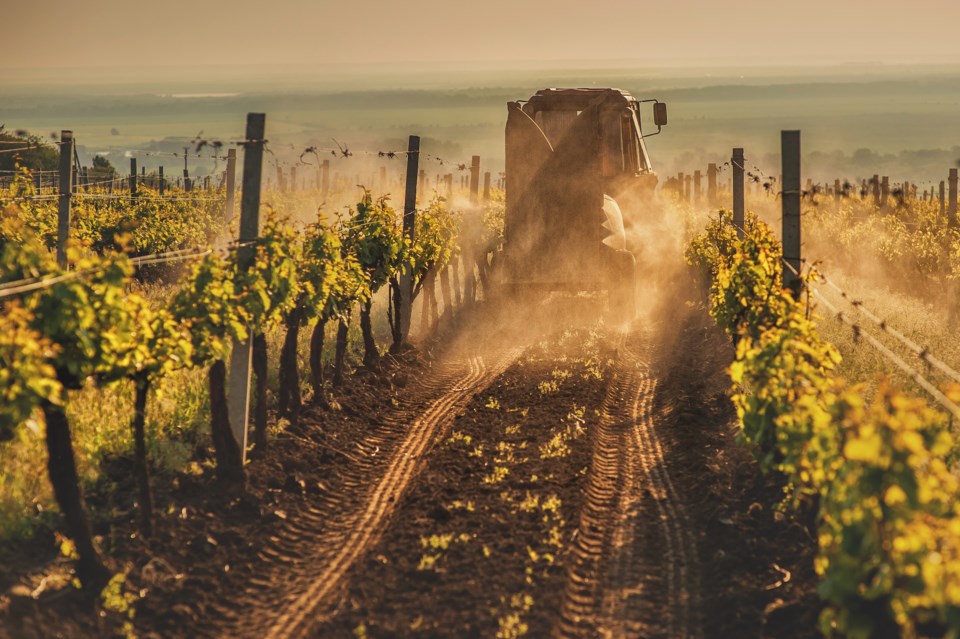 I am sure that, by now, everyone has suffered at one time or another from “COVID Fatigue” and we find our minds closing up to yet another news bulletin about COVID-19 and its impact. Please, no more.

The same can hold true with talk on Global Warming. Haven’t we heard enough already? Unfortunately in both cases, the answer is that ‘No, we haven’t.’

Sometimes, it can be interesting to learn how people are responding to a challenge. A recent set of Wine Enthusiast articles caught my attention, as they explained the efforts being made in Bordeaux and Burgundy to explore the possibilities of different wine grapes that might be better suited for the warmer environmental conditions.

In Bordeaux, where traditionally the red grapes used are Cabernet Sauvignon and Merlot primarily, with support, for example, from Cabernet Franc, Malbec, and Petit Verdot, some are now looking at other suitable grapes that have until now been ignored or found in more southerly areas.

According to writers Roger Voss and Kathleen Buckley, Bordeaux wines that 30 years ago had alcohol levels of about 12 per cent, have seen a rise over the years to up to 15 per cent as evidenced in the 2018 vintage. The concern is that, if no action is taken, in 40 years Bordeaux, as it has been known, would no longer exist. With much higher alcohol levels, the wines would no longer display the characteristics for which they were famous.

The French National Research Institute of Agriculture, Food and Environment oversaw a study of 52 different grapes that were planted in a controlled plot in Bordeaux with the intention of determining which ones might play a role in maintaining “the acidity, structure and aromatics that the world has come to associate with classic Bordeaux.”

After extensive testing and blind tastings, six grapes were approved this past January for inclusion in the Bordeaux blends going forward. It is important to note that Bordeaux wines, in both their red and white expressions, are predominantly blends, and so ‘tweaking’ the grapes that can be used in supporting roles can make sense.

Of the six grapes, two are important in Portugal. Alvarinho is a principle grape in making Vinho Verde, and the red Touriga National is highly valued in the Dao and Duoro regions.

The other four grapes are all French, generally found in the Languedoc and near the Pyrenees. Incidentally, one of the four, Castets, actually originated in the vicinity of Bordeaux in the Gironde. It was said to have been found in the woods in 1870, but it is so rare that there are less than three hectares of the vine growing in France.

The other three grapes are all crosses –that is, they are the product of using two existing grapes to create a third. Both of the red crosses have Cabernet Sauvignon as one of the parents.

These “new” vines may not exceed 5 per cent of a vineyard’s plantings and can comprise no more than 10 per cent of the blend.

In Burgundy, faced with the same global warming problems, the approach is slightly different, as there is a reluctance to bring in varietals not common to the region. While Bordeaux wines tend to be blends, in Burgundy, the whites are Chardonnays and the reds Pinot Noirs; Aligoté is a lesser-known white in Burgundy, and in the sub-region of Beaujolais, the grape used is Gamay Noir. No blending to speak of here.

In his article, “Burgundy Embraces New Varieties to Combat Climate Change”, writer Jacopo Mazzeo explains that “as temperatures rise, the best vineyard sites become too warm. Vines are subject to increased risks of spring frost, sunburn and drought. The resulting wines, once defined by their elegance, subtlety and gracefulness, are getting riper by the year.”

One approach to combat this would see the planting of different clones of Pinot Noir that produce less sugar and ripen later. There are actually 47 ‘approved’ clones, but only a handful are now used. Some of the neglected clones might provide the answer.

Other Burgundy producers are exploring the use of different rootstocks, including vitis riparia, a climbing grapevine native to North America.

In the past, a number of grape varieties native to the region were abandoned because of the difficulty in getting them to ripen fully. Now, what were once handicaps may have become virtues. Growers have begun experimenting with such grapes as Aubin, César, Roublot, and yes, Tressot. Just as Castets was an obscure red grape from near Bordeaux, Tressot is an original burgundy grape that had almost gone extinct.

Apparently, the Burgundians are reluctant at the moment to try varieties from outside their region, be it from Italy, Greece or elsewhere. New World countries such as the United States or Australia philosophically have a lot more latitude in exploring different kinds of grapes than do European regions with their traditional and highly regulated production practices.

For now, all we can do is wait to see how this will all play out.

While we are waiting, there is ample time to try some decent Bordeaux and Burgundy wines that are available at present.

Chateau Haut Rian 2018, $14.95, is a typical Semillon Sauvignon Blanc blend that earned a Wine Enthusiast 90. Critic Roger Voss tells us that “this bright and fruity wine… has a ripe character, with hints of yellow fruits as well as warm acidity. An attractive tangy character gives the wine lift.”

(We don’t need to worry about confusing Haut Rian with Bordeaux’s classic Haut Brion Blanc, which retails for $1,600… If you have to try it, it is available for home delivery!)

Mouton Cadet Bordeaux Bordeaux White, $16.35, an easy entry from the Mouton Baron Philippe de Rothschild collection, includes a third grape, Muscadelle, in the mix, which contributes significantly to the aromatics. The LCBO tells us to expect “flavours of quince, vanilla, nuts and green pear with light cantaloupe note.”

While many of the classed growth Bordeaux are available online, priced all the way from the hundreds to thousands of dollars, there are many sound, entry-level reds on our local shelves.

Though the classic Medoc wines tend to be Cabernet Sauvignon dominant, almost all the wines currently in Vintages and on the general list seem to lead with Merlot. This trait is something we tend to associate with St. Emilion and Pomerol.

That said, try the Lion and the Lily Red Blend, now $2 off at $15.85 until May 23. The LCBO tells us to expect “aromas and flavours of plum, blackberry, fresh herbs and oak. It's medium-bodied and fruity with silky tannins capped with a long finish.”

Chateau Clairac 2018, $17.95, is a Wine Enthusiast “Editor’s Choice. It “is smoothly textured from wood aging. A hint of smokiness pairs well with black-plum flavours, offering richness, structure and aging potential.” – 91.

Chateau Pipeau Saint-Émilion Grand Cru, $44.95, is a Vintages Essential, and therefore always available. It is a big wine with definite oaky notes, lots of fruit and smoke smokiness, perfect for pairing with roasts and steaks. If you find lesser-priced wines have you wondering what the fuss is about, then try this for a clearer picture.

As for Burgundy, we have very good entry-level wines in our stores. You will have to order anything that is more up-scale and site-specific. Burgundy can be tricky to navigate. Whereas in Bordeaux you can have extensive estates, in Burgundy a single vineyard may be shared by several owners, each of whom might have title to specific rows of vines.

From the $25 range that populates our shelves, the prices can escalate significantly. For example the Domaine Leroy Romanéé St.Vincent Grand Cru 2000 is available online in Vintages for $10,245.00… about $100 a sip!

In whites, Bouchard Père & Fils Macon-Lugny Saint Pierre, currently, $3 off in Vintages for $19.95 is a good expression of Burgundian Chardonnay. Lightly oaked, it has a smooth texture and round mouthfeel, carrying flavours of crisp apple and pear, some nutty notes, and delivering a bright finish.

Vignerons des Grands Vignes Les Fossiles Bourgogne Aligoté 2018, $17.95, will provide a good insight into this ‘poor relation’ in the Burgundy line-up. This example has solid reviews. In style, it is a more crisp wine than a chardonnay, with flint, peach and saline notes on the nose. On the palate, which has good depth, there are straightforward characteristics of lemon and crisp apple.

The Les Vénérables Vieilles Vignes, $27.95, spends 14 months on its lees in probably neutral stainless steel vats and oak barrels that are probably neutral, undergoing malolactic fermentation to take the edges off before bottling. The result is a clean and lovely white with a hint of salinity. It has persistent creamy flavours of apple, honey and lime. It consistently performs over its price point.

Turning to reds, the consensus with the Nuiton-Beaunoy Hautes Côtes de Nuits 2018, $23.95, is that this is a riper, perfumed example with some complexity and richness displaying a subtle earthiness and herbal notes to accompany flavours of plum and both red and dark cherry.

The similarly priced Chanson Réserve du Bastion Bourgogne Pinot Noir, $24.95 comes from the Côte d’Or, a much prized region in Burgundy. The winemaker was “Winegrower of the year” in 2014 for the Revue du Vin de France, and the fruit is from sites across the Côte d’Or which didn’t make it into the ‘first ‘wines of those properties. It displays some smoke and forest floor notes to accompany flavours of tart cherry and cranberry with a hint of spice. It is relatively smooth with a medium body.

Louis Jadot Bourgogne Pinot Noir 2108, $26.95, is a true success.  Sommelier Jane Staples explains that it is a “smooth and silky French Pinot Noir. Fragrant with soft raspberry, tart cherry, subtle baking spice, mocha and sous bois on nose, then repeated on the palate. What impressed me about this wine was the harmonious balance between all elements. Polished tannins and a very satiny texture, with a lingering echo of flavours on the finish.” – 91.

Whether it be white or red, Burgundy or Bordeaux, there are many more examples in our stores, and more showing up all the time in Vintages. Don’t hesitate to ask our Wine Consultant, Jeanie Fremlin, for further guidance in exploring the wines of these two regions.