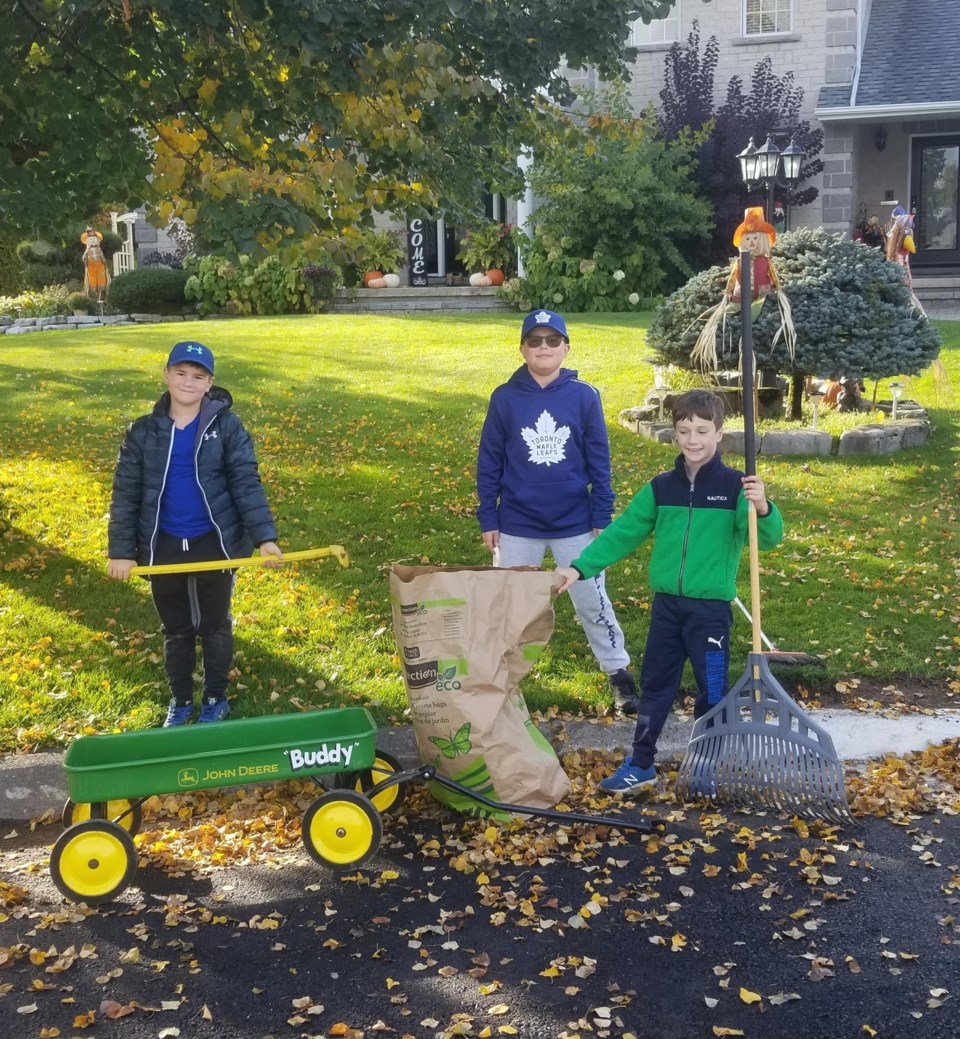 Ethan Edwards (right) with his friends Bryce Belgue (left) and Aaron Keough (middle) raking the leaves in their neighbourhood to raise money for charity. Photo supplied

Sometimes seasonal chores aren’t so bad when you know it’s for a good cause. 8-year-old Ethan Edwards has decided to rake leaves around his neighbourhood and give the money he earns to charity.

The Grade 3 student at St. Paul’s Catholic School had been asking his parents for weeks to do something that would raise money to help those in need. After discussing different options and different organizations, he decided that he wanted to donate to the homeless and the Canadian Cancer Society.

He chose the Canadian Cancer Society because of his interest in Terry Fox and choosing to help the homeless came from simply wanting to help them out.

Ethan says he enjoys raking leaves and is proud of himself for doing it as a way to give back.

“Last Sunday he asked if he could rake our lawn so I gave him a rake and some yard waste bags and off he went. An hour or so later I looked outside and he and a friend were raking my neighbour’s lawn,” said Brent Edwards, Ethan’s dad.

“My neighbour seemed very happy for the help and gave the kids $10,” Edwards said. “Shortly after that, he had a whole crew of neighbourhood kids out raking everyone's yards.”

“We decided we were going to help everyone out by raking their lawns,” Ethan said.

When the neighbours asked the kids about paying them, they told them the service was free but if they were willing to pay then all the funds raised will be donated towards helping those in need. In a few short hours, they managed to fill numerous leaf bags and raised over $100 to be donated to those in need in the Sault.

Ethan plans to continue to offer this service throughout the fall in his neighbourhood and 100 per cent of the proceeds will be donated to charities that help the homeless and the Canadian Cancer Society.

“It’s good for him because he sometimes struggles with learning, so it was a great opportunity for him. He always talks about helping people,” said Krysten Edwards, Ethan’s mom.

“We are extremely proud of his new venture and will be supporting him 100 per cent of the way including matching dollar for dollar every dollar he raises,” said Brent Edwards.