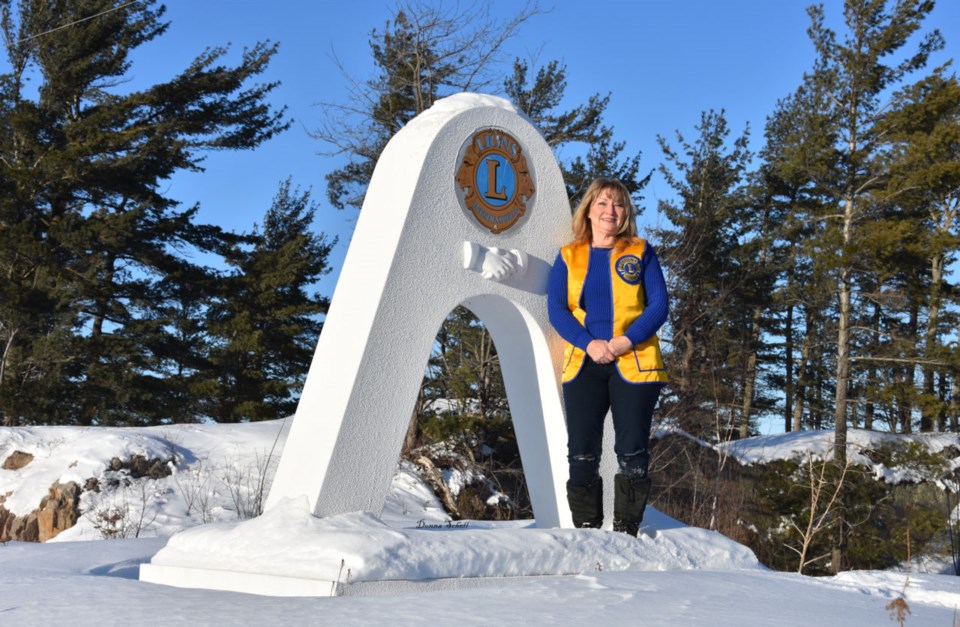 Carla Dixon Hendry standing in front of the Peace Arch along Highway 548 near the Bernt Gilbertson St. Joseph Island Bridge. Built in 2007, the Arch welcomes visitors to the Island.Donna Schell for SooToday

Carla Dixon Hendry is a middle-aged businesswoman, a cancer survivor and one who wears many hats.

“I am a hairstylist, a daughter, a good friend to many, a good listener, a teacher, gourmet cook and all-around handy-woman,” she said. “I am a volunteer. I take on too much sometimes and probably care too much, as well, come to the defence of someone who is treated unjustly.”

Hendry joined the St. Joseph Island Lions Club in 2013 and now serves as its spokesperson.

Initially, Hendry said she had no intention of joining a service club.

That all changed when she volunteered to help out her friend Mike Trainor, who now serves as club president, at a monthly pancake breakfast.

“I got out on the floor and started mingling and talking with people,” she said. “It just happened that a couple of people who were instrumental in the pancake breakfast had quit and Mike had asked me to join.”

Her first duties were co-chairing the pancake breakfasts.

In a telephone interview, Hendry made a number of changes, one of which was to encourage other members to join her on the floor, mingle and greet guests as they arrived.

“The whole atmosphere had changed,” she said. “We started to get larger crowds, some were coming more often, there were some changes made to the menu and it started to really take off, then the pandemic hit.”

She describes her fellow Lions as friends and family who just want to help in the community.

There were other changes to the ways the Lions Club operates as Hendry continued to serve her community as a member of the Lions Club.

For example, now, If there’s a fundraiser that no-one wants to chair it and run it, it’s going to go away she said.

“We can’t keep things alive just because they always were and we are trying to come up with new ideas,” she said. “As Mike said, ‘stagnation leads to death,’ so you have to change things, move with the times. I think we have done well to raise the money we have.”

In her role as the club communications person, Hendry has produced content for its website and shared live videos of the various functions the Lions were involved in beginning with Harvest Algoma in 2020.

The videos are helping raise the profile of the club with the community and the wider public. She's working on the club’s web page and, in the near future, will be introducing a new Facebook page. The new page will give potential donors a chance to tell the Lions Club where they want their donations to be spent.

Among the events Hendry has been involved with, Harvest Algoma stands out, she said.

“I thought it really brought the people of the Island together,” Hendry said. “Thank goodness for providing that service for the elderly, or those with health issues who couldn’t get to the Sault for groceries. It offered us an opportunity to get food to them.”

The Lions made up to 18 parcels of donated food and delivered them to those who were shut-in.

Any food left over was donated to St. Joseph Island and Area Food Bank, reaching even more people. If there was more than the Food Bank could take, food was taken to the Dr. Harold S. Trefry Centre in Richards Landing and seniors could help themselves.

“It really helped out the community,” she added.

Delivery day meant a safe-distanced outing for some to socialize with their neighbours while boosting their mood and spirits during the first part of the pandemic.

It also brought groups such as the Royal Canadian Legion Branch 374 and St. Joseph Township Fire Department together, helping where they could. The legion offered its parking lot as a staging area and the fire department delivered tables to set the food on.

“People stepped up to put themselves on the front line to do that,” she said. “We had members step up and take the risk to make sure others benefited. Our motto is to serve, and that’s what we did.”

Hendry shares a home with her mother in Laird Township.

During the initial onset of the pandemic in 2020, like many, she was mesmerized by everything that was happening and then the numbers affected by the virus started rising spread across the world like a wildfire out of control.

“Then we saw the horror going on in places like New York and Italy and I think we just became fixated and paralyzed at the same time because we’ve never experienced anything like this,” she said.

Hendry said she got through the first lockdown with some government relief from CERB that helped pay bills and she kept herself busy.

Hendry’s father passed away six years ago and the 2020 pandemic lockdown gave her the time to complete a number of outdoor projects around the home that her father started. Otherwise, it would have taken her about two years to complete them with only the weekends free.

The second lockdown gave her the blues. Not knowing for sure whether it was the grey skies or the time of year, she said January wasn’t bad but she found the adjustment harder.

“I’m very glad to be back at work again,” she said.

Co-incidentally, February marked her business's first anniversary and it was the third time she opened her doors that year.

The Lions Club received its charter on June 26, 1972. At the time, 36 members were listed on its charter. Today, the membership remains at about 34.

While organizations of all sizes are struggling to keep their doors open due to COVID-19, the St. Joseph Island Lions Club is thankful they have been able to maintain its motto, which is to serve the residents in its community.

In the beginning, Lions Club members were out in the public helping their community neighbours with such tasks as yard clean up and splitting firewood.

As time went on, so did their involvement in other projects raising money for such groups and causes over the years has included Matthews Memorial Hospital, Children’s Library, All-Tribes Camp, Blood Drive, Ride for Timmy, Seniors and Disabled Persons Advisory committee and Sault Area Hospital, picnic tables donated to ARCH and benches installed in Hilton Beach.

The not-for-profit Lions Club will continue to make small donations to groups such as the Lions Foundation and its various camps.

“But we’ve come to the point where we don’t want to just give $500 here or there let’s find something the community really needs that we can give a larger donation every year,” she said.

“There have been some changes to how we donate and where we donate,” she said. “We want to keep the money on St. Joseph Island.”

Bursaries are awarded annually to the graduating student from the Island in the Grade 8 and 12 classes who volunteer the most.

A portion of the membership dues goes toward Lions International and its various disaster relief efforts.

Even during the difficult financial times the pandemic brought for many, the Lions club was able to raise $8,800 to purchase 44 memorial tables at the Hilton Beach Community Hall, and three trolleys carts. The tables arrived July 28, replacing the 30-year-old tables and home-made trolley carts.

“That was a big accomplishment,” she said.

The pandemic has affected active organizations like the Lions. On hold is their community involvement such as Community Night, Hilton Beach Car Show, Art at the Dock and the Great Bucket List Challenge.

Typically, twice a year, members conduct their Adopt-a-Highway road clean-up. The area spans a five-kilometre stretch along Highway 548 from the 15th Side Road to the F & G Line, and two kilometres from Kent’s Corner to the Peace Arch near the Bernt Gilbertson St. Joseph Island Bridge.

The monthly pancake breakfast is on hold because of COVID-19.

“It’s not that we couldn’t open when we were permitted to, it's we don’t have enough members who are comfortable to be in the same room with 50 people, over and over,” she said. “We have to take in the safety of our own members. It would burn them out and decided not to.”

The Lions were forced to think outside the box to raise funds and the club came up with a highly marketable event.

On Feb. 4, the club launched its first on-line fundraiser, Raising the Island Spirit where unwanted items are donated to the Lions for the club to sell online.

The club also held two paint nights at the hall with every little bit helping the cause.

“I don’t think the pandemic has changed our mission at all. It’s just forced us to think outside the box and try to think of other ways to safely raise the money,” Hendry said adding the club is fortunate that it doesn’t have a lot of overhead.

It has a den at the Hilton Community Hall and a telephone and a comfortable bank account that they can donate if something comes up.

Having helped raise the $410,000 needed for an expansion to the hall, the club was granted an office.

Hendry said if you know someone on the Island who you think needs help, send an email to sjilionsclub1@gmail.com.

This year, Hendry will be stepping into a new role, the vice president’s position.