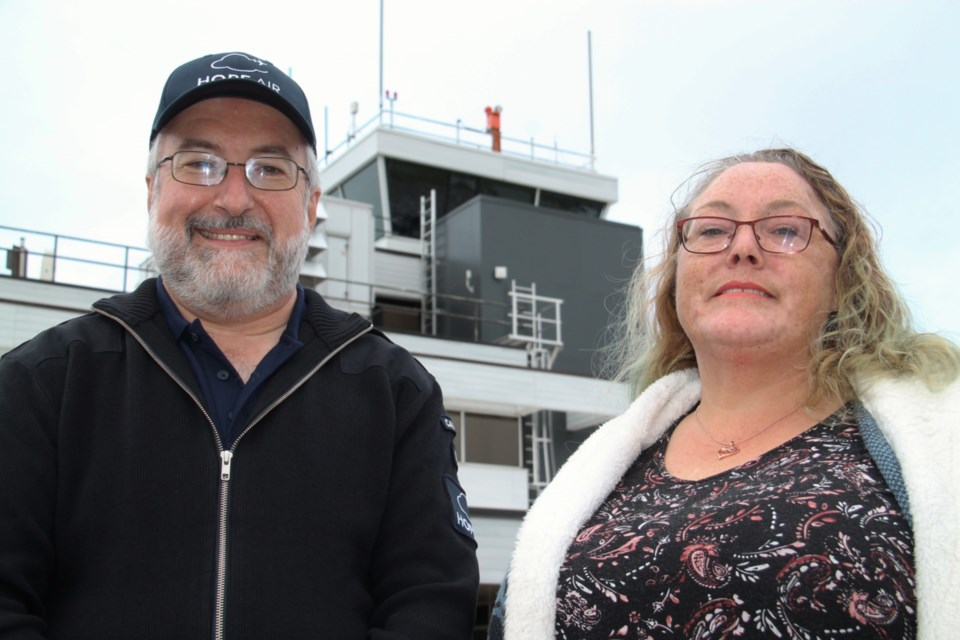 Hope Air is a major charity, but one which many are not aware of.

The Toronto-based organization’s volunteer pilots have carried out over 150,000 missions, transporting seriously ill people in geographically remote areas to medical treatment, such as surgery and other procedures, to and from leading edge hospitals in larger cities across Canada since 1986.

The flights are free for clients, Hope Air’s expenses and efforts covered through fundraising and its volunteer pilots, Hope Air operating out of a Toronto head office with just a small paid staff.

A group of Hope Air pilots and patients/clients greeted each other at the Sault Ste. Marie Airport Thursday morning, as Hope Air pilots are currently flying across northern Ontario and Quebec Sept. 30 to Oct. 4 to raise awareness and funds for Hope Air in a flying fundraiser named Give Hope Wings.

The Sault’s Shawna Atkinson, a mother of three, has been travelling with Hope Air from the Sault to Toronto for appointments at St. Michael’s Hospital for several years, having suffered from chronic sinusitis.

“11 years ago, I got really sick. I had a lump on my forehead all of a sudden. At eight months pregnant with my youngest son, I was at home and all of a sudden got really sick...my face got swollen. I had a severe sinus infection that went right to my brain. They rushed me to Toronto where I had a 13-hour operation, all this while eight months pregnant,” Atkinson told SooToday.

“The infection ate through my sinus cavity and went to my brain. I was in hospital for quite a few months. My son was born in August of 2009 prematurely but he’s perfectly healthy.”

Atkinson was rushed to Toronto for that first traumatic surgery by regular air ambulance, but has travelled with Hope Air to St. Michael’s for numerous subsequent surgeries and checkups.

“A lot of times I didn’t know how I was going to get there. I didn’t have a vehicle that was reliable. Neither did my family. Someone recommended Hope Air and it went from there. Now, we usually use the service in the winter because winter up north isn’t always nice, but in the summer we drive to save Hope Air for the ones more in need,” Atkinson said.

Despite all her suffering, Atkinson’s love for life goes on.

“I have to look at the positive. I’m still here and I’m too stubborn to go anywhere,” she chuckled.

“I’ve already been through cancer as well. What doesn’t kill you makes you stronger.”

“The pilots are very sociable, very easy going. I have a background in mechanical engineering, so I was very inquisitive of the planes. One of the pilots was very willing to answer any questions I had and he even let me steer the plane a little bit.”

“It was pretty cool. My mother was having kittens in the back seat of the plane but I was enjoying it,” Atkinson said with a good-natured laugh.

Atkinson told us she has recommended Hope Air to others, such as patients with heart issues faced with exhausting drives to hospitals in other cities.

As for Thursday’s fundraising and awareness event, Atkinson said she wanted to be at the Sault Airport to support Hope Air.

“I want to help them. They’ve helped me and this is the least I can do for them. I can definitely donate my time and my story. They're so valuable, especially for people up north.”

Hope Air pilot Brian Huston was on hand at the Sault Airport Thursday.

Now an Oakville resident, his plane based in Burlington, Huston was raised in small mining communities in northern Ontario, northern Quebec, Labrador and Saskatchewan, and therefore knows first hand the remoteness of such areas and their distance from the advanced medical care many people need in faraway larger cities.

Realizing that need and with a desire to help, Huston, first serving as a fundraiser in 2016, then stepped up to the plate with his four seat Cessna 182 plane in 2017 and has flown several missions for Hope Air, transporting patients from remote areas in Ontario to big city hospitals for the surgery, treatments and checkups they need.

Huston originally took up flying as a hobby in 1986, but after retiring from the mining industry in 2016 he earned his commercial pilots license and became a flight instructor.

As a Hope Air volunteer pilot, the Atikokan-born Huston has flown clients from the Sault to southern Ontario on four occasions, twice to Toronto, twice to London.

“Typically there’s a patient and an escort, one of them will be in the front and another in the back,” Huston said.

During a flight, Huston said there is often an opportunity for both pilot and patient to bond.

Some are a little quieter than others, others more willing to engage in conversation and share their stories.

“I flew a father and daughter (not from the Sault), and the father told me before he found out about Hope Air he had virtually bankrupted himself transporting his daughter to medical care, so he was so relieved to have found an organization like ours,” Huston said.

On one occasion, Huston flew a young boy and his mother from treatment in London back home to the Sault.

“The first thing I noticed about this young man was his smile, but the second was the permanent breathing device he had in his trachea. I never know what the medical issues are unless the patients want to share. They’re not required to share with me. I just know that they need help.”

Granting the boy’s wish to ride up front, his mother in the back, Huston started his pre-flight check list, the boy stating “when you need my help, you let me know,” Huston happily recalled.

“I told him ‘you’re my first officer. You’re responsible for the passenger so you’re going to have to check the back seat every once in a while. I kind of regretted that later because his mother was really tired and he woke his mother up every 15 minutes on the way up to Sault Ste. Marie just to see if she was okay,” Huston chuckled.

After a smooth approach and landing at the Sault Ste. Marie Airport, during which Huston allowed the boy to hold (not control) the control column on the passenger’s side, the boy observed a Sault College aviation program plane coming in to land.

Huston asked the boy what he thought of the aviation student’s landing, the youngster remarking ‘that was a pretty good landing, but mine was smoother.’

“His mother and I burst out laughing,” Huston said.

“For me, when I was on my way home, I was thinking whatever else was going on in this child’s life, whatever else was involved in his medical visit, for a brief period of time I was able to make him forget that and really enjoy himself and have a bit of an adventure.”

“That's why I do it. That’s it in a nutshell,” Huston said, adding he remembers every patient.

To raise funds and awareness for Hope Air, its pilots who are participating in Give Hope Wings flew out from Burlington Wednesday, arrived in the Sault Thursday, planning to visit Timmins and Sudbury with a flight over Trois-Rivieres, Quebec and the Saguenay River also on their schedule.

This particular third annual Give Hope Wings expedition hopes to raise $100,000 to provide 400 flights to help people who must travel far away from their home communities.

Since its beginning in 1986, Hope Air has provided more than 150,000 travel arrangements for patients, regardless of age or medical need.

“The pilots are hobby pilots using a relatively unique skill set and their personal airplanes to volunteer their time and airplane to help people out,” Huston said.

A potential client will contact Hope Air’s Toronto head office and go through all the preliminaries. The office will then post a mission via email to all of its volunteer pilots and ask who’s available.

“There’s generally a few days notice. It is important to recognize we’re not necessarily an emergency service. We’re using private aircraft as non-medical professionals, so we don’t handle the real emergency stuff like an air ambulance would handle. These are cases where the patient is ambulatory, able to get in and out of the aircraft on their own.”

“When I found out about the organization, I decided that was what I wanted to dedicate my time to, to helping people out who, just simply on the basis of geography, could not get to a doctor,” Huston said.

“The north is a huge, huge place and distance is a significant issue, as are finances. The way I like to describe it for people is what we’re trying to bridge in Canada, as a charity, is the difference between a universal healthcare system and universal access to that healthcare system.”

More information on Hope Air, including how to donate, may be found on the organization's website