Volunteers: Couple says 'Don't wait, help while you can'

Devoted husband and wife share their talents and compassion at local hospice
Jun 24, 2016 9:39 AM By: Darren Taylor 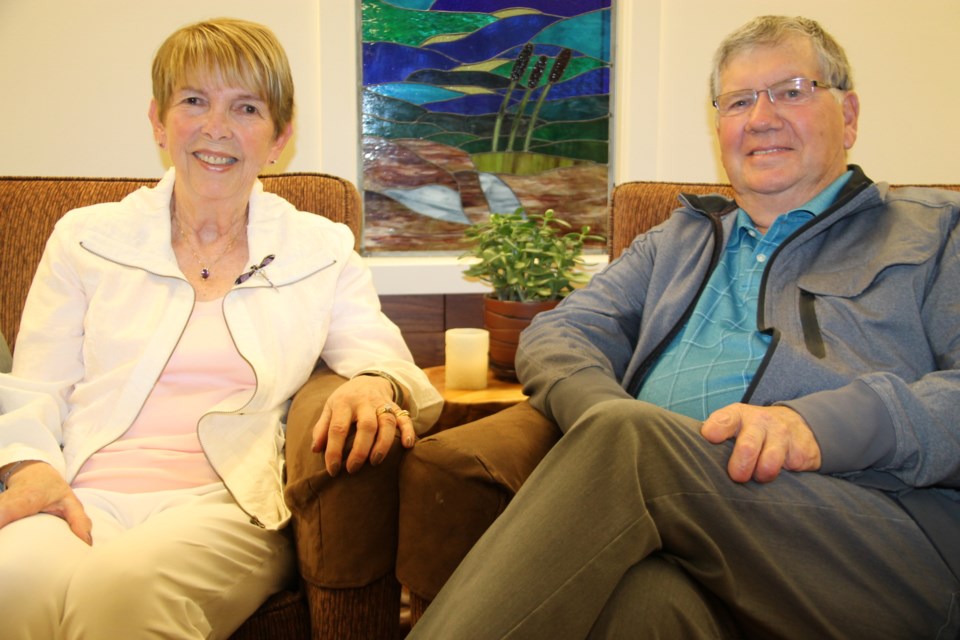 When the Sault's Ron and Helene Caron both retired in 1996, the devoted couple had even more time to spend together.

The Carons enjoyed working in their garden, renovating and decorating their home, travelling and playing golf.

After Ron's sister passed away at a hospice in Montreal, the two decided to add volunteering at Algoma Residential Community Hospice (ARCH) to their list of "together" activities.

The Carons are now in their fifth year as ARCH volunteers.

"My brother was here for about six weeks and they found someone who played the blues, he loved the blues, and he planned on coming in to play for my brother on the day he died…it never took place but that's the type of people they are (at ARCH), they never refuse anything to anyone if they can do it," Ron said.

"It's quieter here than at a hospital, and it's not as clinical as a hospital…the families talk and laugh together, it's like a home," said Helene.

Ron, a native of Rouyn-Noranda, Quebec and Algoma Steel retiree, is an ARCH handyman.

Helene, a Sudbury native and retired schoolteacher, volunteers as an ARCH receptionist and telephonist and helps out with administrative work.

Sitting with Helene in a quiet space at ARCH, Ron pointed to the walls he repaired and repainted at staff's request.

"That's really something because Ron doesn't want to paint at home, he'll get somebody else to paint, but here he loves to do it," Helene smiled.

"Whatever they want me to do, any project, I'll do it," Ron said.

"Somebody had damaged their garbage container which you see when you drive in, it was vandalized and it would have cost an arm and a leg to rebuild it, about $5,000, so I helped fix it instead."

"He's a jack of all trades for ARCH, if he has a project to do here he won't leave it until he's done," Helene said.

"I'll talk to the residents, they'll come to my desk, sometimes they just want to talk and I'll listen…I'm a listener, if they come talk to me I listen and whatever they tell me, it stays here," Helene said.

"One day I went into the family room and someone was crying and I said 'if you need anything I'm at the desk.'"

"It's not big things, it's little things, and when you leave here you feel better for helping people," Helene said.

Helene shared the memory of a bittersweet moment when one of her former students, who had become an ARCH resident, recognized her from her school days and approached her.

"I enjoyed talking to her and visiting her, and after my shift I would go say hi to her again," Helene said, adding it was sadly ironic the woman's father also was an ARCH resident at the same time.

"We've received so much through the years, it's nice to be able to give back a little bit while we can…don't wait, help while you can," Ron said.

"Volunteer work is rewarding, really rewarding, and here the staff is so grateful for everything you do."

"Our youngest son is in the Sault and he said 'when you can't do it any more I'll take over,'" Ron said.

"One day we might be here (at ARCH) and we will need that help, and we hope there will be people that'll be available to take over our volunteer jobs," Helene said.

"Volunteering also reduces your own stress…you help other people and you forget your stress."

In addition, the work of the Carons and all ARCH volunteers save the facility a great deal of money.

"Having a receptionist and a painter saves them money…and there are many, many other people who do jobs here, like people who cook and help out in the office," Helene said.

It takes a special type of person to be employed or volunteer at a place where death is a constant.

"We know why they're here (the residents), and at first we both thought it would bother us a lot, but no it doesn't," Ron said.

"We know it's part of life…sometimes a tear falls," Helene said.

"We're glad to see the residents when you come back for the next shift, and if they're no longer here, we think about them…but you try to do as much as you can while they're here."

"I think coming here and sharing the residents' experiences will help us when our turn comes," Helene said.