Ryan Rizzo is travelling across the country, documenting less-populated areas, and is on the front line of conservation drone photography
Aug 29, 2017 8:00 AM By: Jeff Klassen
Previous Next
1 / 1 An aerial drone photo of the Canada C3 ship as it travels around an iceberg in the Canadian arctic. Sault-raised Ryan Rizzo of Poesis Media Syndicate has been doing drone photography of Canada's Northwest Passage while on a cross-Canada journey with the expedition Canada C3. Image Supplied
Expand
Previous Next

Rizzo is a participant in the Canada C3 expedition, a 150-day journey that started this spring out of Toronto.

From there, the expedition went down the St. Lawrence River, around the east coast, is currently going through the arctic, and will finish in Victoria, B.C.

It is currently on Leg 9 of the journey, travelling mostly through Canadian Arctic waters from Pond Inlet to Cambridge Bay. 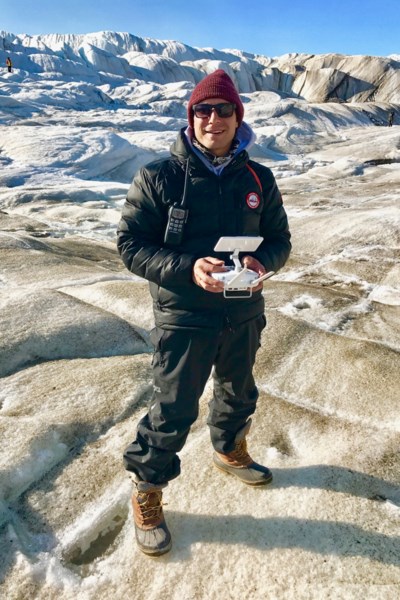 Ryan Rizzo has been doing drone photography of Canada's Northwest Passage while on a cross-Canada journey with the expedition Canada C3. Image Supplied

Rizzo joined the C3 expedition to take aerial photos and videos and is accompanying them on 88 per cent of their journey.

Throughout the voyage, he’s been imaging landscapes, icebergs, polar bears, whales, a variety of islands, and melting glaciers.

He said his work is on the front-lines, helping clear up what is currently a hazily regulated area of conservation drone photography and obtained a cross-Canada Special Flight Operators Certificate (SFOC).

He hopes to help establish a precedent for how conservation drone photography permissions and procedures are handled in our country.

“We try to keep a pace or distance — to study animals in natural environment without being obtrusive,” said Rizzo. “We can fly close, but we try to keep a 150-meter distance with animals, rather than be intrusive.”

He said it’s hard to describe, but drones offer such a unique perspective on photographing the environment.

“(We’re flying the drone at) five or six meters and looking down to the depths of the glaciers to the point you can see the light blues, and the water dripping. It’s intense,” he said. ‘We’re kind of in this sweet spot. When you’re on the ground, you can only get (the shot) horizontally. If you get an airplane or helicopter, you’re kind of restricted to being above the 400-foot ceiling that transport Canada (regulates) — we can go there. We can fly into crannies and nooks that typically airplanes and expedition photographers can’t get into …and in a much a safer way.”

When it comes to photographing animals, discipline is required.

“Like with polar bears, we can fly right up to them if we want — they can’t touch us — but we don’t. We respect their space and environment.”

Rizzo has been into drone imaging for five years now and, in a relatively new industry, that makes him a seasoned pro.

Even at the professional level, he’s using the same DJI prosumer drones that your neighbour might have.

But although drones are more affordable, regulations are stricter.

“The industry has really shaved off the super excited people who went out and bought drones, the rules are pretty stiff and the fines are pretty high if you don’t do it right.”

The C3 expedition is a Canada 150 Signature Project with a stated purpose to "inspire a deeper understanding of our land, our peoples and our country."

Aboard the vessel are "scientists, artists, Indigenous elders, historians, community leaders, youth, journalists and educators" and the ship is visiting communities of all types across Canada to get a better understanding of the country's makeup.

On Thursday, the expedition stopped in Gjoe Haven, Nvt. meeting with a largely Aboriginal population.

“It’s breathtaking. They have such an amazing life style up here. It’s a wageless culture, they are traditionally living off the land.”

During the journey, Rizzo has learned about reconciliation between Canada and First Nations people.

“It’s very eye-opening – (before) I just didn’t understand the intensity of the residential schools and relocation programs. I’m much more aware now,” he said. “I think it’s important to start the conversation of reconciliation. There’s been some issues over the past 150 years and in order to avoid them in the future, we have to have those discussions… It’s definitely a message I want to carry back to smaller communities like the Sault.”