"I've had an interesting life" 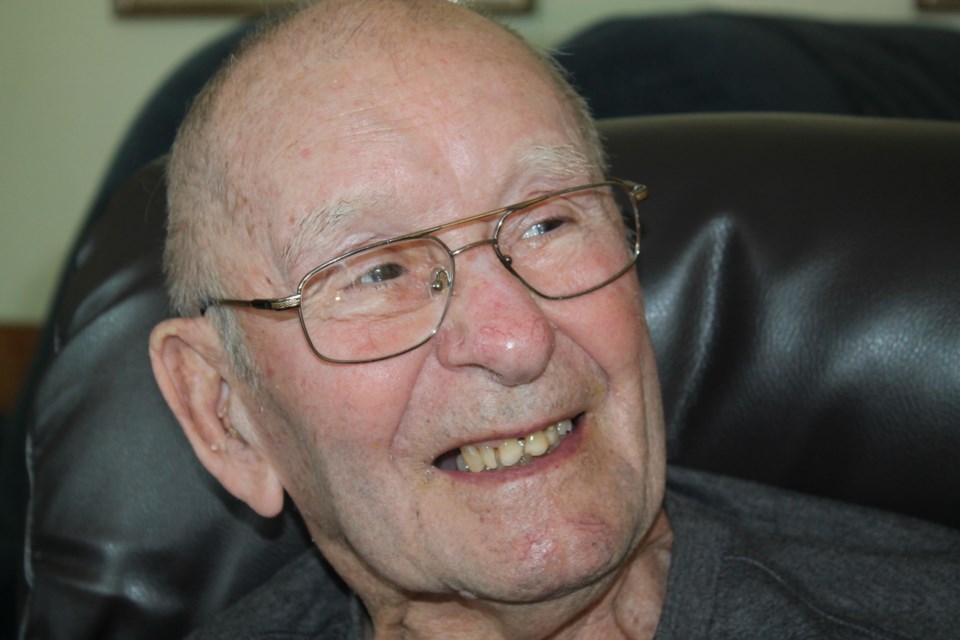 Many of us are familiar with the historic images of Marilyn Monroe visiting U.S. troops in Korea in the 1950s.

In fact, Christie, now 90, surprised the American actress with an unexpected kiss.

Stanwyck paid a visit to the navy base where Christie was stationed to encourage sailors to buy war bonds.

The sailor who contributed the most money to the war bond drive was promised the opportunity to meet Stanwyck in person when she came to visit the base.

But a mischievous Christie met Stanwyck up close before anyone else on the base did.

"I jumped from a second floor window into the back of her convertible where she was sitting," Christie told SooToday at his east end home, surrounded by family members.

"I kissed her and it didn't cost me anything," Christie laughed.

Christie said he spent a night in the brig (military jail) for the prank.

Christie's nephew Dave said Harvey was acting on a bet made with some of his fellow sailors.

"Oh sure, I came right out of the sky into her lap," Christie said, again with a laugh.

Born and raised in Sault Ste. Marie, Christie joined the Royal Canadian Navy in 1942 while under age at 16.

"I got my birth certificate forged over the river (in Sault, Michigan)."

"I knew they weren't going to shoot me, the navy needed me (for the war effort)."

Christie quit high school after a quarrel with a tyrannical music teacher and went to work at Algoma Steel.

His time at the plant was short.

Christie left Algoma Steel shocked after a co-worker was killed in a workplace accident.

It was thereafter he decided to join the navy out of a sense of adventure.

"I came home from work and I told my Dad 'I'm going to join the navy.'"

Christie joined the navy and became a trained radio operator aboard HMCS Norsyd, a corvette which served as a convoy escort ship on the North Atlantic.

Justifiably proud of his wartime service, Christie, to this day, is nevertheless uncomfortable with being in small rooms.

As a ship's radio operator, he was segregated from the rest of the crew in a small room while on duty.

Sending out coded messages from the ship, the ship's navigator would hand slips of important information through a slot to Christie during his shift.

While heading back to Canada after a convoy run, HMCS Norsyd was accidentally struck hard in her side by a hospital ship carrying wounded veterans 300 miles west of Ireland.

While 300 miles away from New York, another Royal Canadian Navy ship, none other than HMCS Sault Ste. Marie, came to the Norsyd's rescue.

Divers from HMCS Sault Ste. Marie tied cables to the Norsyd, and the two vessels sailed side-by-side to Halifax.

After the war, Christie returned home to Sault Ste. Marie and worked for well over 40 years as a maintenance worker with the city's bus fleet, specializing in body work.

"Because of the quality of Harvey's work, the city of Sault Ste. Marie actually took in buses from different parts of Northern Ontario and did repairs, both from accidents the buses were in, and as well, some of these buses would be corroded and he would take the diesel engines out of them and rebuild the floor, or totally rebuild the front ends of them," said Harvey's nephew Dave.

Some of the bus reconstruction jobs would take months.

One of the many bus repair jobs which stands out in Christie's memory has, like his kissing of Barbara Stanwyck, a celebrity aspect to it.

During one of his many tours, Bruce Springsteen had his tour bus fixed in the Sault by Christie.

"After a concert in Detroit, his bus manufacturer heard he was capable of doing the repair work, so he sent him up here to get it done," said Dave Christie.

"It wasn't a big job," Harvey said, adding he and his co-workers supplied Springsteen and his band with fishing rods to keep them amused.

The band slept on the tour bus at night and fished near the rapids during the day while the two-day repair job went on.

"One thing I've found outstanding about Harvey is he has no sense of fear whatsoever, of man or beast, he faces everything head-on," said his wife Dorothy.

"Harvey spent little of his pay during the war and he would do things to make money, they were given a ration of rum in the navy but he would sell his, he would buy things like razors from vendors at the ports he visited and sell them to the other guys," nephew Dave said.

Through his money-making efforts, Christie was able to buy a new house for $5,400 on Kitchener Road upon his return to the Sault after the war.

Fearless, gifted, entrepreneurial and humorous, Christie described himself to SooToday as "a rebel."

However, "he's never been a rebel with me," smiled his wife Dorothy.