How a local photographer received 'The Spirit of God' (4 photos)

Around 15 years ago nature photographer Gordon Stone was waiting for just the right lighting conditions at Bellevue Park.

He had been waiting for weeks until, one day, when the fog and lighting conditions were just right, he hopped into his van with his camera and headed down to the park to see what he could get.

“If you know the park, you know the little bridge that goes beside the duck pond,” said the Stone, describing that day. “I started to take that step (to go in that direction) and something said to me ‘No Gordon, walk behind the duck pond and see what I have for you.’”

Stone changed his path and soon after he was confronted with bright streaks of light filtered through fog and trees casting long shadows on park floor.

It was then that his photo Touched by the Spirit of God was created.

Stone believes the image is spiritual, and that it depicts Christ on the Cross.

“If you look at it, there’s two arms. Some people can actually see the spear that was in his side,” said Stone.

Stone said he didn’t ‘take’ the picture, he received it.

The act of ‘receiving’ photos is part of a spiritual photo-making process that he says he’s tuned into  — he uses his intuition and hidden senses as much as possible to guide him.

“I don’t believe that I take anything. I received an image. It’s hard to get people to understand. Well, I do it to — I still talk about taking pictures (but) it’s actually a sense of feeling,” he said. “I just did what I was told… It’s a feeling that there is something I need to see.”

Stone has spoken about his image making process at events and tries to inspire others with his technique. 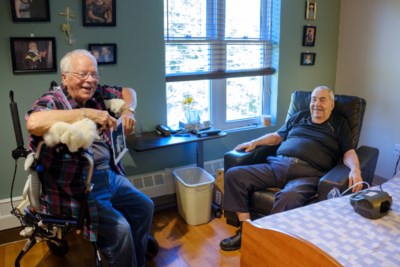 Gordon Stone (left) has been sharing his image with others at Extendicare Maple View. When Tony Fioramanti's (right) wife passed away recently, Stone gave him a card. Jeff Klassen/SooToday

“Go out and listen and you will receive the image. We all have difficulty doing that because we want to say ‘I took it’," said Stone.

Stone, now 81, has presented Touched by the spirit of God at local art shows and sent it to friends and family around the world.

One thing the photographer is glad about is that before she passed away the couple had stained glass interpretation of the photograph made and dedicated to their parish, the Emmanuel United Church.

Stone lives at Extendicare Maple View these days where his work continues to lift up people's spirits.

He had the image printed on to a card with a poem that he wrote on it.

Stone gives it to families who have had a loved one pass away, or neighbours who just need cheering up.