A dad’s obsession with old Chevy’s first spread to his sons and now his grandsons.

Gino Lepore, 65, said he used to be a well-known racer in the Sault with his 1969 Dodge Dart Swinger infamously nicked named ’340 plus tax’ — ‘340’  in reference to the motor size and the ‘tax’ in reference to his car's special extra oomph.

“For some reason or other, it was pretty unbeatable in the Sault,” said Lepore. “I used to race a bunch of different cars and no one could beat that 340.”

Then one day he got beat by a big block engine 1969 Chevrolet Camaro and he’s been a Chevy fanatic and muscle car collector ever since.

At one point he had a one of 50, ultra-rare, 1969 COPO — apparently they now go for a quarter million dollars but he sold his in the early 1980s for much less.

Lepore had three boys – Jeff, Matthew, and Josh — and growing up they would help him out as he fixed vehicles and eventually cars just sort of caught on.

“(The family obsession) built from there. He helped me, then I helped him, and we started going to swap meets and car shows together,” said Matthew.

Eventually Josh and Jeff got into it and even more recently Matthew’s son Logan, 3, is getting into the old Chevys. 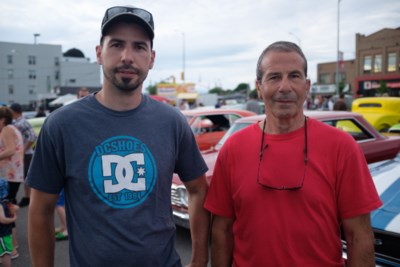 (From left) Matthew Lepore and his father Gino Lepore at the 2017 Queen Street Cruise on Friday. Jeff Klassen/SooToday

Matthew gave his 3-year-old a 1963 Chevrolet II Nova and the boy is very protective of it.

“He calls it ‘the red car’ and that’s his baby. If anyone tries to get close to it drive it he freaks. No one can drive it but me or my dad,” said Matthew.

The next Chevy, said Matthew, will be one for his  two-year-old son Marcus.

Matthew said he thinks it’s great that the family can come together with a fun pastime that now runs through three generations of Lepores.

“My dad was always an inspirational leader. He always took the time to teach us and show us things. From him teaching me, now I’m teaching my sons, " said Matthew. "It's going full circle... now Im helping my dad which is kind of a nice thing because he helped me when I was a kid,” said Matthew.

“Happy Father’s Day to all the fathers out there especially the ones with the old muscle cars,” he said.