Amanda and Heather plan a second consecutive visit to Sault Area Hospital with gifts for sick children
May 31, 2016 11:22 AM By: Darren Taylor 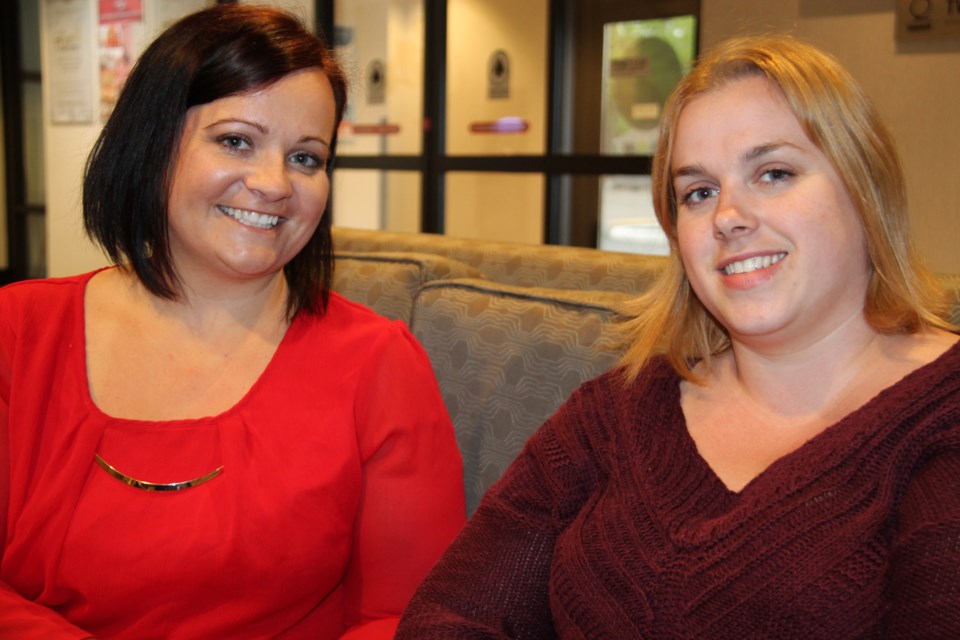 Amanda Johnston and Heather Hilderley-Phillips are already planning to make Christmas 2016 a merrier one for sick children and their families. Darren Taylor/SooToday

Amanda Johnston and Heather Hilderley-Phillips are two great Sault Ste. Marie moms who are already planning to make Christmas 2016 a happier one for hospitalized sick children who won't be able to be home with their families.

And, they want to give a helping hand to parents who will be spending every possible hour at hospital, waiting and watching over seriously ill, newborn babies.

For the two women, who have known each other since their elementary school days, it will be the second consecutive year they have cheered sick children and their parents at Sault Area Hospital's neonatal intensive care unit (NICU) and paediatric unit.

In 2015, Amanda and Heather raised approximately $1,800 through a silent auction and, with that money, purchased toys for sick children in the paediatric unit, and gift cards for parents with sick babies in NICU.

The two, along with Amanda's daughter Brooke and Santa Claus, delivered the goods to Sault Area Hospital themselves.

"It touched us to see the kids smile," Amanda told SooToday.

"One of the Moms said to us 'You just made my day,' it was touching to know that."

Amanda and Heather can relate to what it is like to worry over sick children.

Amanda's daughter Brooke was born at 25 weeks in November 2008 and weighed one pound, 13 ounces.

"She was born in the Sault but she was sent to London so we were down there for five months before we could come home to the NICU at Sault Area Hospital for another month, so we spent six months in NICU, part of it over Christmas."

Brooke, now seven, has had vision and hearing problems, plus surgeries on her throat and heart.

"We see doctors pretty much every six months in the Sault, and just recently, this year, we finally got the 'okay' from the doctors in London for us to stay in the Sault for appointments," Amanda said.

"We brought her to Sault Area Hospital and they did every kind of test they could do."

"They sent us to Children's Hospital of Eastern Ontario (CHEO) in Ottawa and we were there for a couple of weeks…it turned out to be some sort of infection, but it was scary as a parent to see your child going through that."

"When she was 18 months old she had a really bad cold and couldn't get enough oxygen…they diagnosed her with asthma."

After needing quarterly checkups, Penelope now needs checkups every six months, and, Heather said, "she seems to be growing out of it, which is a blessing."

"I know what it feels like," Amanda said, her eyes welling up with tears.

"I know what it feels like to be in there (NICU), you might be in there alone, or you might have family coming in and out to visit but you don't want to leave your baby, you want to be there all the time."

"I want to show other people I've been in their shoes, that I know how they're feeling, but also lift some of their burden, even if it's only giving a 25 dollar gift card for gas for the parents, it's still something that shows someone else cares."

"We've been there, we know what it feels like…you want to give back if you're in a position to give back, because some people can't, and they need help the most," Heather said, also getting teary-eyed.

"We hope to brighten someone's day, for a parent who has received bad test results about their child or still waiting for test results…it's a very emotional time," Heather said.

"When I was in NICU in London there was a Mom who had been in NICU a couple of months before me and she was from London, but she realized the financial burden you go through (being away from work and paying for food, accommodation and other expenses while a loved one is in hospital), so she created an event and raised money and bought items for the families with children in NICU," Amanda said.

"We were one of the first families to get something, I opened this box and I bawled my eyes out because I was so touched that someone else was thinking about the things we were going through."

"We got $700 in gift cards for gas, groceries, baby items," said Amanda, who stayed with her husband at Ronald McDonald House while baby Brooke was in hospital in London.

After last year's good deed for sick children and their families, Amanda and Heather have started organizing earlier this year after they learned how much planning goes into silent auctions.

"We've secured the venue (the Quattro Hotel and Conference Centre ballroom), we've designed our floor plan for the silent auction, we had 55 tables available and we have about 16 tables remaining," Heather said.

Amanda and Heather's visit to the Sault Area Hospital NICU and paediatric unit will take place on a day as close as possible to Christmas (last year's visit took place December 23).

"We have a lot of artists participating this year (donating materials to the silent auction), from native art to abstract art, oils, acrylics and watercolours, some people have made jewellery, and we want to have a separate gift card section at the auction," Heather said.

Last year, photographers, spas, dry cleaners, office suppliers, car rental companies and other businesses offered goods and services to bid on, and the two Moms are hoping for the same this year.

After the auction, "we can go and shop!" Amanda said enthusiastically.

"It was a very quick, easy decision for us to do this again."

Vendor tables for this year's silent auction are going fast, and vendors wishing to get involved in the silent auction to help Amanda and Heather cheer sick children and their families at Christmas can contact them by email at onestopchristmasshow@outlook.com.

This teacher made a mask for every single student at Parkland Public School
Sep 19, 2020 3:45 PM