A special space for a beloved music teacher

Julia Greco, known as Sister Immaculata, has been honoured by the Algoma Conservatory of Music for decades of work as a piano teacher
0
Dec 14, 2016 8:51 PM By: Darren Taylor 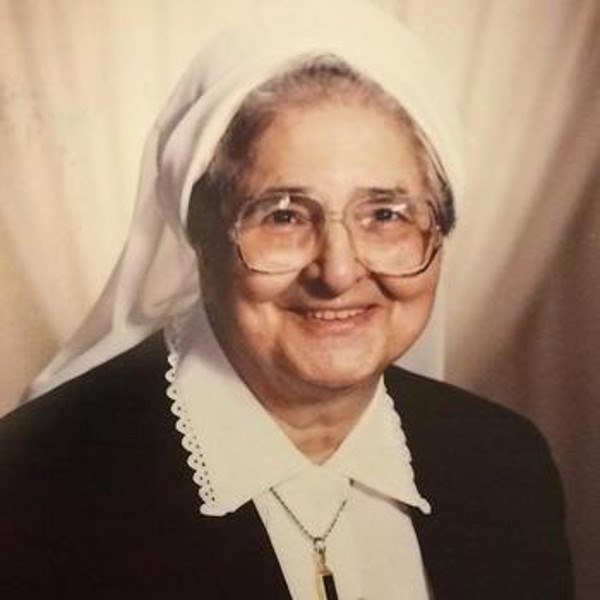 Sault native Julia Greco, known as Sister Immaculata, has been honoured by the Algoma Conservatory of Music. Photo by Kevanna, supplied by Vin and Sue Greco.

The Algoma Conservatory of Music, now situated in Mill Square, has dedicated a piano classroom in honour of Greco, a member of the Sisters of St. Joseph of Sault Ste. Marie who is officially known within the Roman Catholic Church community as Sister Immaculata.

Greco, who worked as a piano teacher for many decades throughout northern Ontario, celebrated her 96th birthday Dec. 7 and is also marking her 75th year with the Sisters of St. Joseph.

She now lives in retirement in the Motherhouse at the Sisters of St. Joseph of Sault Ste. Marie facility in North Bay.

A ceremony marking the dedication of the Sister Immaculata Room was held at the Conservatory Dec. 4, attended by family and friends, with Greco watching by Skype from North Bay.

“She’s a remarkable human being,” said Dr. Robert Ollikkala, a music professor who teaches with both the Conservatory and Algoma University’s music program.

As a child and teen, Ollikkala, now 66, received piano instruction from Greco at the Avila Centre (affiliated with Lakehead University) in Thunder Bay.

“She has done everything for the good of her students.  There’s virtually no ego involved in any of her decisions.  She’s unique that way among the people that I’ve met,” Ollikkala told SooToday.

“It (the dedication ceremony) was surprisingly touching for me, I hadn’t expected to be affected that way but Guy (Traficante, Conservatory principal) asked me to speak a little bit and I kind of got choked up reminiscing.”

“I wrote a book a few years ago (a self-published autobiography entitled Music’s Life Lessons) and she’s in there, so I read a passage that discusses her role in my life, and when I was reading that I got teary-eyed,” Ollikkala said.

“She represents something pure and ideal that you don’t get elsewhere, it’s a rare thing that she is.”

“She has qualities that are very hard to find these days.  Most of us are busy dealing with our own egos and she basically takes all that off the table and does what’s best for the people around her.”

“As a teacher, she had a vast knowledge of classical music and she knew how to communicate that.”

“Of all the people I’ve studied from, and there have been a lot, she stands as the purest example of giving through music,” Ollikkala said.

Born in 1920, she is the daughter of Vincent and Bridget Greco.

The Sault’s V.E. Greco Pool is named after her father, who ran a James Street grocery store and fed many in the city’s west end during the Great Depression.

The Sault’s Vin Greco and his wife Sue also spoke to SooToday about Julia and the honour she has received from the Conservatory.

“She accepts everyone and everything, you never hear her making any judgements about people,” Vin said.

“The dedication of this room, we thought it would be the perfect way to acknowledge her…we wanted to have this dedication now while she was able to enjoy it and share it with her,” said Vin, who estimated she has taught hundreds, perhaps thousands, of piano students over the years.

“She has embraced and loved all the people who have married into the family, warm and loving and kind to all of us,” said Sue, who refers to her as Auntie Julia.

Vin recalled Conservatory principal Guy Traficante, speaking at the dedication ceremony, said “we knew she could inspire anybody.”

For that reason, Vin said his aunt taught some of the best (and some of the more difficult) Conservatory students.

“In music, when there were difficult things that needed to be taught to students, they would ask her because her expertise and her patience were just amazing,” Sue said.

“She taught a lot of our family members piano, and that legacy is now continuing with great-nieces and great-nephews now taking music at the Conservatory.”

“Her great-niece played the recorder for Auntie Julia when we were Skyping  to North Bay…Auntie Julia was able to see the whole dedication of the room, the speeches, and when we were singing Happy Birthday to her,” Sue said.

Vin said his aunt encouraged the Conservatory faculty to relocate to its current, new home at Mill Square when there were a lot of naysayers.

And, by the way, there’s something else we should know about Julia Greco.

“She has a great appetite, she loves Italian food,” Vin chuckled.