Hockey and car manufacturing come together, with the help of a Sault native

Sault Ste. Marie native Paul Boyer got the call when General Motors was in need of some help to continue the production of facemasks at one of their Michigan-based facilities
May 15, 2020 8:00 AM By: Brad Coccimiglio 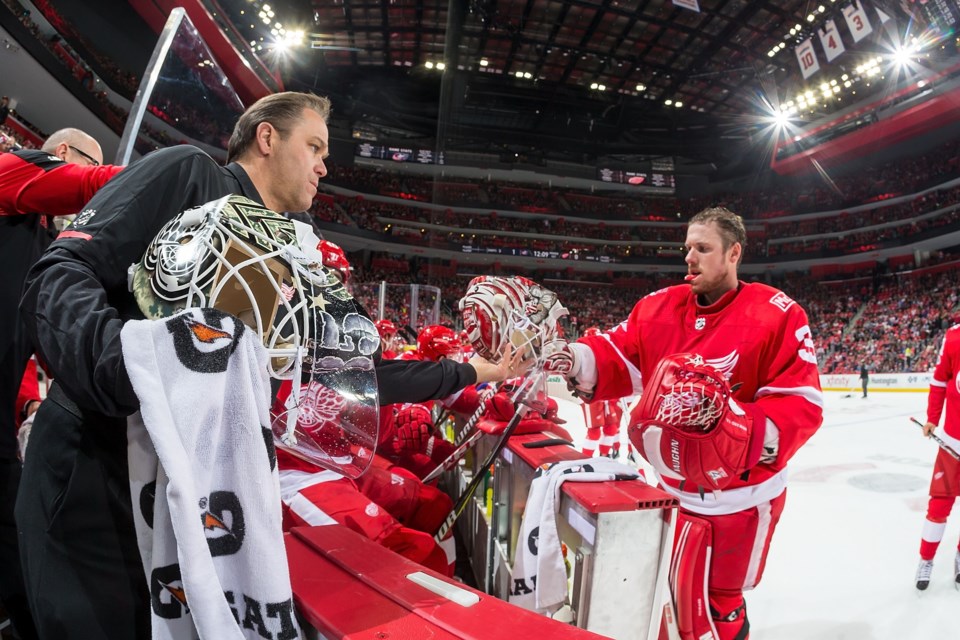 A prior relationship turned into an opportunity to help out during the COVID-19 pandemic for a car manufacturer and a hockey team.

The company ran into the problem of needing more disinfecting machines to sanitize the masks before they were distributed to hospitals and other businesses in Michigan that needed them and that’s where the NHL’s Detroit Red Wings came in.

Boyer got involved after a call from Red Wings CEO Chris Illitch in March shortly after the NHL decided to pause its season because of the COVID-19 pandemic.

“He explained to me what General Motors was doing and what they were working on and they needed some sort of sanitizing process at the end of the assembly line of these masks,” Boyer said. “They couldn’t come up with any machines. They had actually purchased one from Fresh Gear, which is a Canadian company based out of Toronto. They got the last one there.”

Thanks to a prior relationship between the Red Wings and GM from a sponsorship standpoint along with Illitch’s friendship with GM president Mark Reuss, the company checked with the team to see if they could help out.

The Red Wings don’t use the sanitizing machines at their home rink, Little Caesars Arena, as the sanitizing technology is built into the HVAC system, but Boyer knew another way to help out.

The Chicago Blackhawks and Philadelphia Flyers also provided machines. Boyer said he also spoke with other teams but the issue of access to arenas meant those teams could help out.

“I said to (the teams), the minute you need these things back, I’ll get it back to you,” GM executive director of manufacturing Rob Portugaise in an interview with ABC News. “But so far, that hasn’t come up. Hockey has a reputation for this, right? For being close-knit and helping out the community. To be able to witness it firsthand was really exciting. It was all done very quickly. The only thing they asked for was a shipping address.”

When asked about the willingness of teams to help out, Boyer said “that’s just how we are.”

“We’re a group of friends, so I reached out to my friends to see if they could help. We would do anything for each other,” Boyer said..” We deal with each other, we’re close to each other when we travel. We go into each others buildings  and there are things that we forget or things that we need or players have an odd request so you go check with the home team and if they can help, they help. That’s how it works. We’re a tight knit group. That’s the best way to put it.”

Boyer called the opportunity to help out “very fulfilling.”

“At the time, I don’t think it had peaked yet. We really didn’t know. We were in that phase of ‘Oh, this will be a two-week thing and we’ll be right back to work’ at that time,” Boyer said. “Other people like General Motors saw the need and the urgency for it and they forecast a little further ahead and saw that there would be a great demand for PPE and this was how they could help out. It was fulfilling but that’s just the job that equipment guys do. We take care of things. We take care of people and we take care of things.”

The uncertainty of if and when the NHL will return to action makes things a little difficult for  Boyer and the Red Wings.

“We’re at a fork in the road,” Boyer said of the potential of a return and how he is approaching it. “If we play, I’ve got to go one way and if we don’t play, I’ve got to go another way. I’m ready to play. We shut it off and I had inventory built in and I knew I could finish our last 11 games with that I had. It’s funny. I ordered sticks well before the Chinese New Year and they still haven’t shipped yet. I just got the first ones the other day. They’re slow over there and they’re not shipping. They’re made in China and they’re slow to reopen over there. Throughout the first week, you just kind of stop and we had a staff meeting. We knew we all had to be ready but take that next step.”

“If we don’t play, I’ll call the vendors or send in the orders to get ready for (whenever) we start,” Boyer also said. “It all depends (on the league decision). I’m at a fork in the road right now like everybody.”

With the NHL season still up in the air, Boyer spoke of the potential changes the he could expect on returning to the rink.

“I think there will be less contact,” Boyer said. “The norm is to have a sales person come into the rink and talk to a player and ask ‘Do you need a pattern change?’ Or ‘Does the boot fit?’ That might have to be done virtually. I’ll have to interact more between player and manufacturer’s rep for sure. I like to bring the rep in because they know their product better than me and there are little things that they can do to make the skate fit better, to make the stick perform better or to make the glove protect better. I think I’ll have to be a little more involved now as we come back for the first little while until we can get this all figured out.”

Boyer joined the Red Wings in 1994 after one season with the New Jersey Devils and has been part of four Stanley Cup champions and also served as the equipment manager for Team Canada at the World Hockey Championship on a pair of occasions. The team won silver both times.

The job has changed over the years, but one of the biggest changes has been the administrative side.

“I was told a couple of years into it by Red Batty, he was the (Green Bay) Packers equipment manager, he was telling a group of us in hockey that we would become less hands on and more administrative and he was right,” Boyer said. “He saw the evolution through football, and it’s been like that. The purchasing end of it. The budgeting end of it. Just the administrative part of it is a little more detailed than when I started. There are more people on staff than when I started for every team. It’s just how it is and the evolution. And it’s not just hockey. It’s happened in every sport.”

What does he enjoy most about the job?

“Definitely the people,” Boyer said. “The people that you work with every day. The players that come through. All of the guys I’m met. All are great guys. People you meet on other teams. The people that you interact with. I’ve been lucky enough to work two World Championships for Team Canada and those people are great, Hockey Canada is a great organization. The last one we did in 2019 in Kosice (Slovakia), I was very fortunate to work with Ron Francis and Domenic Nicoletta, both from the Sault. That was a lot of fun to work with those guys every day. The people are the best part of the job, hands down.”