The tragic tale of the Edmund Fitzgerald

In this edition of Remember This, the Sault Ste. Marie Public Library looks back on a notorious November storm
Nov 4, 2018 11:00 AM By: Remember This? 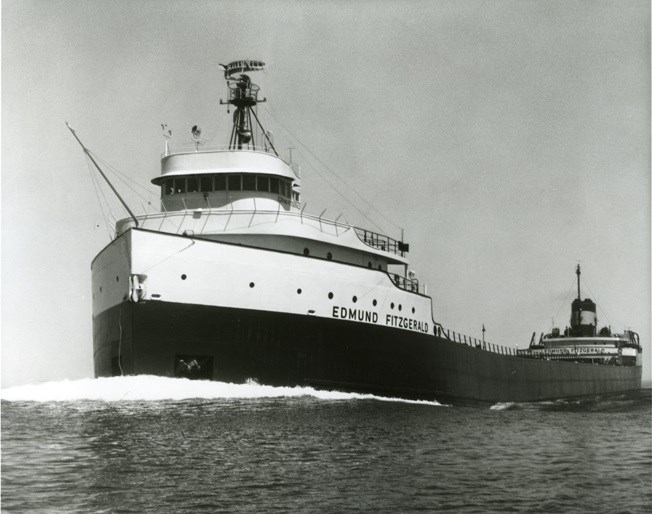 The Edmund Fitzgerald was built in the 1950s and launched on June 7, 1958.  It was owned by the Northwestern Mutual Life Insurance Co., and was named after the president of that company.

She commanded attention early on for her size – being just one foot less than the maximum allowed through Soo Michigan’s MacArthur Lock and for her elegant furnishings.

However, right from the beginning, the ship was apparently plagued by bad luck.  According to some accounts, it took several tries to break a bottle of champagne to christen the ship, a negative omen. When the vessel first launched, it entered the water at a strange angle, causing a wave that soaked the crowds that had gathered. One man suffered a heart attack, dying during the launch of the ship.

Once she was safely in the water, though, things seemed to look up. She quickly broke records, including one for the amount of ore shipped through the Soo Locks. While there were a handful of incidents throughout the ship’s history – including becoming grounded near the Soo Locks in 1969 and hitting the wall of the locks on multiple occasions in the 1970s – nothing caused any serious damage to the ship.

On Nov. 8, a storm started to brew over Oklahoma. For all intents and purposes, it was predicted to be a “typical” storm in November. By the evening of Nov. 9, however, warnings went out about gale-force winds on Lake Superior. By Nov. 10, storm warnings were in effect.

In Sault Ste. Marie, the reports came in of hurricane-force winds; they knocked out power, blew away at least one carport, and shattered glass. Crews had to clear over 100 trees off roadways and power lines, and many homes and vehicles suffered damage from falling limbs. Traffic crossing the International Bridge was slowed, largely due to a camper that had blown off a truck. Businesses closed, and the opening night of Fiddler on the Roof at Korah Collegiate had to be postponed.

A representative for the city described the storm to a Sault Star reporter as “quite a breeze.”

But, of course, the storm became notorious for the damage it caused out on the water.

Because of the treacherous weather, the Soo Locks closed, and reports came in that water was washing over the gates. Out on the lake, the wind picked up, and with it came heavy rain and snow. Giant waves – at one point, estimated in excess of 30 feet – buffeted the Edmund Fitzgerald, carrying a full load of ore pellets, as well as the nearby freighter, the Arthur M. Anderson.

Throughout the afternoon, the captain of the Edmund Fitzgerald, Ernest McSorley, radioed the Arthur M. Anderson to report that there was minor damage to the Fitzgerald and it was listing slightly. The ship was taking on a bit of water, but the pumps were working to clear it. Radar had been knocked out, and the captain had to rely on communication with the Arthur M. Anderson to help navigate the storm.

However, while Captain McSorley sounded exhausted over the radio, he never let on that the ship was in serious trouble. Around 7:10 p.m., he reported that “we are holding our own.”

That was the last communication heard from the Edmund Fitzgerald. Shortly after that, near Whitefish Bay, she vanished off radar. The Arthur M. Anderson reported that her lights had disappeared. The Captain was not responding over the radio.

Search efforts were delayed but started by water that night. Because of the dangerous conditions, the weather was too severe for the Coast Guard boats that would normally be used. The Coast Guard was forced to contact the commercial freighters in the area, asking them to return to the area in which the Fitzgerald was last seen; among them was the Arthur M. Anderson, turning back into the terrifying storm.

Crews also searched by air and along the shoreline, looking for wreckage and hoping to find survivors. The OPP combed the shores of Pancake Bay. The Coast Guard received calls about a person in Canadian waters, floating with the aid of a log, sparking hopes that there were survivors of the wreck. That report turned out not to be accurate.

The Edmund Fitzgerald’s wreckage would be found on November 14, its location discovered due to an oil slick and the use of a magnetic anomaly detection unit to confirm something large sitting beneath the water.

All 29 crew members aboard the Edmund Fitzgerald perished in the storm. There were no survivors, and none of their bodies have been recovered from the wreck.