In this edition of Remember This, the Sault Ste. Marie Public archive puts the spotlight on a man that legend has it could defend a client in court with a handful of words jotted on the flap of a pack of cigarettes
Nov 18, 2018 11:00 AM By: Remember This? 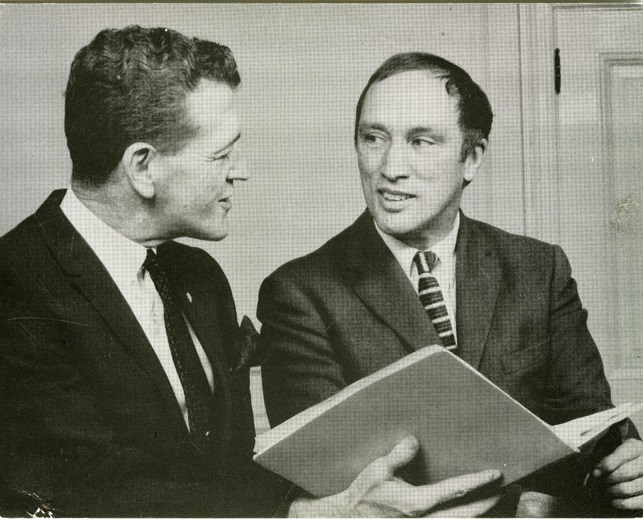 Saultite C. Terrence Murphy accomplished much throughout his life including the roles of lawyer, judge, politician and father.

Terry Murphy was born in Sault Ste. Marie in 1926, the oldest of five children. His father, Charlie, was a prominent Sault resident, managing a clothing store, serving on the PUC Board as well as being elected to city council.

As for Terry, he got his political start early in life. Before the age of ten, he was already going door to door, handing out pamphlets for a Liberal candidate . . . and removing materials from other candidates when he could!

Terry Murphy proved himself to be a bright pupil, skipping two grades in elementary school and graduating from Sault Collegiate Institute at sixteen. While it was anticipated he would enter the seminary, he soon realized his interests lay elsewhere. After completing his BA in philosophy, he studied law at Osgoode Hall.

In 1949, at the age of 22, he became the youngest Osgoode Hall graduate to become a lawyer. He soon began practicing law in Sault Ste. Marie, working with George Majic out of their law firm in the Elizabeth Wilcox building.

It was around this time that he met Dorothy Jenkins. The two would soon marry in a ceremony officiated by Terry Murphy’s uncle, Monsignor Henry Murphy. Terry and Dorothy would go on to have five children, Sean, Timothy, Karen, Mary and Michaela.

He balanced his growing family with his work in law and politics. Early in his legal career, he successfully appealed a death sentence for one of his clients. In doing so, he made history: previously all Sault Ste. Marie lawyers in that position would have retained counsel from Toronto to go to the Court of Appeal but instead Terry argued the case himself.

As a lawyer, he took on an eclectic mix of cases. However, he always gravitated toward criminal law and the courtroom. Rumour had it, he could defend a client in court with a handful of words, written on the flap of a Players-brand cigarette pack, (he stated that he smoked Winchesters), but never contested that he could argue a case with very few notes. His knowledge of the legal process and his confidence allowed him to run his defenses eloquently.

Later, this anecdote would be recounted in the book Learned Friends: A Tribute to Fifty Remarkable Ontario Advocates, 1950-2000, in which Terry Murphy was featured.

He entered the world of municipal politics, running for and being elected to city council in 1965. After serving one term, he tried his hand at federal politics. In 1968, he ran for federal office, representing the Liberals in Sault Ste. Marie, with Trudeaumania in full swing.

His campaigning methods proved to be a popular choice: he outfitted a bright orange van with carpets and tables. When he pulled up in a neighbourhood, he would offer coffee and cookies to anyone interested in talking politics with him. According to a Sault Star article, bright and early in the morning, housewives with rollers still in their hair descended upon the van, eager to try the refreshments and meet with “Murph.” He brought along nine workers with him to offer child care to these young mothers.

One of his major rivals in the election was Progressive Conservative candidate Russ Ramsay, a close friend of his. During the campaign, the two even showed up for a civic event in nearly-identical clothes – according to the Globe and Mail, their suits were made from the same bolt of cloth by the same tailor – leading to headlines that nicknamed them the “Bobbsey twins.”

Terry Murphy won the election, serving a term in the House of Commons. During his time as MP, his first speech in the House involved honouring fellow Saultite Phil Esposito for his achievements in hockey. He served on several parliamentary committees: Justice; Company of Young Canadians; Labour, Manpower and Immigration; and Defence and Foreign Affairs. While serving on the latter committee, he also became president of NATO’s North Atlantic Assembly, acting as a spokesman on the world stage. He travelled to the various NATO countries, which even afforded him and his wife the opportunity to have a private meeting with the Pope in Italy.

He also became known as a tenacious politician who was not afraid to challenge the Liberal caucus when he didn’t agree with their decisions. According to a parliamentary observer, “If there is one thing that Terry is, it’s a scrapper.”

In 1980, after 31 years of practicing law, he was appointed as judge for the District Court in Manitoulin and moved to Sudbury to begin a new chapter in his career.

During his time as a judge, he was described by a colleague as being “on the cutting edge of interpreting the Charter.”  He remained a judge until his retirement in 2000, after which he moved back to Sault Ste. Marie. He passed away in 2008.

Find out more of what the Public Library has to offer at www.ssmpl.ca and look for more Remember This? columns here he was described by a colleague as being “on the cutting edge of interpreting the Charter.” He remained a judge until his retirement in 2000, after which he moved back to Sault Ste. Marie.  He passed away in 2008.