The interesting and tumultuous history of Gros Cap

This edition of Remember This, looks at what has been written about an area that is scenic but also culturally significant
Jul 9, 2020 11:00 AM By: Remember This? 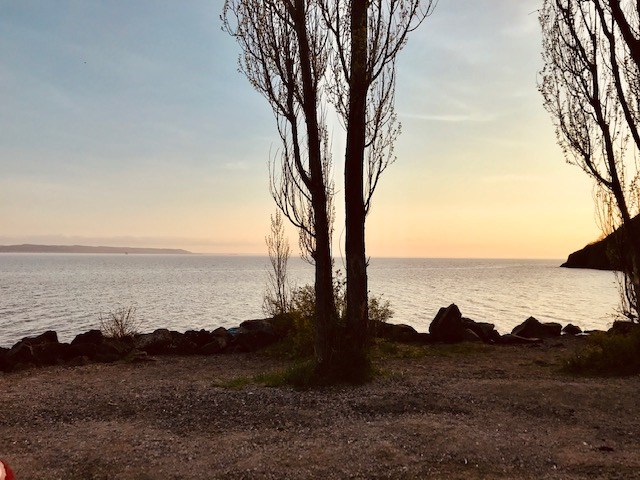 How much thought do we give to the history of the scenic places that we’re drawn to?

Located at the western extremity of Prince Township on Highway 550, Gros Cap is not only a place of scenic beauty but also carries a long and interesting history that began thousands of years ago.

The first people to inhabit the lands were Indigenous peoples, likely drawn by the whitefish and lake trout along the shoals and shoreline opposite the Gros Cap bluffs.

Originally there would have been seasonal dwellers along the lakeshore and then throughout the harsh winter months inhabitants likely moved to the more sheltered inland wooded areas. The number of artifacts that have been recovered by amateurs over the past years is considered to be proof of earlier inhabitants.

Items that have been collected indicate the time period to be as far back as the Archaic Period (over 2,500 BC). Throughout history there have been many semi-permanent Indigenous establishments. One particular artifact that was found on the bluffs indicates the time period to be the Middle and Late Woodland cultural periods, (400 BC to AD 800). This particular site was named the Metal Toad Site for the type of artifact that was found there.

The location is thought to have been in use from 500 BC to AD 1,500 and was likely situated in a sheltered location surrounding a spring and stream along the first beach, East of the Cap or toe of the bluffs. Thousands of artifacts have been excavated from the site and reside with the Royal Ontario Museum and in private collections. Some of the artifacts include prehistoric tools such as decorated pottery fragments, fish spears, beads, knives, flint arrowheads and native copper awls. Artifacts that were found here suggest that it could have been a fishing and canoe building location. In the early 1970s most of the area known as the Metal Toad site was destroyed by bulldozers due to plans for a proposed trailer park. However, the trailer park for the site never transpired.

Artifacts found in the area also support a European presence and suggest Voyageurs used it as a resting point when weather became too rough to continue on their journey. There is a reference in a Voyageur’s journal of the 1680s to stopping at Gros Cap for breakfast and transferring to larger canoes for the dangerous Lake Superior voyage.

Gros Cap was the point where travellers could prepare for the open water expanse that lay before them. Numerous Voyageurs recorded and remarked on the scenic beauty of Gros Cap. Its location was first recorded on a map in Charlevoix’s journal titled, Journal d’un Voyage dans l’Amerique Septemrinalle.

From the towering point of Gros Cap, the view of Lake Superior is spectacular. Gros Cap on the Canadian side of the river and Iroquois Point on the American side, face each other across the Southern entrance to Whitefish Bay. Although extremely picturesque, there was at one time, a dark presence that permeated this area. Across the water to the south was known as the place of Iroquois bones or Nadowawegoning. A critical battle was fought between the Iroquois and Ojibwe during the bloody Iroquois Wars of the 1600’s.

In 1662, the Ojibwe from around the Great Lakes gathered together to protect their area in an attempt to stop the approaching Iroquois. They had learned that the Iroquois had invaded the North Channel and were headed toward Superior. Ojibwe scouts scoured the waters below the St. Mary’s Rapids as they watched the Iroquois torture and take prisoners up through the rushing waters. After their gruesome attack, the Iroquois transported the dead bodies up the south shore where they set up their night camp directly across from Gros Cap.

The fires and sounds of celebrations were a target for the soon-to-be invading Ojibwe who patiently watched. In the dark waters, the Ojibwe stealthily made their advancement across Whitefish Bay in their war canoes.

As dawn approached and the Iroquois began to fall asleep, the Ojibwe quietly beached their canoes. A night of seemingly victorious celebrations was met by the opposing tribe. A massacre ensued and all but two Iroquois had been killed. The remaining two were kept alive but had their noses and ears ceremoniously cut off and sent east in their canoe to relay a message. According to the source, SUPERIOR: Under the Shadow of the Gods, the Ojibwe were successful in sending a clear message to the Iroquois. Invasions of their land would not be tolerated.

However, another source, Gros Cap : Ancient Home, Meeting Place, Rare Natural Beauty: A gem at risk tells that in 1668 the Iroquois invaded once again and devastated all the villages of Lake Superior.

If you’re out for a Sunday drive this summer and you find yourself at beautiful Gros Cap, you’ll undoubtedly be awed by the refreshing water, the clear air and the towering bluffs that comprise part of the Canadian Shield. As you look across to Whitefish Bay, enjoy the peace. Feel the calmness that the area brings to you and appreciate that this area is rich in history.