Remember This looks back on the royal visit, which included lunch at the Algonquin
Oct 14, 2018 11:00 AM By: Remember This? 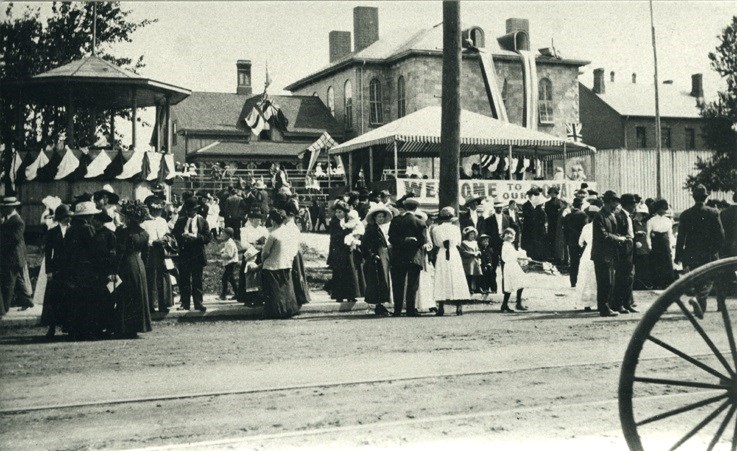 The front of the Old Court House and Jail during the visit of the Duke and Duchess of Connaught 1912. Sault Ste. Marie Public Library photo

In 1912, the Duke and Duchess of Connaught spent a month touring Canada, with one of their stops including Sault Ste. Marie, where the Duke would be officially declaring the Sault to be a city.

The Duke – also known as Prince Arthur – was the third son and seventh child of Queen Victoria and Prince Albert.  The year before, in 1911, he had been chosen as Canada’s tenth Governor General, a role that he would hold until 1916.

Together, the new Governor General, his wife Princess Louise Margaret of Prussia, their youngest daughter Princess Patricia of Connaught, and ten others in the royal party left on a tour of Canada’s West. Starting from Rideau Hall in Ottawa, they went as far as Victoria, BC, stopping at “every point of importance in the West” according to the Sault Star.

Newspaper articles leading up to the event spoke glowingly about the preparations the city was undertaking – cleaning Queen Street from any mud and trimming any unruly weeds that would spoil the scenery. Due to the construction occurring on Steelton roads, tours of that municipality would be limited.

Official decorators, Messrs. Robert and Robert, were brought in from Montreal to help beautify the city, with the goal of making it as colourful “as a maple bush after the fall visits of Jack Frost,” according to the Sault Star.  Robert and Robert coordinated arches, flag streamers, bunting, and other bright decorations to give the city a celebratory feel. People also decorated their homes and businesses, in a display of decorating “enthusiasm… never before equalled here.”

The Sault Star also wrote that Mayor W.H. Munro was in search of anyone “who [has] seen active service in any capacity and who may claim to the term [veteran],” adding that “the more medals they have the better.”  The veterans present included some who had served in Egypt, in India, and during the Fenian Raids.

Also praised in the newspapers was the preparation and participation of Reverend Fuller and the children at the Shingwauk Residential School; the school would be highlighted during the tour. Arches and flags would decorate the school grounds. In front of the newly-painted bandstand, one child would read a short welcome message when the Governor General arrived; others would carry more flags and sing God Save the King.

As planned, the Duke, Duchess and the rest of the royal procession arrived in Sault Ste. Marie on August 29. From the CPR station, they went to the court house, where a crowd had gathered to greet them. The official ceremony involved patriotic musical performances, public addresses, and a great deal of fanfare as Prince Arthur formally declared Sault Ste. Marie to be a city.

Also included in the trip was a tour of the steel plant and the pulp and paper mill. In addition to that, there were two receptions held at Montfermier, a mansion originally built by F.H. Clergue but owned by the Talbott family at that point. One reception was for the ladies in the royal party; the other included the gentlemen as well.

The Governor General attended a luncheon at the Algonquin Hotel; accompanying him was a long list of prominent Sault Ste. Marie residents, among them Colonel Penhorwood, J.W. Curran, and a number of politicians.

The visit was short, with the royal party only staying for a day, heading west by train the following morning. However, it was not the first time the Governor General had visited in Sault Ste. Marie, approximately thirty years previously; he had passed through the area. An editorial in the Sault Star marvelled at how much things must have changed since then, describing the Soo as hardly recognizable and a far cry from the “struggling outpost of civilization” it used to be.

Over the past decades, it had become a place fit for royalty – or, at least, a short royal visit.