Snow, snow and more snow. The great winter of 1923

This edition of Remember This looks back on another winter that just kept on going
Remember This? Apr 8, 2018 11:00 AM

Winter comes and winter goes but by the spring of 1923, it had broken records.

At the time, the Algoma region could be expected to receive 70 inches of snow over the course of an average winter.

But by April of 1923, the total snowfall amount had been officially measured at 105 inches or nearly nine feet, according to an article in the Sault Star from the time.

There was 30 inches of snow still on the level ground, although snowdrifts in the city were eight feet high, with some even reaching to 10 feet high.

On April 9, 1923, the temperature was said to be “five below zero”, but keep in mind at that time Canada was still using the Imperial system. So, although -5 degrees Celsius falls within normal temperature ranges for early spring, five below zero Fahrenheit measures close to -21 C.

If the temperature wasn’t cold enough to halt trains, the amount of snowfall that spring was.

The snow storm of April 7 and 8 of that year stopped freight trains for three days, and passenger trains were cancelled or delayed due to large amounts of snow covering the track. Some drifts had been measured at more than 10 feet in depth.

Trapper Tony Swartz tells a story of a large moose which strayed into his yard at Mile 60, and collapsed due to starvation and exhaustion. The snow reached over the moose’s shoulders. It had been reported too that both deer and moose were being preyed upon by wolves after having no more energy to flee or fight them off. 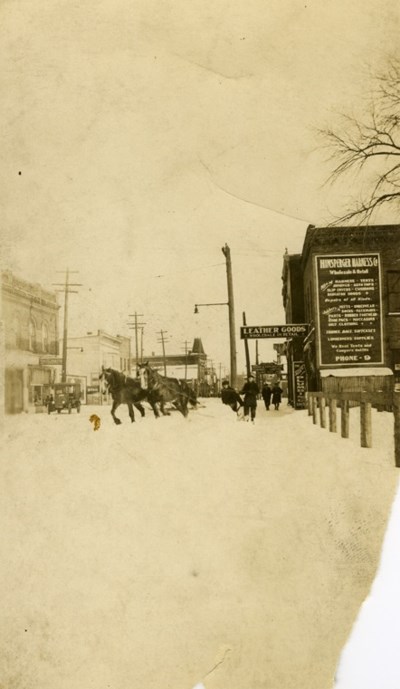 Horses work to clear Queen Street of snow in the aftermath of a massive winter storm in April, 1923. Sault Ste. Marie Public Library archive photo
The moose and deer were not the only ones feeling penned in. The roads were also in poor condition for traveling into the Sault. Farmers from surrounding townships told the Sault Star at the time, that they had “never seen a winter like this.”

Fences were buried under the snow, and chicken-coops had nearly disappeared. Mail boxes which stood five feet above ground had to be dug out to access them.

Worse yet, it had been reported that some families in the rural areas had not been outdoors all winter long. In town, Great Northern Road from MacDonald to Bruce Street was closed on Monday April 9, 1923, by order of City Engineer Brown.

At that time there was a large ravine which was completely covered in snow. In some spots the snow was 18 feet deep, making it impossible for vehicles and pedestrians to get through the area. Men were busy each day keeping the ditches clear to prevent the city from flooding when the weather finally warmed up.

The Engineering Department urged citizens to keep the ditches clear in front of their homes. It was felt that the west end of the city would be affected the most, as it had been reported that the snow drifts there had reached some second floor windows and snow plow drivers said they were “able to look into the upstairs windows of the houses” while plowing the streets.